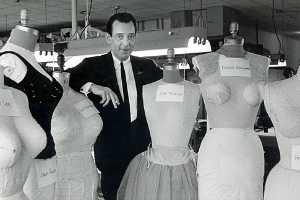 American fashion designer, film producer and director, dancer and choreographer. Loper worked his way up through the ranks to become a designer whose fashions are still appreciated today.

Born into the wealthy Hard-Loper family, the second of two brothers, he was never interested in school work and his grades were abysmal. His artistic side was evident from a very young age and he attended dancing school voluntarily. His parents sent him to the Feigan School in England at age 12. Saddled with private tutors and strict discipline, after four years he ran away. With self confidence and grandiose dreams he tried out for the London Ballet even though his only experience was with social dancing. He won a part and toured England and the Continent. He came back to the U.S. at 17 and performed with the Chicago Civic Ballet for one season. He started drinking in his teens and professed a love of champagne for breakfast "spiked" with orange juice. He was able to drink a great amount without seeming drunk. Wanting to experience Broadway, he headed for New York City. At 18 he had a solo dance act and a seven-month engagement at the Adlon Hotel in Berlin, paid $500 per week which was a fortune in 1925. Loper was offered parts in "Ziegfeld Follies of 1927," "A Connecticut Yankee" and "Present Arms," but his Uncle, Lincoln George, a heavy investor in Broadway shows, had him blackballed as he was a snob and felt that show business was beneath the station of a Hard-Loper.

Don did odd jobs for $50 per week for three years. In 1931 he talked another uncle into investing in a school that taught music, art, dance and drama. With his genius for organization they succeeded so well they branched out twice. Growing tired of teaching, he organized a dance band of 18 members in 1935. Earning about $3000 per week he quit one step ahead of union trouble.

With Beth Hayes as his dance partner, the Radio City Music Hall was the next step on the ladder. He designed all of her costumes, following his motto that "Women should look like women." His designs were always treasured for their feminine look. After dancing in luxurious hotels in the east and in Europe the team was featured on Broadway in "One For the Money," "Very Warm For May" and "All In Fun." Turning to producing, the Copacabaña in New York signed Loper to dance, design costumes and produce the floor show. At a time when other clubs were seeing how little their dancers could wear, Loper designed exquisite evening gowns and cocktail dresses for the Copa dancers. After his two-year contract, Ginger Rogers wanted him for the film "Lady In The Dark," but he wasn't interested. He was hired by MGM and given a six-way contract to produce, direct, choreograph, perform and design costumes and scenery. At this point he agreed to work with Ginger. When his contract expired in 1946 he took on a partner, Charles Northrup, and opened a salon in Beverly Hills. Loper was designing clothes to enhance the body, and dressing some of Hollywood's biggest stars. When Lana Turner married Bob Topping, she purchased a $120,000 trousseau; however designing $25,000 gowns did not provide a bread and butter income. Ready-to-wear dresses, suits, men's wear, cologne and lamps were his mainstay.

Saying there was no money in haute couture, his company grossed $15 million a year for creating garments for the public. Working at a fantastic pace with his physical stamina and high-tension mental ability, he was able to design anywhere and had no office or desk. As an interior designer his work in the Beverly Hilton Hotel can still be seen. He also worked on the Roney Plaza in Miami Beach. Loper had a closet full of identical suits, white pleated shirts, black silk ties and patent dance pumps. A tiny rose completed his fashion look each day. Always the super showman, his living room was decorated in black and seven shades of white. On 2/28/55 Don appeared on the "I Love Lucy" show as himself. In the story line Lucy purchases one of his dresses.

He married Vye Hughes when he was 17. The marriage lasted eight years. His second marriage lasted three years and his third, a brisk three months. He blamed himself for the marriage breakups as his heart and soul were in his career.

Loper died in 1972. His fashions are still prized today in vintage clothing stores. The Fashion Institute of Design and Merchandising in California has two of his gowns in their Best of the Best Collection.