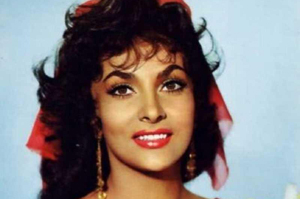 Lollobrigida is one of four daughters of a furniture manufacturer (her sisters are Giuliana, Maria and Fernanda). She spent her youth in a picturesque mountain village. In her youth, Gina did some modeling, and from there she went to participate successfully in several beauty contests. At around this time, she began appearing in Italian language films. In 1947, Gina entered the Miss Italy pageant and came in 3rd place. The contest was won by Lucia Bosé and second place was Gianna Maria Canale - they would both go on to be actresses though neither would come near Lollobrigida's success.

It is rumoured that after seeing her in a film, eccentric millionaire mogul Howard Hughes had her flown to Hollywood in 1947 though if this happened, it did not result in her staying in America. Instead she stayed in Italy and in 1949 she married a Slovenian physician, Mirko Skofic. (They had one son, Mirko Skofic jr, and were divorced in 1971). Her appearance in Italian films brought her to the attention of Hollywood and she made her first American film, Beat the Devil, in 1953. As her popularity increased, Lollobrigida earned the nickname "The World's Most Beautiful Woman" after her signature 1955 movie.

She made another notable appearance in Trapeze with Burt Lancaster in 1956 and starred in The Hunchback of Notre Dame the same year. In 1959 she co-starred in Frank Sinatra's Never So Few (she is rumoured to have had an affair with Sinatra) and in 1961 made one of her most popular films, Come September, with Rock Hudson.

She co-starred with him again in 1965's Strange Bedfellows and appeared alongside Alec Guinness in 1966's Hotel Paradiso. In 1968 she starred in the enjoyable Buona Sera, Mrs. Campbell with Shelley Winters, Phil Silvers, and Telly Savalas. By the 1970s her film career had wound down and she appeared in only a few, fairly poorly received productions in the early part of the decade.

By this time she had embarked on what was to turn out to be a successful career as a photographic journalist. She photographed, among others, Paul Newman, Salvador Dalí and the German national football team and scooped the world's press by obtaining an exclusive interview with Fidel Castro. In 1973 a collection of her work was published, Italia Mia.

Still focusing on other interests, including sculpting, it was 1984 before she returned to American television screens with a part in Falcon Crest. She made a few minor film appearances in the 1990s and in 1999 she ran unsuccessfully for one of Italy's 87 seats in the elections for European Parliament. She was also a corporate executive for fashion and cosmetics companies.

Now virtually retired from acting, she has not made a film since 1997, she told Parade magazine in April 2000: "I studied painting and sculpting at school and became an actress by mistake .... I've had many lovers and still have romances. I am very spoiled. All my life, I've had too many admirers."

In October 2006, at age 79, she announced to Spain's ¡Hola! magazine her engagement to a 45-year-old Spanish businessman, Javier Rigau y Rafols, whom she met at a party in Monte Carlo in 1984. . The engagement was called off on 6 December 2006 due to media pressure around the event .