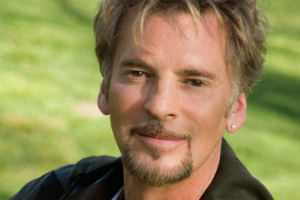 Loggins is the youngest of three sons born to Robert, a traveling salesman (who died in 1983) and Lina, a homemaker in Everett, Wash. He attended parochial schools in several states as his family moved with his dad's jobs.

Early tunes written for the Nitty Gritty Dirt Band led to a fruitful partnership (five platinum and two gold records) with guitarist Jim Messina. The group "Loggins and Messina" started with the album "Sittin' In," which became popular so rapidly that it forced the group to tour and record. The band emerged as a people's band rather than that of the critics, until Loggins went solo in 1976.

He made a solo debut of "Celebrate Me Home" which also went Gold. He toured with Fleetwood Mac in 1977 and had a smash-hit single "I'm Alright" in 1980. Achieving a high level of popularity by touring extensively, Loggins played guitar and provided gentle love songs such as "Danny's Song."

His first marriage was to Eva Ein, mother of Crosby (1981?), Cody (1982?) and Isabella (1989?) He met colonic therapist Julia Cooper in 1984 when he was a patient. They split from their respective spouses and moved in together in 1990, then married in 1993 and wrote a book about it: "The Unimaginable Life: Lessons Learned on the Path of Love."

The book was based on entries from their separate journals. Their children include son Lukas, born in 1993 and daughter Hana Aluna, born on 9/29/1997, Los Angeles.