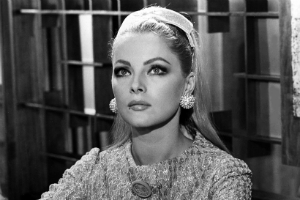 Virna Lisi (born 8 November 1936 in Ancona) is a Cannes and César award-winning Italian film actress. She was born in Ancona, Marche, as Virna Lisa Pieralisi.

Virna Lisi began her film career in her teens. She was discovered in Paris by two Neapolitan producers, Antonio Ferrigno and Ettore Pesce. Her debut was in La corda d'acciaio (The line of steel, 1953). Initially, she did musical films, like in E Napoli canta (Napoli sings, 1953) and the successful Questa è la vita (1954, with the popular Totò). Nonetheless, her beauty was more valued than her talent, as in Le diciottenni and Lo scapolo films of 1955. Yet she filled demanding roles, particularly in La Donna del Giorno (1956), Eva (1962), and the Italian-made spectacle Romolo e Remo (1961).

In the late 1950s, Lisi did theater at Piccolo Teatro di Milano in I giacobini by Federico Zardi under the direction of Giorgio Strehler. During the 1960s, Lisi did comedies and participated in television dramas that were widely viewed in Italy. Lisi also promoted a toothpaste brand on television with a slogan that would become a catchphrase among Italians: "con quella bocca può dire ciò che vuole" (with such a mouth, she can say whatever she wants).

Hollywood producers sought a new Marilyn Monroe, and so Lisi debuted in Hollywood comedy as a blue-eyed blonde temptress opposite Jack Lemmon in How to Murder Your Wife (1965) and appeared with Tony Curtis in Not with My Wife, You Don't! (1966). Lisi then starred with Frank Sinatra, in Assault on a Queen (1966), in La Ragazza e il Generale, co-starring with Rod Steiger, and in two films with Anthony Quinn, The Secret of Santa Vittoria, directed by Stanley Kramer, and the war drama The 25th Hour. She also gained attention for a photo of her shaving her face that appeared on the March 1965 cover of Esquire magazine.

Indeed, to overcome her typecast just of a seductive woman, Virna Lisi sought new types of roles, of evil women or of a lover in relationships of disparate age for example. In those years, Virna Lisi participated in Italian productions, in Casanova 70 and Le bambole (1965), Arabella (1967), and Le dolci signore (1968). Lisi also starred in The Birds, the Bees and the Italians (1965) which shared the Palme d'Or at Cannes that year.

In the early 1970s, Virna Lisi decided temporarily to attend to her family, husband Franco Pesci and her son Corrado, born in July 1962. Nonetheless, a career renaissance occurred soon for Virna with a large list of productions, including Al di là del bene e del male (1977), Ernesto (1979), and La cicala (1980). For the film La Reine Margot (1994), Lisi portrayed a malevolent Catherine de' Medici and so she won both the César and Cannes Film Festival awards, along with a Silver Ribbon for Best supporting Actress.

A Brazilian rock band, Virna Lisi, is named after her. The 1980s Argentinian band Sumo (led by Luca Prodan), made a song for her. The singer's brother is the actor Andrea Prodan, who appeared with her in the movie I ragazzi di via Panisperna (1988).