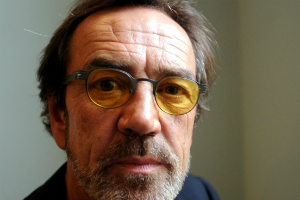 Robert Lindsay (born Robert Lindsay Stevenson on 13 December 1949) is an English actor known for his stage and television work, including appearances with the Royal Shakespeare Company, and in musical theatre, and his roles as Wolfie Smith in Citizen Smith, Ian Frazier in Wimbledon and Ben Harper in My Family. He has won a BAFTA, a Tony Award and three Olivier Awards for his work.

Lindsay was born in Ilkeston, Derbyshire, to Norman and Joyce Stevenson. Lindsay was one of three children and his father was a World War II veteran, having been a minesweeper on one of the first ships to land on D-Day. After leaving Gladstone Boys' School, Lindsay enrolled in the drama department of Clarendon College in Nottingham, intending to become a drama teacher. However, friends at Nottingham Playhouse encouraged him to apply to Royal Academy of Dramatic Art (RADA), and in 1968 he was accepted there with the aid of a government grant. After graduation he worked as dialect coach for a repertory company in Essex, and then joined a regional theatre group.

Lindsay first came to prominence as the cockney layabout Jakey Smith in the ITV comedy series Get Some In!. He was given the starring role as delusional revolutionary Wolfie Smith in the BBC sitcom Citizen Smith (1977–80) which gave him a high profile at the time.

Towards the end of the run of Citizen Smith, Lindsay began to gain roles in the BBC Television Shakespeare series, including Lysander in A Midsummer Night's Dream (1981) and Benedick in Much Ado About Nothing (1984). He played Edmund in the Granada Television production of King Lear (1983) with Sir Laurence Olivier.

Lindsay played the role of Bill Snibson in the hugely acclaimed 1984 London revival of Me and My Girl (for which Lindsay won an Olivier Award) which subsequently transferred to Broadway, earning him a Tony Award (against competition from performers in Les Misérables on both occasions).

Lindsay's success on Broadway and in the West End led to the starring role in the film Bert Rigby, You're a Fool (1989), although it was not a commercial success. However, he continued to enjoy success on television, and played the leading role in Alan Bleasdale's dark comedy serial G.B.H. (1991), for which he won a BAFTA for his performance. He was also in Bleasdale's Jake's Progress (1995) the tale of a couple (Robert Lindsay and Julie Walters) struggling to cope with a 'difficult' child (Barclay Wright). Both Bleasdale serials were screened by Channel 4, as was the surreal Channel 4 sitcom Nightingales (1990–93), which also featured David Threlfall and James Ellis. In 1996 he played the title role of Becket, the play by Jean Anouilh, opposite Derek Jacobi as King Henry II for which he won another Olivier Award. Lindsay won his third Olivier award after he took over the role of Fagin during 1997 in Cameron Mackintosh's London revival of Oliver! at the London Palladium.

He appeared in the films Fierce Creatures (1997) and Divorcing Jack (1998). In 1998 he was cast in the recurring role of Captain Pellew in the ITV mini-series Hornblower, based on the novels of C.S. Forester a series which ran until 2003. He was also the original choice for the lead role in the drama Cracker, but turned the part down as he did not want to become too associated with heavyweight, darker drama characters. He later appeared as Fagin in the 1999 ITV Oliver Twist miniseries.

Lindsay's longest running role has been Ben Harper in the popular BBC sitcom My Family (2000–11), in which Zoe Wanamaker played his on-screen wife, Susan.

In October 2005 he starred in an ITV drama series Jericho, about a Scotland Yard detective investigating murder and kidnapping in London's Soho in the 1950s. In January and February 2006, he was the only actor (as Sneath) to appear in two loosely linked Stephen Poliakoff dramas, Friends and Crocodiles and Gideon's Daughter, shown on BBC One.

He has also portrayed Prime Minister Tony Blair in the Channel 4 satires A Very Social Secretary and The Trial of Tony Blair. In 2003 he appeared in an episode of Absolutely Fabulous, and also narrated the BBC documentary series Seven Wonders of the Industrial World (2003).

Lindsay appeared in the 8th Ricky Gervais Video Podcast in which Gervais announced that Lindsay would be in the second series of Extras. He appeared in the last episode of the series (transmitted in 2006) playing an arrogant, mean-spirited version of himself. He also appeared in the romantic comedy Wimbledon, as the tennis club manager who hires Peter Colt. In 2007 at the Old Vic Theatre, Lindsay played Archie Rice in John Osborne's The Entertainer, a role first performed by Olivier in 1957. In 2009 he played the protagonist, Maddox, from the Radio 4 comedy Electric Ink by Alistair Beaton.

In 2010 he starred in the title role of Derby Live's production of Onassis before its transfer to London's West End. Lindsay stars as The Examiner in the British sitcom Spy which debuted in October 2011 on Sky 1. (He is to return to the cast in 2012 for a second series.) In November 2011 he starred as Henry in a revival of The Lion in Winter by James Goldman at the Theatre Royal, Haymarket, London, a production which also featured Joanna Lumley as Eleanor, and was directed by Trevor Nunn.

In 2012 he appeared in the Sky detective television series Falcón, episode "The Silent and the Damned", as Pablo Ortega.

Lindsay sings the recorded version of Derby County F.C.'s song "Steve Bloomer's Watchin'", played and sung by the fans at the beginning of every home game, and usually at the start of the second half and after a good win.

In 1974 Lindsay married Cheryl Hall, who later appeared alongside him in Citizen Smith. They divorced in 1980, when he started a long-term relationship with actress Diana Weston, with whom he has a daughter, Sydney Laura Stevenson, who co-starred with him in three episodes of My Family.

Lindsay researched his family tree in the third series of Who Do You Think You Are?, which aired on 13 September 2006. He travelled to his hometown and to Turkey, where his grandfather Raymond Dunmore had taken part in the Gallipoli campaign during World War I. Lindsay has been a lifelong supporter of Derby County, a fact which he stated in a short section for CBBC's Newsround entitled 'My Team'.

Lindsay is known for his left-wing politics. He usually describes himself as a staunch socialist, and has marched in the past in support of miners. He was an outspoken critic of Prime Minister Tony Blair's decisions to go to war in Afghanistan and Iraq, saying he was "furious" and now feels disillusioned with mainstream politics: "You see those images of Iraq and Afghanistan and Lebanon, don't you? And I suspect somewhere, when he goes home at night and the kids are in bed, he must go, Jesus, what have I done?"