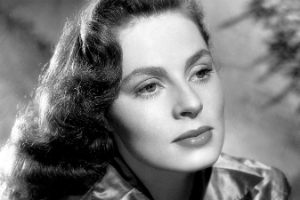 Lindfors was born in Uppsala, Sweden, the daughter of Karin Emilia Therese (née Dymling) and Axel Torsten Lindfors. She trained at the Royal Dramatic Theatre School, Stockholm. Soon after, she became a theater and film star in Sweden. She moved to the United States in 1946 after being signed by Warner Bros. and began working in Hollywood. She appeared in more than one hundred films including Night Unto Night, No Sad Songs for Me, Dark City, King of Kings, Creepshow, The Sure Thing, and Stargate.

She appeared with actors such as Ronald Reagan, Jeffrey Hunter, Charlton Heston, Lizabeth Scott and Errol Flynn. She also appeared on television, including the 1959 episode "The Temple of the Swinging Doll" of the NBC espionage drama Five Fingers, starring David Hedison. Later, she had a recurring role on the ABC series Life Goes On, for which she won an Emmy Award. Lindfors appeared with Joseph Cotten and Ward Bond in the 1957 film The Halliday Brand. One of her last performances was in the original Stargate film in which she played the role of Catherine Langford.

An original and mesmerizing stage presence, her roles ranged from Strindberg to Shakespeare to the musical Pal Joey.

In 1962, she shared the Silver Bear for Best Actress award with Rita Gam at the Berlin Film Festival, for their performances in Tad Danielewski's No Exit.

She was married four times: to Harry Hasso, a Swedish cinematographer; Folke Rogard, a Swedish attorney and World Chess Federation president; Don Siegel, the director; and George Tabori, a Hungarian writer, producer and director. She had three children: two sons (John Tabori with Hasso, and the actor Kristoffer Tabori, with Siegel) and a daughter (Lena Tabori, with Rogard).

In the last years of her life, she taught acting at the School of Visual Arts in New York, and had a lead role (essentially playing herself) in Henry Jaglom's Last Summer in the Hamptons (1995). The same year she returned to her native Sweden to perform in the play In Search of Strindberg. She died there of rheumatoid arthritis at the age of 74, and was buried there. In New York, a service was held at the Actors Studio where Gene Frankel spoke to an audience about his respect and affection for her.