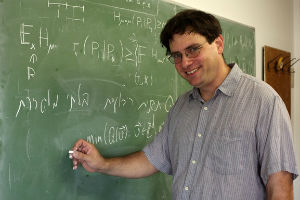 Elon Lindenstrauss (born August 1, 1970) is an Israeli mathematician, and a winner of the 2010 Fields Medal.

Since 2004, he has been a professor at Princeton University. In 2009, he was appointed to Professor at the Mathematics Institute at the Hebrew University.

Lindenstrauss attended the Hebrew University Secondary School and continued his studies at the Hebrew University, where he earned his BSc in Mathematics and Physics in 1991 and his Master's degree in Mathematics in 1995. He enlisted to the Talpiot program. In 1999 he finished his Ph.D. (his thesis: "Entropy properties of dynamical systems" under the guidance of Prof. Benjamin Weiss). He was a member at the Institute for Advanced Study in Princeton, New Jersey, then a Szego Assistant Prof. at Stanford University. From 2003 to 2005, he was a Long Term Prize Fellow at the Clay Mathematics Institute.

Lindenstrauss works in the area of dynamics, particularly in the area of ergodic theory and its applications in number theory, with Anatole Katok and Manfred Einsiedler he made progress on proving the Littlewood conjecture.

In a series of two papers (one co-authored with Jean Bourgain) he proved Peter Sarnak's Arithmetic Quantum Unique Ergodicity conjecture.