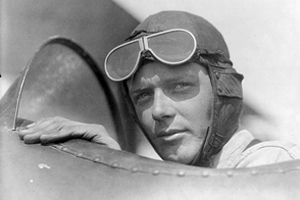 Charles Augustus Lindbergh (4 February 1902 – 26 August 1974), known as "Lucky Lindy" and "The Lone Eagle," was an American pilot famous for the first solo, non-stop flight across the Atlantic, from Roosevelt Field, Long Island, NY to Paris in 1927 in the "Spirit of St. Louis."

In the ensuing deluge of notoriety, Lindbergh became the world's best-known aviator. Charles Lindbergh is a recipient of the Medal of Honor.

In the years prior to World War II, Lindbergh was a noted isolationist, and was a leader in the America First Committee to keep the U.S. out of the coming war. Nevertheless, he flew combat missions in the Pacific Theater as a consultant. In later years, Lindbergh took an active role in the environmental movement.

Charles Lindbergh was selected as Time Magazine's "Man of the Year" in 1927, the first holder of that title.
Shortly after Lindbergh made his famous flight, the Stratemeyer Syndicate began publishing the Ted Scott Flying Stories (1927- 1943) by Franklin W. Dixon wherein the hero was closely modeled after Lindbergh.
Charles A. Lindbergh (1927) was a UK documentary by De Forest Phonofilm based on Charles A. Lindbergh's landmark flight.
A song called "Lindbergh (The Eagle Of The U.S.A.)" was released soon after the 1927 flight. A multitude of other songs included the title "Lucky Lindy" were also released in the aftermath of the Atlantic crossing. Tony Randall, not particularly known for singing, but a fan of old songs, revived the song,"Lucky Lindy", in the 1960s in a collection of jazz-age and depression era songs that he recorded.
The dance craze, the "Lindy Hop" became popular after his flight, and was named after him.
40,000 Miles with Lindbergh (1928) was a documentary featuring Charles A. Lindbergh.
The Agatha Christie book (1934) and movie Murder on the Orient Express (1974) begin with a fictionalized depiction of the Lindbergh baby kidnapping.
Verdensberømtheder i København (1939) was an English/Danish co-production starring Robert Taylor, Myrna Loy and Edward G. Robinson featured Charles A. Lindbergh as himself.
Woody Guthrie wrote a song called "Lindbergh" on "The Asch Recordings Vol. 1" recorded in the 1940s.
The 1942 film, Keeper of the Flame, starring Katharine Hepburn and Spencer Tracy, features Hepburn as the wife of a Lindbergh-like national hero who is secretly a fascist. He intended to use his influence, especially over America's youth, to turn the country into a fascist state and eliminate inferior races. It appears it had been inspired by the controversy surrounding Lindbergh.
James Stewart played Lindbergh in the biographical The Spirit of St. Louis (1957), directed by Billy Wilder.
The American Experience - Lindbergh: The Shocking, Turbulent Life of America's Lone Eagle (1988) was a PBS documentary directed by Stephen Ives.
The song "All That Jazz" (from the award winning 2002 film Chicago (2002 movie)) has a reference in the line "I Betcha Lucky Lindy Never Flew So High."
The Philip Roth novel The Plot Against America (2004) is a speculative fiction novel which explores an alternate history where Franklin Delano Roosevelt is defeated in the 1940 presidential election by Charles Lindbergh.