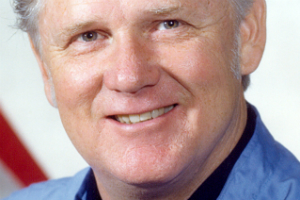 Don Leslie Lind (born May 18, 1930 in Midvale, Utah) is an American scientist and a former NASA astronaut.

Lind attended Midvale Elementary School and graduated from Jordan High School. He received a Bachelor of Science degree with high honors in physics from the University of Utah in 1953. At the United States Navy Officer Candidate School Lind jokingly requested flight training and was unable to change his assignment, but found that he enjoyed flying. As a Naval Aviator, Lind volunteered to take high-altitude photo emulsions of cosmic rays for the University of California, Berkeley during flights. This helped him enroll at Berkeley, where Lind researched pion-nucleon scattering in the Lawrence Radiation Laboratory and earned a Doctor of Philosophy degree in Physics in 1964. He performed his post-doctoral study at the Geophysical Institute, University of Alaska, from 1975 to 1976.

Lind held the rank of Commander in the Naval Reserve. He received his Wings of Gold in 1957 and served four years on active duty with the Navy at San Diego and later aboard the carrier USS Hancock. During that time Lind logged more than 4,500 hours of flight time, 4,000 of which were in a jet aircraft.

From 1964, Lind worked at the NASA Goddard Space Flight Center as a space physicist. He was involved in experiments to determine the nature and properties of low-energy particles within the Earth's magnetosphere and interplanetary space. Lind applied for NASA's third group of astronauts but did not have enough flight hours, and was too old for the fourth group. After the age restriction changed, he was among the fifth group, the "Original Nineteen", selected in April 1966.

—Lind, on his role as backup for Skylab 3 and 4

Although pilots comprised the Original Nineteen (unlike the fourth and sixth groups, which included only scientists), Deke Slayton assigned Lind to science-related tasks due to his doctorate. For the Apollo program he helped to develop the tools used on the lunar surface, and was a possible crewman of one of the canceled missions. Lind served as backup pilot for Skylab 3 and Skylab 4, the second and third manned Skylab missions; was on standby for a rescue mission planned when malfunctions developed on Skylab 3; and was a possible crewman of Skylab B.

For the shuttle program Lind was also a member of the Astronaut Office's Operations Missions development group, responsible for developing payloads for the early Space Shuttle Orbital Flight Test (OFT) missions, and the Canadarm. He finally flew as a Mission Specialist on STS-51-B (April 29 to May 6, 1985), logging over 168 hours in space. Lind waited longer than any other American for his first spaceflight, 19 years. 16 members of the Original Nineteen, as well as 14 in later astronaut groups, flew in space before him.

Lind left NASA in 1986 and for nine years served as a professor of physics and astronomy at Utah State University.

In addition to his duties as payload commander, with the help of his Alaska postdoctoral group Lind developed and conducted an experiment to photograph the Earth's aurora. As the experiment used a camera already on the shuttle, NASA only needed to purchase three rolls of film for $36; Lind described it as "the cheapest experiment that has ever gone into space." After completing 110 orbits of the earth, the Orbiter Challenger landed at Edwards Air Force Base, California, on May 6, 1985.

Lind is member of the American Geophysical Union, the American Association for Advancement of Science, Phi Kappa Phi, and an Eagle Scout. He was also awarded the NASA Exceptional Service Medal in 1974.

Lind married Kathleen Maughan of Logan, Utah with whom he had seven children. His interests include amateur theatricals, play writing, and painting, and he is also an avid swimmer and skier.

Lind has served as a member of the lay ecclesiastical hierarchy of The Church of Jesus Christ of Latter-day Saints. He served as a missionary in the Northeastern United States before graduating from college, and after STS-51-B spoke in General Conference about his experience. While in Cache Valley as a professor at USU, he also served as a bishop. He has also served in subsequent assignments, including a term as a counselor to the president of the Portland Oregon Temple while his wife served as an assistant to the matron, and living in England for a year in 1988.