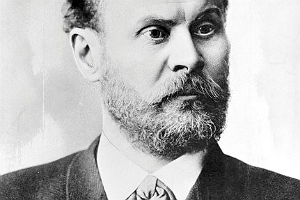 Otto Lilienthal (23 May 1848 – 10 August 1896) was a German pioneer of aviation who became known as the Glider King. He was the first person to make well-documented, repeated, successful gliding flights. He followed an experimental approach established previously by Sir George Cayley. Newspapers and magazines published photographs of Lilienthal gliding, favorably influencing public and scientific opinion about the possibility of flying machines becoming practical. For his contributions to the field of aviation at such a crucial time he is often referred to as "The Father of Flight."

He died of injuries sustained when his glider stalled and he was unable to regain control; falling from about 15 m (50 ft), he fractured his neck.

Lilienthal was born in Anklam, Pomerania Province, German kingdom of Prussia. He attended grammar school in Anklam, and also studied the flight of birds with his brother Gustav (1849–1933). Fascinated by the idea of manned flight, Lilienthal and his brother made strap-on wings, but failed in their attempts to fly. He then attended the regional technical school in Potsdam for two years and trained at the Schwarzkopf Company before becoming a professional design engineer. He would later attend the Royal Technical Academy in Berlin.

In 1867, Lilienthal began his experiments on the force of air in earnest, interrupted when he volunteered to serve in the Franco-Prussian War. As a staff engineer in various engineering companies, Lilienthal received his first patent for a mining machine. Five years later he founded his own company to make boilers and steam engines. Lilienthal published his famous book Birdflight as the Basis of Aviation in 1889.

Lilienthal was born to middle-class parents. They had eight children, but only three of them survived infancy: Otto, Gustav, and Marie. The brothers worked together all their lives on technical, social and cultural projects.

On 6 June 1878, Lilienthal married Agnes Fischer, daughter of a deputy. Music brought them together; she was trained in piano and voice while Lilienthal played the French horn and had a good tenor voice. After marriage, they took up residence in Berlin and had four children: Otto, Anna, Fritz and Frida.

Lilienthal's greatest contribution was in the development of heavier-than-air flight. He made his flights from an artificial hill he built near Berlin and from natural hills, especially in the Rhinow region.

The filing of a U.S. Patent in 1894 by Lilienthal directed pilots to grip the "bar" for carrying and flying the hang glider. The A-frame of Percy Pilcher and Lilienthal echoes in today's control frame for hang gliders and ultralight aircraft. Working in conjunction with his brother Gustav, Lilienthal made over 2,000 flights in gliders of his design starting in 1891 with his first glider version, the Derwitzer, until his death in a gliding crash in 1896. His total flying time was five hours.

At the beginning, in 1891, Lilienthal succeeded with jumps and flights covering a distance of about 25 metres (82 ft). He could use the updraft of a 10 m/s wind against a hill to remain stationary with respect to the ground, shouting to a photographer on the ground to manoeuvre into the best position for a photo.In 1893, in the Rhinow Hills, he was able to achieve flight distances as long as 250 metres (820 ft). This record remained unbeaten for him or anyone else at the time of his death.

Lilienthal did research in accurately describing the flight of birds, especially storks, and used polar diagrams for describing the aerodynamics of their wings. He made many experiments in an attempt to gather reliable aeronautical data.

During his short flying career, Lilienthal developed a dozen models of monoplanes, wing flapping aircraft and two biplanes. His gliders were carefully designed to distribute weight as evenly as possible to ensure a stable flight. Lilienthal controlled them by changing the centre of gravity by shifting his body, much like modern hang gliders. However they were difficult to maneuvre and had a tendency to pitch down, from which it was difficult to recover. One reason for this was that he held the glider by his shoulders, rather than hanging from it like a modern hang glider. Only his legs and lower body could be moved, which limited the amount of weight shift he could achieve.

Lilienthal made many attempts to improve stability with varying degrees of success. These included making a biplane which halved the wing span for a given wing area, and by having a hinged tailplane that could move upwards to make the flare at the end of a flight easier. He speculated that flapping wings of birds might be necessary and had begun work on such a powered aircraft.

While his lifelong pursuit was flight, Lilienthal was also an inventor and devised a small engine that worked on a system of tubular boilers. His engine was much safer than the other small engines of the time. This invention gave him the financial freedom to focus on aviation. His brother Gustav (1849–1933) was living in Australia at the time, and Lilienthal did not engage in aviation experiments until his brother's return in 1885.

There are 25 known Lilienthal patents.

In the beginning, Lilienthal's training area was a hill formation called "Maihöhe" in Steglitz, near Berlin. He built a 4 metres (13 ft) high shed, in the shape of a tower, on top of it. This way, he obtained a "jumping off" place 10 metres (33 ft) high. The shed served also for storing his apparatus.

In 1894, Lilienthal built an artificial conical hill near his home in Lichterfelde, called Fliegeberg (lit. "Aviator's Hill"). It allowed him to launch his gliders into the wind no matter which direction it was coming from. The hill is 15 metres (49 ft) high. There was a regular crowd of people that were interested in seeing his gliding experiments.

In 1932, the Fliegeberg was redesigned by a Berlin architect Fritz Freymüller as a memorial to Lilienthal. On top of the hill was built a small temple-like construction, consisting of pillars supporting a slightly sloping round roof. Inside is placed a silver globe inscribed with particulars of famous flights. Lilienthal's brother Gustav and the old mechanic and assistant Paul Baylich attended the unveiling ceremony on August 10, 1932 (40 years after Otto's death).

Reports of Lilienthal's flights spread in Germany and elsewhere, with photographs appearing in scientific and popular publications. Among the those who photographed him were pioneers such as Ottomar Anschütz and American physicist Robert Williams Wood. He soon became known as the 'father of flight' as he had successfully controlled a heavier than air aircraft in sustained flight.

Lilienthal was a member of the Verein zur Förderung der Luftschifffahrt, and regularly detailed his experiences in articles in its journal, the Zeitschrift für Luftschifffahrt und Physik der Atmosphäre, and in the popular weekly publication Prometheus. These were translated in the United States, France and Russia. Many people from around the world came to visit him, including Samuel Pierpont Langley from the United States, Russian Nikolai Zhukovsky, Englishman Percy Pilcher and Austrian Wilhelm Kress. Zhukovsky wrote that Lilienthal's flying machine was the most important invention in the aviation field. Lilienthal corresponded with many people, among them Octave Chanute, James Means, Alois Wolfmüller and other flight pioneers.

On 9 August 1896, Lilienthal went as on previous weekend to the Rhinow Hills. The day was very sunny and not too hot (about 20°C). The first flights were successful, reaching a distance of 250 metres (820 ft) in his normal glider. During the fourth flight Lilienthal's glider stalled. He tried to re-establish lift by swinging his body back to correct the attitude of the glider. That maneuver failed and he fell from a height of about 15 metres (49 ft), while still in the glider.

Paul Beylich, Lilienthal's glider mechanic, transported him by horse-drawn carriage to Stölln, where he was examined by a physician. Lilienthal had a fracture of the third cervical vertebra and soon became unconscious. Later that day he was transported in a cargo train to Lehrter train station in Berlin, and the next morning to the clinic of Ernst von Bergmann, one of the most famous and successful surgeons in Europe at the time. Lilienthal died there a few hours later (about 36 hours after the crash); his last words to his brother Gustav were "sacrifices must be made."

Otto Lilienthal was buried at Lankwitz public cemetery in Berlin.

Lilienthal's research was well known to the Wright brothers, and they credited him as a major inspiration for their decision to pursue manned flight. However, they abandoned his aeronautical data after two seasons of gliding and began using their own wind tunnel data.

"Of all the men who attacked the flying problem in the 19th century, Otto Lilienthal was easily the most important. ... It is true that attempts at gliding had been made hundreds of years before him, and that in the nineteenth century, Cayley, Spencer, Wenham, Mouillard, and many others were reported to have made feeble attempts to glide, but their failures were so complete that nothing of value resulted."

In September 1909, Orville Wright was in Germany making demonstration flights at Tempelhof aerodrome. He paid a call to Lilienthal's widow and, on behalf of himself and Wilbur, paid tribute to Lilienthal for his influence on aviation and on their own initial experiments in 1899.

Lilienthal plays a major part (in absentia) in Theodora Goss's short story "The Wings of Meister Wilhelm," nominated for a World Fantasy Award and published in her anthology In the Forest of Forgetting.

A fictional characterization of Lilienthal was resurrected as an evil clone in the Japanese Read or Die (2001) novels, anime, and manga.

Lilienthal is mentioned as a "great scientist" in the video game Civilization Revolution.