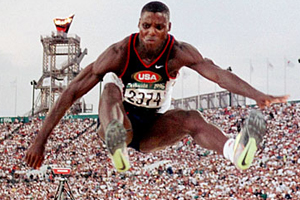 American track and field athlete. He moved into Olympic history in Los Angeles in 1984 by matching Jesse Owen's all time record of four Gold Medals. He received the awards for the long-jump, 100-meter dash, 200-meter dash and the 400-meter dash. In the Atlanta Olympics, 1996, he won Gold in the long jump and placed 3rd in the 100 m Van Damme Memorial.

He is a member of a black, all-American family with two brothers, Mackie and Cleve, and a sister, Carol, who are all champions. Mackie, born in 1955, holds the country record in the 200 m. and Cleve, born 1956, is a winner of All American soccer at college. His baby sister Carol was the winner of the Bronze Medal at the World Games in Helsinki for holding the record on the indoor long jump.

His folks ran a track club from the time Carl and Carol were seven and five, respectively. The two kids were inseparable as youngsters, and Carol would follow her big brother to track meets.

A showman and exceptional athlete, he burst onto the scene in 1979 as a long jumper. Carl had an unbroken streak of 65 straight wins in the long jump before losing to Mike Powell in 1991. At Barcelona, 1992, he won his third Gold Medal in the Long Jump. A superstar sprinter as well, he spent a decade as the world's fastest man. He reached an astonishing 28 mph to win the 100 meter dash during the 1984 games.

At the Tokyo Olympics, he won the 100-meter dash, completing his set of six Olympic and six World Championship Gold Medals.