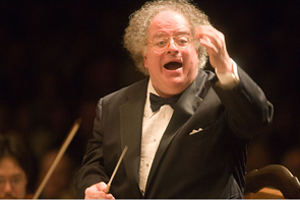 Early years
Levine was born in Cincinnati, Ohio to a musical family: his maternal grandfather was a cantor in a synagogue, his father was a violinist, who led a dance band, and his mother was an actress. He began to play the piano as a small child. At the age of 10, he made his concert debut as soloist in Felix Mendelssohn's Piano Concerto No. 2 at a youth concert of the Cincinnati Symphony Orchestra.

Levine subsequently studied music with Walter Levin, first violinist in the La Salle Quartet. In 1956 he took piano lessons with Rudolf Serkin at the Marlboro Music School, Vermont. In the following year he began studies with Rosina Lhévinne at the Aspen Music School. After graduating from Walnut Hills High School, the acclaimed magnet school in Cincinnati, he entered the Juilliard School of Music in New York City in 1961, and took courses in conducting with Jean Morel. He graduated from the Juilliard School in 1964 and joined the American Conductors project connected with the Baltimore Symphony Orchestra.

From 1964 to 1965, Levine served as an apprentice to George Szell with the Cleveland Orchestra and then served as assistant conductor until 1970. That year, he also made his debut appearance as guest conductor with The Philadelphia Orchestra at its summer home at Robin Hood Dell. He made his debut in that same year with the Welsh National Opera and the San Francisco Opera. Levine had a long association with the Chicago Symphony Orchestra and served from 1973 to 1993 as music director of the Ravinia Festival. In 1990, at the request of Roy E. Disney, he arranged the music and conducted the Chicago Symphony Orchestra in the soundtrack of Fantasia 2000 released by Walt Disney Pictures. He also served as music director with the Cincinnati May Festival (1974-1978).

Metropolitan Opera career
Levine made his Metropolitan Opera debut in June 1971 in a festival performance of Tosca. His success led to further appearances and to his appointment as its principal conductor in 1973. He then became music director in 1976. In 1983, he served as conductor and musical director for the Franco Zeffirelli screen adaptation of La Traviata, which featured the Met orchestra and chorus members. He became the company's first artistic director in 1986 , and relinquished the title in 2004.

Under his leadership, the Metropolitan Opera orchestra and chorus has become one of the finest operatic ensembles in the world, punctuated by the regular concert series for the orchestra and chamber ensembles he began at Carnegie Hall. On his recent appointment as General Manager of the Met, Peter Gelb emphasised that, even after 35 years as music director, something exceptional in the major opera houses of the world, James Levine would be welcome to remain as long as he wanted to direct music there. His present contract runs through the 2010/2011 season.

Levine has led the Metropolitan Opera on many domestic and international tours. The company telecasts several productions around the world each season and makes radio broadcasts on Saturday afternoons from December to April across North America.

Boston Symphony Orchestra
In October 2004, Levine was named music director of the Boston Symphony Orchestra (BSO), with an initial contract of 5 years, becoming the first American-born conductor to head the BSO. He now divides his time between New York and Boston. Thus, for the first time in living memory, the same conductor was in charge of the country's leading opera house and a major orchestra. In Europe, Herbert von Karajan performed a similar feat in the 1950s as chief conductor of the Berlin Philharmonic and director of the Vienna Staatsoper.

One unique condition that Levine negotiated was increased flexibility of the time allotted for rehearsal, allowing the orchestra additional time to prepare more challenging works. Since the start of his tenure, the orchestra has also established an "Artistic Initiative Fund" of about US$40 million to fund the more expensive of Levine's projects.

One criticism of Levine during his tenure in Boston is that he has not attended many orchestra auditions. A 2005 article reported that Levine had attended 2 out of 16 auditions during his tenure up to that time. Levine himself has responded that he has the ability to provide input on musician tenure decisions after the initial probationary period, and that it is difficult to know how well a given player will fit the given position until that person has had a chance to work with the orchestra: "My message is the audition isn't everything."

Another 2005 report stated that during Levine's first season as music director, the greater workload from the demands of playing more unfamiliar and contemporary music has increased physical stress with some of the BSO musicians. Levine and the players met to discuss this, and he agreed to program changes to lessen these demands. Levine has received general critical praise for revitalising the quality and repertoire since the beginning of his tenure.

Levine has had to deal with health issues in recent years, including sciatica and what he has called "intermittent tremors". On 1 March 2006, Levine fell onstage during a standing ovation after a performance with the Boston Symphony Orchestra and tore the rotator cuff in his right shoulder. Later that month, he underwent surgery to repair the injury. He returned to the podium on 7 July 2006, leading the Boston Symphony Orchestra at Tanglewood. In July 2008, the orchestra announced Levine's withdrawal from the majority of the 2008 Tanglewood season, because of the need for surgery to remove a kidney with a malignant cyst.

Conducting in Europe
Levine's Boston Symphony contract limits his guest appearances with American orchestras. However, Levine has conducted regularly in Europe, with the Vienna Philharmonic, Berlin Philharmonic, and at the Bayreuth Festival. Levine has also been a regular guest with the Philharmonia of London and the Dresden Staatskapelle. Since 1975, he has also conducted regularly at the Salzburg Festival and the annual July Verbier Festival. From 1999 to 2004, Levine was chief conductor of the Munich Philharmonic Orchestra, and was credited with improving the quality of instrumental ensemble during his tenure.

Levine also performs regularly in chamber music ensembles and as an accompanist in Lieder recitals.

Levine is Conductor Laureate of the UBS Verbier Festival Orchestra, the resident orchestra of the annual music festival based in Verbier, Switzerland, and has led that orchestra since it was organized in 2000. The Festival website describes Levine as “not only an esteemed conductor and an inexhaustible source of inspiration to the orchestra, but also a passionate teacher.” Levine himself has said in a 2004 interview:

"At my age, you are naturally inclined towards teaching. You want to teach what you have learned to the next generation so that they don't have to spend time reinventing the wheel. I was lucky that I met the right mentors and teachers at the right moment."

Since 2005 Levine serves also as Music Director of the Tanglewood Music Center, a summer academy of the Boston Symphony Orchestra. Conductors he has helped and influenced through his musical mentorship include Marco Armiliato, James Conlon, John Keenan and, most currently, Jens Georg Bachmann.