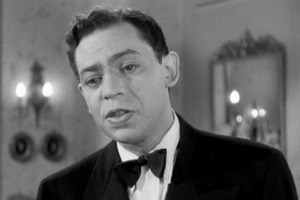 Oscar Levant (December 27, 1906 – August 14, 1972) was an American pianist, composer, author, comedian, and actor. He was as famous for his mordant character and witticisms, on the radio and in movies and television, as for his music.

Born in Pittsburgh, Pennsylvania in 1906 to an Orthodox Jewish family from Russia, Levant moved to New York in 1922, following the death of his father, Max. He began studying under Zygmunt Stojowski, a well-established piano pedagogue. In 1924, aged 18, he appeared with Ben Bernie in a short film, Ben Bernie and All the Lads, made in New York City in the DeForest Phonofilm sound-on-film system.

In 1928, Levant traveled to Hollywood where his career took a turn for the better. During his stay, he met and befriended George Gershwin. From 1929 to 1948 he composed the music for more than twenty movies. During this period, he also wrote or co-wrote numerous popular songs that made the Hit Parade, the most noteworthy being "Blame It on My Youth" (1934), now considered a standard.

Around 1932, Levant began composing seriously. He studied under Arnold Schoenberg and impressed him sufficiently to be offered an assistantship (which he turned down, considering himself unqualified). His formal studies led to a request by Aaron Copland to play at the Yaddo Festival of contemporary American music on April 30 of that year. Successful, Levant began composing a new orchestral work, a sinfonietta. He married actress Barbara Woodell; they divorced in 1932.

At this time, Levant was perhaps best known to American audiences as one of the regular panelists on the radio quiz show Information Please. Originally scheduled as a guest panelist, Levant proved so quick-witted and popular that he became a regular fixture on the show in the late 1930s and 1940s, along with fellow panelists Franklin P. Adams and John Kieran, and moderator Clifton Fadiman. "Mr. Levant", as he was always called, was often challenged with musical questions, and he impressed audiences with his depth of knowledge and facility with a joke. Kieran praised Levant as having a "positive genius for making offhand cutting remarks that couldn't have been sharper if he'd honed them a week in his mind. Oscar was always good for a bright response edged with acid".

In 1942, Levant premiered and recorded a one-movement piano concerto he had composed, accompanied by the NBC Symphony Orchestra.

From 1947 to 1949, Levant regularly appeared on NBC radio's Kraft Music Hall, starring Al Jolson. He not only accompanied singer Jolson on the piano with classical and popular songs, but often joked and ad-libbed with Jolson and his guests. This included comedy sketches. The pairing of the two entertainers was inspired. Their individual ties to George Gershwin -- Jolson introduced Gershwin's "Swanee" -- undoubtedly had much to do with their rapport. Both Levant and Jolson appeared as themselves in the Gershwin biopic Rhapsody in Blue (1945).

He also had a career as an actor, appearing in movies like Rhapsody in Blue (1945), The Barkleys of Broadway (1949) and An American in Paris (1951) where he was able to play original songs as well as deliver wise-cracks to Gene Kelly.

In the early 1950s, Levant was an occasional panelist on the NBC game show, Who Said That?, in which celebrities would try to determine the speaker of quotations taken from recent news reports.

Between 1958 and 1960, Levant hosted a television talk show on KCOP-TV in Los Angeles, The Oscar Levant Show, which later became syndicated. It featured his piano playing along with monologues and interviews with top-name guests such as Fred Astaire and Linus Pauling. A full recording of only two shows is known to exist, one with Astaire, who paid to have a kinescope recording of the broadcast made, so that he could assess his performance. This is likely the only Astaire performance to have imperfections, as it was live, and Levant would repeatedly change the tempo of his accompaniment to Astaire's singing during the bridges between verses, which appeared to get him quite off balance at first. He did not dance, as the studio space was extremely small.

The show was highly controversial, eventually being taken from the air after a comment about Marilyn Monroe's conversion to Judaism: "Now that Marilyn Monroe is kosher, Arthur Miller can eat her". He later stated that he "hadn't meant it that way". Several months later, the show began to be broadcast in a slightly revised format—it was taped in order to provide a buffer for Levant's antics. This, however, failed to prevent Levant from making comments about Mae West's sex life that caused the show to be canceled for good. Levant was also a frequent guest on Jack Paar's talk show, prompting Paar in later years to sign off by saying, "Good night, Oscar Levant, wherever you are." On an appearance on The Tonight Show, from New York, Levant once quipped that his Jaguar ambulance was waiting outside for him.

The 1920s and 1930s wit Alexander Woollcott, a member of the Algonquin Round Table, once said of him: "There isn't anything the matter with Levant that a few miracles wouldn't cure."

Open about his neuroses and hypochondria, in later life Levant became addicted to prescription drugs and was frequently committed to mental hospitals by his wife. Despite his afflictions, Levant was considered a genius by some, in many areas. (He himself wisecracked "There's a fine line between genius and insanity. I have erased this line.")

Levant withdrew increasingly from the limelight in his later years. He died in Beverly Hills, California, of a heart attack at the age of 65. His death was discovered by his wife when she went to get him from their bedroom to sit for an interview with Candice Bergen, a photo-journalist at the time. Levant was interred in the Westwood Village Memorial Park Cemetery in Los Angeles. In their routines, some comics have claimed, apocryphally, and citing an old joke, that hypochondriac Levant's epitaph is inscribed, "I told them I was ill."