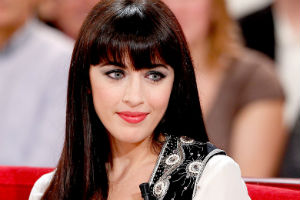 Nolwenn Leroy, (born 28 September 1982 in Saint-Renan, Finistère, France), is a French singer and songwriter, who rose to fame after winning the second series of the French television reality show, Star Academy. She has since recorded four studio albums and scored two number one singles, "Cassé" and "Nolwenn Ohwo!", on the French charts. In 2012, her album, Bretonne, was certified two times diamond for sales exceeding one million copies.

Leroy's parents left Saint-Renan when she was four years old. After living in Paris, Lille, and Guingamp, her mother, Murielle Leroy, and her younger sister, Kay, settled with Leroy's grandparents in Saint-Yorre. Her mother divorced from her father, professional footballer Jean-Luc Le Magueresse, in 1993.

Nolwenn studied at the "Collège des Célestins" in Vichy. When Leroy was eleven, her music teacher noticed her musical talents and encouraged her to learn the violin. At the age of thirteen she won "Les écoles du désert", a contest sponsored by the Cora supermarket chain, which allowed her to travel with a humanitarian mission from Gao to Timbuktu, Mali; she later claimed this had a profound influence on her.

In July 1998, Leroy was awarded a scholarship by the Vichy Rotary Club to travel to Hamilton, Ohio, as an exchange student. While attending Hamilton High School, she took music lessons at the Performing Arts School and became fluent in English during her stay there and had her first sexual experience. When she returned to France, she began classical singing classes at the Vichy music conservatory. In 2001, she enrolled in the University of Clermont-Ferrand to study law for a potential alternative career to music.

After watching the first series of the television reality show, Star Academy, in 2001, Leroy was impressed by Armande Altaï, one of the show's judges, and decided to join Altaï's singing classes. In 2002, Nolwenn was selected for the second season of the show. She was declared the overall winner, ahead of her fellow finalist, Houcine Camara, in December 2002.

Leroy's first album, Nolwenn, was released in March 2003 and was certified platinum by November for sales exceeding 300,000 copies. In 2006, the album was certified two times platinum by the Syndicat national de l'édition phonographique for more than 600,000 copies sold. Four songs from the album, "Cassé", "Une Femme cachée", "Suivre une étoile" and "Inévitablement" were released as singles. Leroy went on tour in France, Belgium and Switzerland in late 2003 to promote songs from the album.

Leroy's second album, Histoires Naturelles, was produced by Laurent Voulzy. Five singles were released from the album. "Nolwenn Ohwo!", written by Alain Souchon and Voulzy, topped the French music charts. The second single was the title track, "Histoire Naturelle". Music videos were made for both songs; the video for "Histoire Naturelle" expressed the main theme of the album with Leroy being portrayed as natural history museum exhibits. Of the other single releases, "Mon Ange" was distributed digitally while "J'aimais tant l'aimer" and "Reste Encore" were promotional-only. Songs from Histoires Naturelles and Nolwenn were performed on Leroy's second tour entitled "Histoires Naturelles Tour", which started in September 2006. Leroy's first live album was subsequently released in late October 2007.

Le Cheshire Cat & Moi was a project that began in 2007, co-written by Leroy and Teitur Lassen, with contributions from Jonatha Brooke, Michelle Featherstone, Mike Errico and Rupert Hine. It was arranged and produced by Lassen, and recorded in Sweden and the Faroe Islands. Leroy was observed to feature "a lighter sound than on previous releases" and the album gave the opportunity for her to write all the lyrics. The album was released in December 2009. A tour entitled "Le Cheshire Cat & Vous" to promote the record was held in 2010.

Leroy released a fourth studio album, Bretonne, on 6 December 2010. Cover versions of traditional celtic songs such as "Mná na h-Éireann", and contemporary songs such as Christophe Miossec's "Brest" were included on the album. Most of the songs related to Brittany, the singer's birthplace, four sung in Breton. Leroy collaborated with Jon Kelly for the musical arrangements. The album topped the French album charts for 7 weeks.

The album was re-released in November 2011 as a Deluxe Edition which added 7 English language tracks, including "Amazing Grace", "Scarborough Fair" and two Mike Oldfield tracks, "Moonlight Shadow" and "To France".

Nolwenn Leroy released her new album on the 26th of November 2012, along with her leading single "Juste Pour Me Souvenir". Like Bretonne, it contains Celtic inspired music but with more ocean themed lyrics. The song "Homeland" sung in English, contains the James Horner composed theme of the film Braveheart.

Reviews of the album were strong, with some praising Leroy's vocal ability and Celtic music and lyrics, noting that her singing in English and Breton was brave and proved her to be an evolving artist, with strong sales to match.

Leroy's music was studied for its neurological impact in geriatric populations. Researchers found that Leroy's recordings might have a more beneficial effect than other music, noting that: "the music of Nolwenn Leroy was found to be significantly superior to other music tested". To describe the phenomenon they coined the term the Nolwenn Effect, saying: "the music of Nolwenn Leroy appears to have a different effect on brain-based modulation of gait and stance than other music tested to date".

Mozart and Dutch and French singers were tested; only Mozart and Leroy's music were specified. The U.S. study was completed in February 2008, but no substantial results appear to be published.