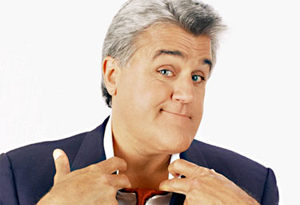 Early years
Jay Leno was born in New Rochelle, New York. His mother, Catherine Muir, was born in Scotland and came to the United States as an eleven year-old. His father, Angelo Leno, was born in New York to Nicolina Garafola and Pasquale Leno, immigrants from Flumeri, Italy. Leno grew up in Andover, Massachusetts, and received his Bachelor's degree in Speech therapy from Emerson College in 1973. In the late 1970's, he was the warm-up act for Johnny Mathis, Tom Jones and John Denver. He replaced Johnny Carson as host of The Tonight Show in 1992 and has planned to retire from The Tonight Show in 2009 and will be replaced by Conan O'Brien. During an August 1, 2007 interview with CNN journalist Anderson Cooper on The Tonight Show, Jay Leno confirmed that he is dyslexic.

Acting, cameos and voice acting
Leno is not widely known as an actor (legendarily, in auditioning for a role on Mork & Mindy which would go to Jay Thomas, he was told that he had a face that would scare children), but he had a number of small roles early in his career in mostly unsuccessful movies; an exception was a bit part in the more popular film American Hot Wax.

His most prominent role was in the 1989 film Collision Course, a comedy about a mismatched crime fighting pair, in which he played a detective opposite Pat Morita. When Steve Martin appeared on Leno's The Tonight Show in December 2005, a clip from the movie appeared during Martin's game of "Name That Clip" (Leno was supposed to differentiate clips from Martin's two new movies Shopgirl and Cheaper by the Dozen 2, with Martin taking twenty dollars from Leno if he got one wrong). The last clip played was from Collision Course, which Leno immediately said was "a horrible movie." Martin said Leno was right, but he would still lose twenty dollars for making it.

Leno also appeared in an episode of the television series Good Times, in which his character promotes getting tested for venereal diseases. He also appeared as one of the "pool guys" in the original 1977 version of Fun with Dick and Jane. He also appeared on other TV shows such as Laverne and Shirley and Alice.

Since becoming the host of the Tonight Show, Leno has made a number of cameo appearances, usually appearing as a talk show host or making fun of his famous chin. In 1993, Leno played the voice of the alien Vorb in the animated film We're Back! A Dinosaur's Story. In 1994, he played "Bedrock's Most Wanted Host," along with Cynthia Clemons, in the live-action comedy film The Flintstones. Also in 1994, he played himself in Major League II which starred Charlie Sheen.

In 1998, Leno made a series of appearances in conjunction with World Championship Wrestling as part of the nWo storyline. WCW executive (and nWo-executive in storylines) Eric Bischoff began a version of the Tonight Show on WCW Monday Nitro that he called "Nightcap", which featured much-maligned segments often including jokes at Leno's expense. Leno would respond with segments at the end of his monologue involving a short, old midget version of Hogan, whom he would make fun of. The storyline came to a head on the Tonight Show, where Hollywood Hulk Hogan and Bischoff appeared and attempted to "take over" the show after the last of the "old midget Hogan" segments, kicking Leno and Eubanks offstage prior to a commercial break. Diamond Dallas Page came to Leno's aid following the commercial break, and recruited Leno for a tag team match. The stipulations of the match were that if Leno wins, Bischoff ends Nightcap, but if Leno loses, he hands over the Tonight Show to Bischoff. At WCW Road Wild 1998, Leno and Page defeated Hogan and Bischoff with the help of Kevin Eubanks.

Also in 1998, he made a voice cameo as himself on an episode of The Simpsons entitled The Last Temptation of Krust. On The Simpsons Season 9 Boxset, he also is on the commentary for that episode. Leno also had a cameo in Family Guy in the episode Patriot Games, trying to kill Tom Brady of the New England Patriots for some unknown reason. Leno has made several cameos in the animated series South Park, once as a cat and twice as himself, the last two making fun of his chin. He also made appearances on the sitcoms The Drew Carey Show, Friends, The Nanny, Fresh Prince of Bel-Air, and Titus. Making fun of his own facial features, he plays the "Crimson Chin" on The Fairly OddParents. In 2005, he lent his voice to a talking fire hydrant in the computer animated movie, Robots.

He also made a cameo appearance for Fox NFL Sunday in a fictitious interview with prognosticator Frank Caliendo's impression of Terry Bradshaw. In 2006, he provided the voice of an armadillo named "Fast Tony" in Ice Age 2: The Meltdown, and in the Pixar/Disney film Cars he voiced "Jay Limo". He made a cameo appearance in an episode of TV sitcom Just Shoot Me!, in a fictitious interview with David Spade's character, Dennis Finch. He made at least one appearance on NBC's The West Wing playing himself at a California fundraiser for the president, Jed Bartlet. He has also appeared on Home Improvement as a mechanic in a wealthy car collector's garage (in reality his own collection).

He has also appeared as himself doing Tonight Show monologues regarding the main characters in the films Mr. 3000, Ed TV, Contact, Juwanna Mann, First Daughter, Dave, John Q, In & Out, Mad City, The Birdcage and The Astronaut Farmer. In the movie Space Cowboys, he hosted a fictional Tonight Show segment featuring the four astronaut protagonists (played by Clint Eastwood, James Garner, Tommy Lee Jones, and Donald Sutherland) just before their space mission. Later, in a case of life imitating art, the four actors appeared together on The Tonight Show to promote their film. He also appears in Wayne's World 2 interviewing Cassandra Wong (Tia Carrere) after she makes an appearance as a musical guest. He also did several car commercials in the 1980s.

Recently, he has appeared in the hit comedy Scrubs (TV series) as himself in one of main character J.D.'s daydreams. He appears when J.D. imagines his happy place being on the set of The Tonight Show replacing regular guitarist Kevin Eubanks.

Michael Jackson trial
In the 2005 trial of Michael Jackson over allegations of child abuse, Leno appeared as a defense witness (many celebrity defense witnesses had been expected, but Leno was one of the few who actually testified). As a witness in the case, Leno was initially not allowed to continue telling jokes about Jackson or the case, which had been a fixture of The Tonight Show's opening monologue in particular; however, he and his show's writers exploited a legal loophole by having Leno briefly step aside while stand-in comedians took the stage and told jokes regarding the trial. Stand-ins included Roseanne Barr, Drew Carey, Brad Garrett, and Dennis Miller, among others.

After NBC challenged the gag order, the judge permitted Leno to make jokes, as long as they were not related to his testimony. After the gag order was lifted, the next show featured a monologue entirely of Michael Jackson jokes.

In his testimony, the defense expected him to say he called police to say the accuser was coached by his mother to ask for money. Instead, Leno testified he never called the police, no money was asked for, and there was no coaching but that the calls seemed unusual and scripted.

Vehicle collection
In automobile collecting circles, Jay Leno is known as an avid student, collector and restorer of cars and motorcycles. He has a large antique car collection on which he constantly works in his spare time, and he routinely drives cars from his collection (including an original Stanley Steamer) from his home to his studio. He is also a promoter of the mechanical crafts through a column in Popular Mechanics and his educational activities.

The Blastolene Special is a 21-foot-long aluminum-bodied roadster powered by a V12 engine from an M47 Patton tank Leno bought from Blastolene Brothers. It was featured in the 2005 racing game Gran Turismo 4, and Monster Garage.

Leno's column in the American automotive magazine Popular Mechanics showcases his extensive car collection. Additionally, Leno uses his column as a platform to give advice about various automotive topics, including restoration and unique models, such as his jet powered motorcycle and solar powered hybrid.

Jay Leno's passion for classic automobiles led him to an affiliation with the Automobile Restoration Department at McPherson College. Today Leno serves on the National Advisory Board for the college's automotive restoration program and helps fund the Fred Duesenberg Memorial Scholarship.

Criticism
George Lopez attacked Leno during an interview on radio station WOMX-FM in Orlando on January 24, 2007. "He's the biggest two-faced dude in TV," Lopez said of Leno. He also called him a back-stabber and said he cannot interview guests well. Later, Comedian Paul Rodriguez claimed Leno approached him at a comedy club mistakenly believing he was fellow Latino comedian George Lopez (who has publicly criticized Leno). According to Rodriguez, Leno said; "Listen, maybe you and I should sit down and work this out. We shouldn't be airing this stuff in public." Rodriguez was reportedly hurt by Leno's mistake; "I've worked with him for going on 30 years. Our families know each other. I thought I was on the inside of Jay's circle. When Letterman was kicking his buns, I told my Latino viewers to support Jay. I don't know what makes people so forgetful. Maybe it's time for Conan to come on ."

Howard Stern has criticized Leno for stealing material from him, and for being such a "safe" interviewer. Most notably, Stern says Leno blatantly stole the idea for the 'Jaywalking' segment, where Leno asks people on the street basic intelligence/current event questions, from his show. Stern was also upset with Leno for poaching announcer "Stuttering" John Melendez from his staff.

Talk show host David Letterman has called Leno a "hump" and a "pinhead" on the Late Show.

In April, 2007, Leno was criticized by The Sons of Confederate Veterans organization over a monologue joke he made during the Don Imus scandal. Leno stated; "They say is still working on raising funds for his favorite charity, the sons of the Confederacy." Sons of Confederate Veteran's Commander in Chief Christopher Sullivan responded to Leno's statement saying, "While it is regrettable that Mr. Imus made his racially charged and derogatory comments about the Rutgers ladies basketball team, it is equally offensive that Mr. Leno would attack Southerners the way he did.