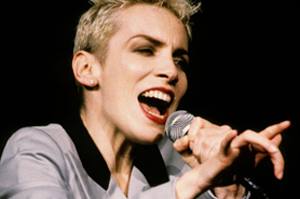 Annie Lennox (born 25 December 1954) is an Oscar, BRIT, Grammy and Golden Globe award-winning Scottish pop musician and vocalist. She is both a solo artist and the lead singer of the duo Eurythmics, often hailed as "The Greatest White Soul Singer Alive" (VH1, 100 Greatest Women of Rock and Roll 1999)

Life and career
Ann Lennox was born in Aberdeen, Scotland. She attended Aberdeen High School for Girls (now Harlaw Academy). She was educated as a classical musician and studied the flute at the Royal Academy of Music in London.

Her time at the Royal Academy was not entirely happy for her. Her flute teacher's final report stated: "Ann has not always been sure of where to direct her efforts, though latterly she has been more committed. She is very, very able, however." Two years later Lennox reported to the Academy: "I have had to work as a waitress, barmaid, and shop assistant to keep me when not in musical work." In 2006 the Academy made her an honorary Fellow. . In addition to this, in 2006, Lennox was made a Fellow of the Royal Scottish Academy of Music and Drama.

After three years as lead singer of The Tourists, Lennox achieved her most notable fame as the alto, soul-tinged lead singer of the 1980s electronic pop duo Eurythmics with English musician David A. Stewart. Early in Eurythmics' career, she was known for her androgyny, wearing suits and once impersonating Elvis Presley. The duo released a long line of classic singles in the 1980s: "Sweet Dreams (Are Made of This)", "Here Comes the Rain Again", "Who's That Girl?", "Would I Lie to You?", "There Must Be an Angel (Playing with My Heart)", "Missionary Man", "You Have Placed a Chill in My Heart", "Don't Ask Me Why", among others. Though Eurythmics never officially disbanded, Lennox made a fairly clear break with Stewart in 1990, and began a long and equally successful solo career.

From the beginning, Lennox has experimented with her image as an artist and as a woman. She matured as a public figure in the late 20th century, just as MTV and the medium of video were beginning as the obvious vehicles for selling contemporary popular music, and she has used image astutely, both as a means of interpreting and marketing her music.

Annie Lennox has also amassed a substantial fortune, said to be £30 million (GBP), over the years working both with Eurythmics and as a solo artist.

The father of her two daughters, Lola and Tali, is Uri Fruchtmann, to whom she was married from 1988 to 2000. She was previously married to Radha Raman from 1984 to 1985. Fruchtman was also the father to Lennox' first, stillborn, child Daniel in December 1988.

Solo work
Though it was produced by Stewart, the 1988 single from the movie Scrooged with Al Green, "Put a Little Love in Your Heart" (a cover version of Jackie DeShannon's 1969 hit), was credited to Lennox and Green, and can therefore be considered her first release as a solo artist. In 1991, her version of Cole Porter's "Ev'ry Time We Say Goodbye" appeared on the Porter tribute compilation Red Hot + Blue for AIDS awareness. Lennox performed the song that same year for a cameo appearance in the Derek Jarman film Edward II. She then made a memorable appearance with David Bowie and the surviving members of Queen at 1992's Freddie Mercury Tribute Concert at London's Wembley Stadium, performing Under Pressure.

She began working with former Trevor Horn protege Stephen Lipson, beginning with Lennox's 1992 solo debut album, Diva, was an unambiguous commercial and critical success. Her profile was boosted by Diva's singles (including "Why" and "Walking on Broken Glass"), numerous awards, and "Love Song for a Vampire", a soundtrack cut for Francis Ford Coppola's 1992 movie Bram Stoker's Dracula. The B-side of her single "Precious" was a self-penned song called "Step by Step", which was later covered by Whitney Houston for the soundtrack album of "The Preacher's Wife" and became a hit in its own right. Stephen Lipson has consistently been involved in Lennox's solo offerings, providing a sonic unity within her solo recordings that is seldom found in popular music and is most desirable to an artist's fanbase.

Her profile decreased for a period due to her desire to bring up her two children outside of the media's glare, although she continued to be a major figure in popular music. Medusa, an album of covers in which Lennox tackled songs by everyone from Bob Marley to The Clash, was released three years after Diva, and sold well, with its single "No More I Love You's" becoming an international hit and the 1995 Grammy winner for Best Female Pop Vocal Performance. A duet with Paul Simon of the latter's song 'Something So Right' made the UK Top 50 when released as a single. In 1997 she re-recorded the Eurythmics track "Angel" for the Diana, Princess of Wales tribute album. In 1998 - following the death of a mutual friend (the former The Tourists lead singer/songwriter Peet Coombes) - she re-established contact with Dave Stewart, and by 1999 Eurythmics had reformed for the album Peace. In 2003 she released her third solo album, Bare, which was accompanied by her first ever solo tour which played intimate venues all over the world.

In 2004, Lennox won the Academy Award for Best Song for "Into the West" from the film The Lord of the Rings: The Return of the King at the 76th Academy Awards. The song also won a Grammy award and a Golden Globe award as well. She had previously recorded "Use Well the Days" for the movie, which incorporates a number of quotations from Tolkien in its lyrics. This song was not used in the film, but it appears on a bonus DVD included with the "special edition" of the movie's soundtrack CD.

In the Summer of 2004, Annie Lennox embarked on an extensive North American tour with Sting

In July 2005, Annie Lennox performed at Live 8 in Hyde Park, London, along with Madonna, Sting and many of her peers.

Lennox and Stewart later collaborated on two new pieces for their Eurythmics hits album, Ultimate Collection, one of which, "I've Got a Life", was released as a single on October 31, 2005. The promotional video for the song features Lennox and Stewart performing in the present day, with images of past Eurythmics videos playing on television screens behind them. Lennox also appears in a man's suit with a cane, reminiscent of her "Sweet Dreams" video image from 1983. The single hit number fourteen in the UK singles chart and was a number-one U.S. Dance hit. Lennox has been awarded the most BRIT Awards for a woman, with a total of 7, including 1 as part of Eurythmics. The closest female artist to her number of awards is Lisa Stansfield with 3.

According to her official website, as of 2006, Lennox "is currently busy writing and recording songs to prepare for the next album, which will be her last whilst she is still contracted to BMG...". She is hoping to deliver an album "with twelve strong, powerful, really emotive songs that people can connect to." If she achieves that, she says, "I can feel proud of , no matter if it sells ten copies or 50 million."

In October 2006, Lennox spoke at the British House of Commons on the need for children in the UK to help their less fortunate counterparts in Africa.

It has been reported for three months, between July and October of 2006, Lennox worked in Dave Stewart's home studio in Los Angeles recording her new album. The producer of the new album is Glen Ballard, not Steve Lipson who produced Lennox's previous three albums. Ballard co-owns the Hollywood Boulevard studio with Stewart and it was Stewart who suggested Ballard to Lennox. Lennox and Stewart have not collaborated together on the said new album, except for a track with hip hop recording star, Kelis .

Lennox is reportedly lining up a duet with Mary J Blige. Annie and singer Pink have recorded a gospel-like track for Lennox's next album. The new album has been confirmed as being in the final mixing stage as of February, 2007, by Lennox herself on her official web site, and has confirmed that it will not be called Venus. During Celine Dion's break from her show in Las Vegas she recorded a new song with Lennox, possibly for the new album. Lennox's new album was confirmed by Ballard, to be due at the end of the third quarter of 2007, also commenting that it is nearly complete. Mixing on the new album was reported to be taking place in Miami by legendary industry mixer and Grammy winner Tom Lord-Alge.

On 24 May 2007 Annie confirmed via her website that her new album had been mastered, and a new website is currently being set up to prepare for its release later this year.

Music Videos
In her work with Eurythmics and her solo career, Lennox has produced an unusually large number of music videos. Her album Diva was accompanied by videos for every song but one, rather than the usual practice of only producing a video for the single releases. Actors Hugh Laurie and John Malkovich appear in the music video of Walking On Broken Glass, while the video to Little Bird paid homage to characters who had appeared in some of Annie's previous videos. Played by women (and some men in drag) including the Diva from Why, the Spanish senorita from Walking on Broken Glass, her androgynous orange-haired self from Sweet Dreams (are made of this) and the angel from There Must Be an Angel appear as well as several other noticeable characters.