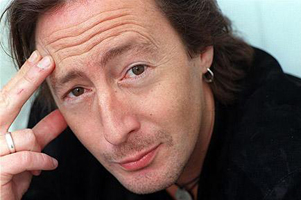 John Charles Julian Lennon (born 8 April 1963) is a British musician. He is the only child of John Lennon and Cynthia Powell (his father's first wife). The Beatles' manager, Brian Epstein, was his godfather. He has a younger half-brother, Sean Lennon. Lennon was named after his paternal grandmother, Julia Lennon. He remains close friends with his father's former bandmate Paul McCartney, though they experienced a public falling out in 2011 when Lennon was not invited to McCartney's wedding and reception even though many of his friends and acquaintances had been invited.

Lennon was the direct inspiration for three Beatles' songs: "Lucy in the Sky with Diamonds", "Hey Jude" and "Good Night". He is also devoted to philanthropic endeavors, most notably his own White Feather Foundation and the Whaledreamers Organization, both of which promote the co-existence of all species and the health and well-being of the Earth.

His sixth studio album Everything Changes was released on 3 October 2011.

Julian Lennon was born in Liverpool. Initially, the fact that John Lennon was married and had a child was concealed from the public, in keeping with the conventional wisdom of the era that female teenage fans would not be as enamoured of married male pop stars. Lennon inspired one of his father's most famous songs, "Lucy in the Sky with Diamonds", whose lyrics describe a picture the boy had drawn, a watercolour painting of his friend Lucy O'Donnell from nursery school surrounded by stars. Another composition of his father inspired by him was the lullaby "Good Night", the closing song of the White Album. In 1967, he attended the set of the Beatles' film Magical Mystery Tour.

Following his father's infidelity with Yoko Ono, Lennon's parents divorced when he was five. Paul McCartney wrote "Hey Jude" to console him over the divorce; originally called "Hey Jules", McCartney changed the name because he thought that "Jude" was an easier name to sing. After his parents' divorce, Lennon had almost no contact with his father until the early 1970s when, at the instigation of his father's then girlfriend, May Pang, he began to visit his father regularly. John Lennon bought him a Gibson Les Paul guitar and a drum machine for Christmas 1973, and encouraged his interest in music by showing him some chords.

Following his father's murder, Lennon voiced anger and resentment toward him, saying

I've never really wanted to know the truth about how dad was with me. There was some very negative stuff talked about me ... like when he said I'd come out of a whiskey bottle on a Saturday night. Stuff like that. You think, where's the love in that? Paul and I used to hang about quite a bit ... more than Dad and I did. We had a great friendship going and there seems to be far more pictures of me and Paul playing together at that age than there are pictures of me and my dad.

Lennon was included in his father's will as the beneficiary of a trust that he was to share equally with his brother Sean, with Yoko Ono as the trustee. Julian was annoyed that he had to buy mementos of his father at auctions. A settlement was eventually reached wherein Julian was given "a large but undisclosed sum". By 2009 Lennon's feelings toward his father had mellowed. Recalling his renewed relationship with his father in the mid-1970s, he said,

Dad and I got on a great deal better then. We had a lot of fun, laughed a lot and had a great time in general when he was with May Pang. My memories of that time with Dad and May are very clear — they were the happiest time I can remember with them.

Lennon made his musical debut at age 11 on his father's album Walls and Bridges playing drums on "Ya-Ya", later saying, "Dad, had I known you were going to put it on the album, I would've played much better!" He has subsequently had an inconsistent career as a musical artist. He enjoyed immediate success with his debut 1984 album Valotte. The album was produced by Phil Ramone. The album was nominated for a Grammy Award for Best New Artist in 1985, and produced two top ten hits, the title track "Valotte", and "Too Late for Goodbyes". Lennon promoted the album with music videos for the two hits made by movie director Sam Peckinpah and producer Martin Lewis. The song "Valotte" has remained a staple on adult contemporary radio stations since its release. After the release, Paul McCartney sent him a telegram wishing him good luck. Later that year, the two met up backstage at the New York studios of the TV show Friday Night Videos. His second album, 1986's The Secret Value of Daydreaming, was panned by critics, but reached number 32 on the Billboard magazine's album chart, and produced the single "Stick Around", which was his first #1 single on the U.S. Album Rock Tracks chart.

He recorded the song "Because", which was made famous by The Dave Clark Five, in the UK for Clark's 1986 musical, Time (the single is out of print). Lennon never reached the same level of success in the U.S. post-Valotte, but he hit number five in Australia with the 1989 single "Now You're In Heaven", which also gave him his second #1 hit on the Album Rock Tracks chart in the USA. On 1 April 1987, Julian Lennon appeared as The Baker in Mike Batt's musical The Hunting of the Snark (based on Lewis Carroll's poem). The all-star lineup included Roger Daltrey, Justin Hayward and Billy Connolly, with John Hurt as the Narrator. The performance, a musical benefit at London's Royal Albert Hall in aid of the deaf, was attended by Prince Andrew's then wife, the Duchess of York.

In 1991, George Harrison played on Lennon's album Help Yourself but was not directly credited. A song off the album, "Saltwater", reached number six in the UK and topped the Australian singles charts for four weeks. Also during this time he contributed a cover of the Rolling Stones' "Ruby Tuesday" to the soundtrack of the television series The Wonder Years. After 1991, Lennon left the music business for several years. He followed his interests in cooking, sailing, and sculpting during his leave from the music industry. After he began his performing career there was occasionally unfounded media speculation that Julian would undertake performances with Paul McCartney, George Harrison and Ringo Starr. However, in the Beatles Anthology series in 1996, the three surviving Beatles confirmed that there was never an idea of having Julian sit in for his father as part of a Beatles reunion, with McCartney saying "why would we want to subject him to all of this?"

In May 1998, Lennon released the album Photograph Smile to little commercial success. In 2002, he recorded a version of the Beatles' classic "When I'm Sixty-Four", a song from Sgt. Pepper's Lonely Hearts Club Band, for an Allstate Insurance commercial. In 2006 he ventured into Internet businesses, including MyStore.com with Todd Meagher and Bebo founder Michael Birch. In 2009 Lennon created a new partnership with Todd Meagher and Michael Birch called theRevolution, LLC. Through this company, Lennon released a tribute song and EP, "Lucy", honoring the memory of Lucy O'Donnell, the little girl who inspired the song "Lucy in the Sky with Diamonds", with 50% of the proceeds going to fund Lupus research. Lennon released a new album called Everything Changes on 3 October 2011.

Lennon's first-ever tour in early 1985 was documented as part of the film Stand By Me: A Portrait Of Julian Lennon — a film profile started by Sam Peckinpah, but completed by Martin Lewis after Peckinpah's death. Lennon has appeared in several other films including The Rolling Stones Rock and Roll Circus (1996, but shot in 1968), Cannes Man (1996), Imagine: John Lennon (1988), Chuck Berry: Hail! Hail! Rock 'n' Roll (1987) and a cameo in Leaving Las Vegas (1995) as a bartender. Julian provided the voice for the title role in the animated film David Copperfield. He was also the voice of the main character Toby the Teapot in the animated special The Real Story of I'm a Little Teapot (1990).

Julian Lennon is also the producer of the documentary called WhaleDreamers about an aboriginal tribe in Australia and its special relationship to whales. It also touches on many environmental issues. This film has received many awards and was shown at the 2007 Cannes Film Festival.

After photographing his half-brother Sean's music tour in 2007, Lennon took up a serious interest in photography.

On 17 September 2010, Lennon opened an exhibition of 35 photographs called "Timeless: The Photography of Julian Lennon" with help from long-time friend and fellow photographer Timothy White. Originally scheduled to run 17 September through 10 October, the Morrison Hotel Gallery extended it a week to end 17 October. The photographs include shots of his half-brother Sean, actress Kate Hudson, and U2 frontman Bono.

On 3 October 2010, CBS Sunday Morning aired an in-depth interview with Lennon that covered much of his life, including his relationship with his parents and sibling, his career, and his experience growing up as the son of one of the world's most famous celebrities.

Shortly after the death of his father, Lennon began collecting Beatles memorabilia. In 2010, he published a book of his collection, Beatles Memorabilia: The Julian Lennon Collection.

In 2009, Lennon founded The White Feather Foundation, whose mission "embraces environmental and humanitarian issues and in conjunction with partners from around the world helps to raise funds for the betterment of all life, and to honour those who have truly made a difference." Its name came from a conversation Lennon once had with his father. “Dad once said to me that should he pass away, if there was some way of letting me know he was going to be OK – that we were all going to be OK – the message would come to me in the form of a white feather. ... the white feather has always represented peace to me.”

Lennon has been quoted as having a "cordial" relationship with Ono while getting along very well with her son, his half-brother Sean, even spending time together on Sean's tour in 2007. In commemoration of John Lennon’s 70th birthday and as a statement for peace, 9 October 2010 saw Julian, alongside his mother Cynthia, unveil the John Lennon Peace Monument in his home town, Liverpool, England.

Lennon has been engaged twice, to socialite Lucy Bayliss and actress Olivia d'Abo. He resides in Lake Como in Italy.

In 2007 Lennon sold off a "significant" share of his stake in his father's catalogue of work, in exchange for an undisclosed sum, and the agreement that the purchasing company, Primary Wave, would market and promote his new material. The stake entitles Primary Wave to a portion of all royalties on the catalogue.

In November 2011, Julian felt snubbed by being excluded from some gala Fab Four occasions, and used his Facebook page to post his disappointment: "Wow... Snubbed at Macca’s wedding, snubbed at the anniversary of LOVE in Vegas! Snubbed at Macca’s wedding reception in NYC... Snubbed at George Harrison’s film premiere... What have I done to be ignored in such a way? I was not invited to ANY of these events... I thought we had a relationship ... Obviously not... Gimme some truth... Maybe now it’s time to tell the Truth... I & My Mother will NOT be eradicated from history... How dare they."