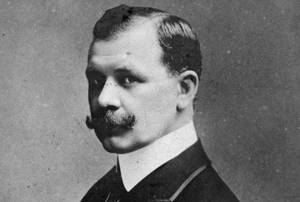 Franz Lehár (30 April 1870 – 24 October 1948) was an Austrian composer of Hungarian descent, mainly known for his operettas.

Lehár was born in Komárno (Hungarian: Komárom then in Austria-Hungary, now Slovakia) as the eldest son of a bandmaster in the Austro-Hungarian army. He studied violin and composition at the Prague Conservatory but was advised by Antonín Dvo?ák to focus on composing music. After graduation in 1899 he joined his father's band in Vienna, as assistant bandmaster. In 1902 he became conductor at the historic Vienna Theater an der Wien, where his first opera Wiener Frauen was performed in November of that year.

He is most famous for his operettas - the most successful of which is The Merry Widow (die lustige Witwe), but he also wrote sonatas, symphonic poems, marches, and a number of waltzes, (the most popular being Gold und Silber, composed for Princess Metternich's "Gold and Silver' Ball, January 1902) some of which were drawn from his famous operettas. Individual songs from some of the operettas have become standards, notably "Vilja" from The Merry Widow and "You Are My Heart's Delight" ("Dein ist mein ganzes Herz") from The Land of Smiles.

Lehár was also associated with the operatic tenor Richard Tauber, who sang in many of his operettas, beginning with Frasquita (1922), in which Lehár once again found a suitable post-war style. Between 1925 and 1934 he wrote six operettas specifically for Tauber's voice.

By 1935 he decided to form his own publishing house, Glocken-Verlag (“Publishing House of the Bells”), to maximize his personal control over performance rights to his works.

He died in 1948 in Bad Ischl, near Salzburg where he was also buried.

Honours
He was elected an honorary citizen of Sopron in 1940.
Despite his work being in contrast with the erudition of Wagner, associated with the Nazis, Lehár's work was enjoyed by Hitler, who awarded him the Goethe Medal. Lehár himself had a Jewish wife and his friend and sometime-librettist Fritz Löhner was killed in the gas chambers at Auschwitz.
A street in Leidsche Rijn, Utrecht, The Netherlands was named after him.

Recordings
In 1947, Lehár conducted the Zurich Tonhalle Orchestra in a series of 78-rpm recordings for English Decca (released in the U.S. by London Records) of overtures and waltzes from his operettas. The recordings had remarkable sound for their time because they were made using Decca's "full frequency range recording" process, one of the first commercial high fidelity techniques. These recordings were later issued on LP and CD. A compilation of his recordings has been released by Naxos Records.