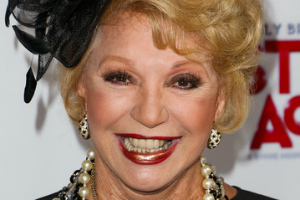 Ruta Lee (born May 30, 1936) is a Canadian actress and dancer who appeared as one of the brides in the film Seven Brides for Seven Brothers. She is remembered for her guest appearance in a 1963 episode of Rod Serling's The Twilight Zone and as a semi-regular on a number of game shows, including the Hollywood Squares, What's My Line?, and as Alex Trebek's co-host on High Rollers. She is of Lithuanian descent.

Ruta Lee was born Ruta Mary Kilmonis in Montreal, Quebec, and she was the only child of two Lithuanian immigrants. Her father was a tailor; her mother, a homemaker.

In 1948, her family moved to Los Angeles, California, where she graduated in 1954 from Hollywood High School and began studying acting and appearing in school plays. She attended both Los Angeles City College and the University of California at Los Angeles.

Lee worked as a cashier, an usherette, and a candy girl at Grauman's Chinese Theater, but when she was $40 short in her cash account at the end of her shift one night, she was fired.

Lee then got a break as a guest on two episodes of CBS's The George Burns and Gracie Allen Show. She soon found an agent, who landed her a job in an episode of the The Roy Rogers Show, followed by a spot in 1953 on the series Adventures of Superman. That same year, while acting in a small theater production of On the Town, she landed a role in the Academy Award-nominated musical Seven Brides for Seven Brothers. After Seven Brides, Lee appeared in several films including Anything Goes (1956), Funny Face, Witness for the Prosecution (1957), and Marjorie Morningstar (1958) with Natalie Wood. In 1962, Lee appeared in the comedy/western film Sergeants 3 along with Frank Sinatra, Dean Martin, Sammy Davis, Jr., and Peter Lawford.

In addition to films, Lee has appeared in many guest starring roles on television. For a number of years, she seemed to be everywhere on the screen. From 1957 to 1959, she was cast in different roles in eight episodes of the CBS crime drama television series, The Lineup. In 1959 and 1960, she was cast in four episodes of John Bromfield's syndicated crime drama, U.S. Marshal. Lee appeared as Ellen Barton in the 1960 episode "Grant of Land" of the ABC western series, The Rebel, starring Nick Adams. She also made five guest appearances on the CBS courtroom drama series Perry Mason between 1958 and 1965, including murderer Connie Cooper in "The Case of the Screaming Woman" (1958), and defendant Millie Crest in "The Case of the Foot-Loose Doll" (1959).

Lee also began appearing regularly on game shows such as Hollywood Squares, You Don't Say and Match Game. In the early 1970s, Lee continued to perform in both films and television roles on Love, American Style, The Mod Squad, and a role in the 1972 film The Doomsday Machine. By 1974, Lee grew frustrated by an increasing lack of roles, and took a job co-hosting the daytime game show High Rollers. She remained with the show until 1976.

During the 1980s, she lent her voice to episodes of The Flintstones Comedy Show and The Smurfs, in addition to guest roles on CHiPs, The Love Boat, and Charles in Charge. Lee also performed extensively in the mid 1980s on stage, including the title character in the musical Peter Pan. From 1988 to 1989, Lee had a recurring role on the CBS sitcom, Coming of Age. In 1989, she played the role of Sally Powers in the TV movie Sweet Bird of Youth with Elizabeth Taylor. In the 1990s, Lee continued to appear in episodic television, most notably in the series Roseanne. Lee appeared as the girlfriend of Bev Harris (Estelle Parsons) whose character disclosed she was gay.

In 2006, Lee received a star on the Hollywood Walk of Fame for her contributions to the television industry. In 1995, a Golden Palm Star on the Palm Springs Walk of Stars was dedicated to Lee.

In February 2008, Lee appeared as Clairee in a production of Steel Magnolias with Sally Struthers at the Casa Mañana theatre in Fort Worth, Texas. In October 2010, Lee played the role of Miss Mona in The Best Little Whorehouse in Texas, also at the Casa Mañana Theatre. She had previously played the role there in 1982. She appeared in 2012 in a small guest appearance on the long-running NBC soap opera Days of Our Lives.

In 1976, Lee married Texas restaurant executive Webster B. "Webb" Lowe, Jr. They divide their time between their homes in Hollywood, Palm Springs, Fort Worth and Mexico. She has no children.

In 1964, Lee called then-Soviet Premier Nikita Khrushchev, asking him to pardon her grandmother Ludvise Kamandulis, who had been in an internment camp in Siberia since World War II. The pardon was granted, and Lee's grandmother came to live with her in California in 1966. Kamandulis died two years later. Lee again rescued a relative from the former Soviet Union when she secured custody of her 18-year-old cousin, Maryte Kaseta, from Lithuania in 1987.

Lee has been involved with the charitable organization "The Thalians" for over fifty years. In addition to raising money and providing services for troubled youth and mental health organizations, Lee, who is also the board chairman, has co-produced the annual Ball of the Thalians with Debbie Reynolds throughout those five decades. In 2011, She stepped down after 55 years of involvement with the Thalians, and is now an emeritus member.