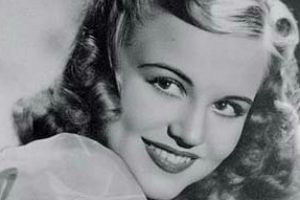 American singer, songwriter, arranger and recording artist. Well known and loved, she has appeared on more than 500 records and has played in numerous supper clubs. Also appearing in TV and movies, Lee received an Oscar nomination as Best Supporting Actress for "Pete Kelly's Blues" a 1955 jazz saga. Considered a jazz legend, she was dubbed "the Queen" by Duke Ellington. In 1970 she won a Grammy for "Is That All There Is?" Her other classic songs include "Manana," "Fever," "I'm a Woman" and "Where Can I Go Without You?" She is one of the few who have remained a salable artist for over four decades.

Peggy was four when her mother died. Her father, a railroad station-agent, began wandering and she was given over to the care of a stepmother who "poured boiling water on my hands when I did dishes and used the metal end of the razor strap for beatings."

After high school Lee escaped to Fargo, ND where she heard the new sounds on the radio: "race music" from Chicago. The radio program director at WDAY in Fargo auditioned her, changed her name to Peggy Lee and put her on "Hayloft Jamboree" as Freckle-Faced Gertie. After that she toured with bands, worked concessions at a California carnival and landed a job singing in a Palm Springs jazz club, The Doll House. Her career was launched by the tune Benny Goodman arranged for her "Why Don't You Do Right?" but fame almost faded when she married Goodman's handsome guitarist, Dave Barbour, in 1943. She turned down offers to sing in favor of domesticity until Barbour's self-destructive drinking strained the relationship, especially after their daughter Nicki was born.

Three husbands followed, two actors and a bandleader - all were short lived marriages. In 1965, 13 years after their divorce, she was about to get back together with Barbour who'd stayed sober since their break-up, but before it could happen he died of a heart attack. In the 1960s she became "Miss" Peggy Lee and enjoyed sellout appearances at New York's Basin Street East. In 1970 she was invited to perform at the White house for Richard Nixon and his guest, President and Mme. Pompidou of France.

Gifted with superb hearing and an excellent sense of pitch, she once stopped a band rehearsal because of an off-key cello note. "I'm in tune with the infinite," she told the musicians. "Figure out where that leaves you." Never without a dog-eared notebook recording details of 20-plus years of performances, she keeps track of every evening's program, the weather, her costume, even her nail polish color. "Perfection is no trifle," she says. Lee has done extensive behind-the-scene film work, including in 1952, writing the lyrics for the score of Walt Disney's "Lady and the Tramp."

She also did four of the voices, including that of the blond, slinky-hipped, beauty-marked dog named Peg. In 1991, she won a multimillion dollar suit against the Disney company in which she was rewarded the royalties she deserved from writing and performing the songs from "Lady and the Tramp." She had only been initially paid $3,500, whereas the sales were estimated at $90 million.

A near-fatal fall in a in New York hotel in 1976 left Lee temporarily blind, unable to stand and partially deaf. From the insight of the experience, Lee said, "I realized then that since I was five, I had been looking for something that seemed missing from my life. It was my mother."

With her sight returned, she began working on her autobiography for the stage. "I tried to do it as a book but it came out too Scandinavian, full of despair and gloom. Doing it with songs made it more positive, and that's the whole idea." The show folded after 13 previews and five performances.

A diabetic, Lee has been plagued for years by weight and glandular problems. In the late '60s a severe thyroid condition threatened to compress her vocal cords but improved without surgery. In 1961, when stricken with double pneumonia she claimed "it stopped my fear of death forever."

Her closest brush with death came in October 1985 when she underwent double-bypass heart surgery in New Orleans, followed by complications from infections. Two weeks later a second surgery was needed. She credits her recovery to the reading and meditating that she's done all her life.