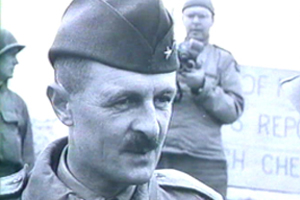 French military, served in Morocco and with valor in Europe and Africa during WW II; Marshal of France. Leclerc entered St. Cyr military academy in 1922 after which he was commissioned as a cavalry officer. Prior to WW II, he gained combat experience fighting tribal rebellions in Morocco. He began WWII as a captain in the 4th Division which saw its first action on 5/10/1940 when it moved into Belgium to counter the German advance. The division was one of several driven back to Lille and encircled by the Germans at the end of the month. Leclerc was granted permission to make his way through the enemy lines and joined an armored division under General Buisson.

He was seriously wounded on June 15 during a skirmish on the river Aube and was evacuated. He was successful in evading capture after the armistice and reached Paris on June 25 at which time he received the news of General DeGaulle’s call for resistance. He joined his wife and six children near Bordeaux for a brief visit before leaving for London on July 3 via Spain and Portugal. It is then that he adopted the name of Jacques Philippe LeClerc in order to protect his family from German or Vichy reprisals.

Upon reporting to DeGaulle he was immediately dispatched to Africa with a small group of officers whose task was to bring Equatorial Africa and Cameroon in the free French camp. The mission was a success and in November he was appointed military commander of Chad. In January 1941 his troops marched into the neighboring Italian colony of Libya. The campaign ended with the capture of the oasis of Koufra two months later. The Captain was promoted to Général de Brigade in August. LeClerc’s march from Chad to the Rhine began on 12/16/1942.

He quickly crushed the Italian defense in southern Libya and marched 1500 miles north reaching Tripoli on 1/23/1943 just as the British arrived from Egypt. LeClerc placed himself under the command of Field Marshal Montgomery and his corps played a major role in the advance of the 8th Army on Tunisia. He was promoted to General de Division on 5/05/1943 and ordered to Morocco to form the 2nd Armoured Division.

The division was assigned to Patton’s American 3rd Army and landed in Normandy on 8/01/1944. News reaching Allied headquarters of the Paris insurrection and General von Choltitz’s orders from Hitler to destroy the city in advance of a withdrawal precipitated a political crisis in the Allied camp. Finally after meetings between DeGaulle and Eisenhower, LeClerc was given a command to proceed with the liberation of Paris. The division began its 100 mile drive towards the city on August 23rd. In the evening of the next day gap was found in the German lines and at 9:22 p.m. Captain Raymond Dionne’s tank, "Romilly" and two other Shermans pulled up in front of the Paris City Hall. The main body of the 2nd division entered the city the next morning and that afternoon LeClerc accepted General von Choltitz surrender. The division was later given the honor of being the first unit to enter Strasbourg on 11/23/1944 keeping a promise many of its men had first made at Koufra three years and thousands of miles before.

The 2nd finished the war in an advance on Berchtesgaden that ended 5/04/1945. LeClerc left France on 8/18/1945 as Commander in Chief of French Forces in the Far East but by the time he reached Indochina his only action was to accept the Japanese surrender. LeClerc was killed in a plane crash at Colomb-Bechar, Algeria on 11/28/1947. He was made Marshal of France, posthumously, on 8/23/1952.