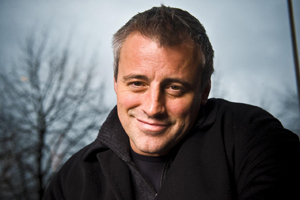 LeBlanc graduated from Newton North High School in 1985. After high school he attended college at Wentworth Institute of Technology in Boston, MA. He left a while after starting his second semester. His father is Paul LeBlanc, and his mother, Pat Grossman. He is of mixed Irish, Dutch, English, and Acadian descent on his father's side, and of partly Italian ancestry on his mother's. LeBlanc's Acadian ancestors may have come to Massachusetts after the Acadian deportation in the mid-1700s. He has one younger half-brother, Justin LeBlanc. The name LeBlanc is French for White; as in many Latin-based languages, the Le (definite article The) in LeBlanc is for formal use and is usually ignored when translated. Therefore, for direct translation into English, his last name is White. LeBlanc can speak French (and ironically in one of the episodes of Friends in Season 10, 'The One where Joey Speaks French', his character Joey auditions for a part in which he is required to speak French but cannot do so).

In the late 1980s, Le Blanc began appearing in a number of television ads, including well-known spots for Heinz, Levi's and Coca-Cola. In 1988, he landed his first regular TV role, on the drama TV 101 which ran for one season. In 1991 he starred in the music video for Alanis Morissette's single "Walk Away", where he played her boyfriend. The video even featured a spoken dialogue scene between LeBlanc and Morisette at the end. In 1992, he went on to star in a spin-off of Married With Children entitled Top of the Heap. The short lived series only lasting 7 episodes in April and May of 1991. He would also play his Top of the Heap character Vinnie Verducci in a number of Married With Children episodes.

Le Blanc finally made it big when he landed the role of Joey Tribbiani in 1994 and would go on to play him for ten years, over ten seasons of Friends and two seasons of Joey

On May 3, 2003, LeBlanc married long-time girlfriend Melissa McKnight and the couple had one daughter, Marina Pearl LeBlanc, who was born February 8, 2004.

In August 2005, LeBlanc publicly apologized to his wife and the public for having inappropriate contact with a stripper during a vacation in British Columbia. The couple separated on January 1, 2006, and in March of that year, LeBlanc filed for divorce, citing irreconcilable differences, their divorce became final on October 6, 2006. According to Entertainment Tonight, LeBlanc has been dating co-star of "Joey" Andrea Anders.