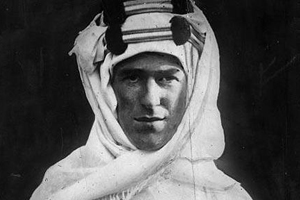 Welsh soldier of fortune, adventurer, writer and archaeologist. After the press of his day documented his diplomatic and military genius as one of the organizers of the Arab Revolution against Turkey of WW I, Lawrence became a national romantic hero. A scholar of medieval military architecture, Lawrence wrote many works such as "The Seven Pillars of Wisdom," 1926, "Revolt in the Desert," 1927, "Crusader Castles," 1936 and "Oriental Assembly" in 1929.

Lawrence was the second son of four boys. His father, Sir Thomas Robert Chapman left his wife for Tom's mother, the family governess, Sarah Maden. Traveling around the UK, his dad changed their name to Lawrence but failed to secure a divorce from his wife. Lawrence was informed of the nature of his parents unlawful relationship when he was ten years old. Lawrence studied at Oxford University. In 1908, at 19 he went on a 2,000-mile bike tour of France in order to examine the castles and fortifications. In 1911, he worked as the junior member of the British Museum archaeological team at Carchemish, on the Euphrates until 1914.

Lawrence worked for army intelligence in North Africa at the start of WW I and from 1916-1918 he lived as the Arabs, riding on a camel in the desert. In 1916, he helped lead the Arabs against the Turkish Empire. In November 1917 he was held prisoner by the Turks and subjected to whippings and homosexual assaults. After he was freed, he went on to join the Arabs in Damascus, October 1918. The following year, Lawrence failed to negotiate Arab independence from British and French domination at the Paris Peace Conference. In 1921-'22, he used his knowledge of Arab affairs for the benefits of the British Colonial Office.

When his fame reached its peak in 1922, Lawrence withdrew from public attention. He changed his name to John Hume Ross and joined the Royal Air Force as an aircraftman. In 1923, he called himself T.E. Shaw and joined the Royal Tank Corps in Dorset, England. By 1925, he transferred back to the RAF as a private. He was discharged from the RAF in 1935.