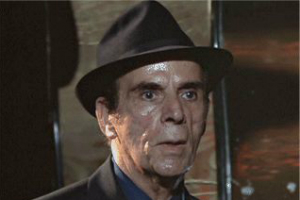 Marc Lawrence (December 17, 1909 – November 28, 2005) was an American character actor who specialized in underworld types. He has also been credited as F. A. Foss, Marc Laurence and Marc C. Lawrence.

Lawrence was born as Max Goldsmith in New York City, the son of a Polish Jewish mother, Minerva Norma (née Sugarman), and a Russian Jewish father, Israel Simon Goldsmith. He participated in plays in school, then attended the City College of New York. He married Odessa-born novelist and screenwriter Fanya Foss, with whom he had two children; she died on December 12, 1995. Lawrence died of heart failure on November 28, 2005 at the age of 95. He was buried at Westwood Memorial Park in Westwood, California. His son, Michael Lawrence, is a writer and artist based on the Greek island of Hydra, whose book, My Voyage In Art, details his meetings with various of his father's actor friends; while at UCLA he befriended the singer-songwriter James Douglas "Jim" Morrison. His daughter, actress Toni Lawrence, was once married to actor Billy Bob Thornton and starred in his film Daddy's Girl.

In 1930, Lawrence befriended another young actor, John Garfield. The two appeared in a number of plays before Lawrence was given a film contract with Columbia Pictures. Lawrence appeared in films beginning in 1931. Garfield followed, starting his film career in 1938. Lawrence's pock-marked complexion, brooding appearance and New York street-guy accent made him a natural for heavies, and he played scores of gangsters and mob bosses over the next six decades. Later, Lawrence found himself under scrutiny for his political leanings. When called before the House Un-American Activities Committee, he admitted he had once been a member of the Communist Party. He was blacklisted and departed for Europe, where he continued to make films. Following the demise of the blacklist, he returned to America and resumed his position as a familiar and talented purveyor of gangland types. He played gangsters in two James Bond movies: 1971's Diamonds Are Forever opposite Sean Connery, and 1974's The Man with the Golden Gun opposite Roger Moore. He also portrayed a henchman opposite Laurence Olivier in Marathon Man (1976) and a stereotypical Miami mob boss alongside Jerry Reed and Dom DeLuise in the comedy Hot Stuff (1979).

In 1991 Lawrence's autobiography was published entitled Long Time No See: Confessions of a Hollywood Gangster. Lawrence was also the subject of a novel, The Beautiful and the Profane.

His final film role was in Looney Tunes Back in Action, appearing as an Acme Corporation vice president.