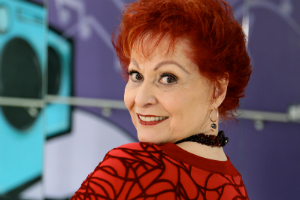 Carol Lawrence (born September 5, 1932) is an American actress, most often associated with musical theatre, but who has also appeared extensively on television.

Born as Carol Maria Laraia in Melrose Park, Illinois. Carol Lawrence made her Broadway debut in 1952. She achieved success in the role of Maria in the original Broadway production of West Side Story in 1957, and received a nomination for Tony Award for Best Featured Actress in a Musical for this role. She played the role for two years, and after an appearance in the short-lived show Saratoga, she returned to West Side Story for its 1960 season. Among her other Broadway successes were I Do! I Do! (1967) and Kiss of the Spider Woman (1993–95).

She played several roles at The Muny in St. Louis, the oldest and largest outdoor theater in the U.S., including Fanny Brice in Funny Girl (1975), Charity in Sweet Charity (1977), and Lucille Early in No, No, Nanette (1990). Among her other musical theatre parts are the title role in Mame, Guenevere in Camelot (opposite husband Robert Goulet), Do I Hear a Waltz at the Pasadena Playhouse (2001) and Follies at the Wadsworth Theatre in Los Angeles in 2002.

Her television performances include guest roles in Breaking Point (as Evelyn Denner in the 1963 episode entitled "There Are the Hip, and There Are the Square"), Rawhide, Combat!, Wagon Train, The Fugitive, Hawaii 5-0, Marcus Welby, M.D., Medical Center, Kung Fu, Mannix, Murder She Wrote, Saved by the Bell, and Sex and the City.

In 1992-93, she played the role of matriarch Angela Eckart on General Hospital. She hosted five shows of Chef du Jour for the Food Network, cooking from her own cookbook, I Remember Pasta, and setting a record for cookbook sales on the Home Shopping Network.

In 1998,She appeared in the remake of Jason Miller's That Championship Season in a cameo role as Vincent D'Nofrio's mother-in-law, a role written into the film specifically for her.

Lawrence was awarded the Harvard Hasty Pudding Woman of the Year Award in 1960.

She has a star on the Hollywood Walk of Fame.

Lawrence has been married and divorced three times. Her longest union was with actor and singer Robert Goulet (from 1963 until 1981); together they had two children, Christopher and Michael.