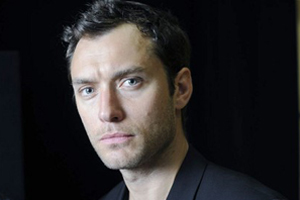 Early life
Jude Law was born in Lewisham, South London, as second child to teachers Maggie and Peter Law. He grew up in Blackheath, a village in the Borough of Lewisham and he was educated at John Ball Primary School in Blackheath and Kidbrooke School in Kidbrooke, before attending the Alleyn's School in Dulwich.

1980s-1990s
In 1987 Law began acting with National Youth Music Theatre. He played various roles in the Edinburgh Fringe-awarded play The Ragged Child. One of his first major stage roles was Foxtrot Darling in Philip Ridley's multi-award-winning The Fastest Clock In The Universe. Law went on to appear as Michael in the West End production of Jean Cocteau's tragicomedy Les parents terribles, directed by Sean Mathias. For this play he was nominated for an Laurence Olivier Award for Outstanding Newcomer, and he received the Ian Charleson Award for Outstanding Newcomer.

Following a title change to Indiscretions, the play was reworked and transferred to Broadway in 1995, where Law acted opposite Kathleen Turner, Roger Rees and Cynthia Nixon. This role earned him a Tony Award nomination and the Theatre World Award. In 1989, Law got his first TV role in a movie based on the Beatrix Potter children's book, The Tailor of Gloucester. After minor roles in British television, including a two-year stint in the Granada TV soap opera Families and the leading role in the BFI /Channel 4 short The Crane, Law had his breakthrough with the British crime drama Shopping, which also featured his future wife Sadie Frost.

In 1997, he became more widely known with his role in the Oscar Wilde biopic Wilde. Law won the "Most Promising Newcomer" award from the Evening Standard British Film Awards, for his role as Lord Alfred "Bosie" Douglas, the glamorous lover of Stephen Fry's Oscar Wilde. In Andrew Niccol's science fiction film Gattaca he played the role of a disabled former swimming star living in a eugenics-obsessed dystopia. In Clint Eastwood's Midnight in the Garden of Good and Evil he played the role of the ill-fated hustler murdered by an art dealer, played by Kevin Spacey. He also played a mob hitman in Sam Mendes's 1930s period drama Road to Perdition.

2000s
Law is on the Top Ten List from the 2006 A-list of the most bankable movie stars in Hollywood, following the criteria of James Ulmer in the Ulmer Scale. On 1 March 2007, he was honoured with the Ordre des Arts et des Lettres conferred by the French government, in recognition of his contribution to World Cinema Arts. He was named a Chevalier des Arts et des Lettres. He has been nominated for an Academy Award twice; once as Best Supporting Actor for his performance in The Talented Mr. Ripley in 1999, and then again as Best Actor in a Leading Role for Cold Mountain in 2003, both directed by Anthony Minghella.

For The Talented Mr. Ripley he learned to play saxophone and earned a MTV Movie Award nomination together with Matt Damon and Fiorello for performing the song Tu Vuo' Fa L'Americano by Renato Carosone and Nicola Salerno. He learned ballet dancing for the film Artificial Intelligence: AI (2001).

Law, an admirer of Sir Laurence Olivier, used the famous actor's image in the 2004 film Sky Captain and the World of Tomorrow. Using computer graphics, footage of the young Olivier was merged into the film, playing Dr.Totenkopf, a mysterious scientific genius and supervillain.

Law is one of three actors taking the place of the actor Heath Ledger in Terry Gilliam's film The Imaginarium of Doctor Parnassus. Along with Law, actors Johnny Depp and Colin Farrell will portray the "three separate dimensions in the film." He will appear opposite Forest Whitaker in the dark sci-fi comedy Repossession Mambo and he'll star as Dr. Watson in Guy Ritchie's upcoming adaption of Sherlock Holmes, alongside Robert Downey Jr and Rachel McAdams.

Law stars as a celebrity supermodel in the new movie Rage.

In May 2009, he will return to the London stage to portray Prince Hamlet in Shakespeare's play Hamlet at the Donmar Warehouse. He will be joined by Ron Cook, Peter Eyre, Gwilym Lee, John MacMillan, Kevin R McNally, Gugu Mbatha-Raw, Matt Ryan, Alex Waldmann and Penelope Wilton.

Advertising
Law is the face of the new male perfume of Dior, Dior Homme Sport.

Since 2005, he has represented Dunhill as an "apparel ambassador" in Asia. In 2008, he became the international face of Dunhill and appears in the worldwide advertising campaigns.

Realtime Movie
In spring 2007 Jude Law shot the Jason Martin-directed short film Realtime Movie Trailer at Borough Market, South London. Instead of promoting a film, this "trailer" which appeared amongst regular trailers in selected cinemas across London starting 19 November 2007, advertised a live event, Realtime Movie, by Polish artist Pawel Althamer. Hundreds turned up for this – unfilmed – re-enactment in real time of the sequence of events shown in Realtime Movie Trailer by the same actors, including Jude Law and Althamer as a Polish laborer, held at Borough Market on 30 November 2007. The performance was commissioned by Tate Modern as part of its The World as a Stage exhibition which explored the boundaries between arts and reality.

Charity activities
In 2004, Law launched a campaign to raise £2.5 million towards the Young Vic Theatre's £12.5 million redevelopment project. He is currently Chair of the Young Vic committee and has said that he is proud to help make the Young Vic "a nurturing bed" for young directors. He is an enthusiastic football fan and a supporter of the English football club Tottenham Hotspur. In 2006, he joined Robbie Williams in the "Soccer Aid" celebrity football match to benefit UNICEF.

In 2006, he starred in an anthology of Samuel Beckett readings and performances directed by Oscar-winning director Anthony Minghella. With the Beckett Gala Evening at the Reading Town Hall more than £22,000 was donated for the Macmillan Cancer Support. Also in 2006, Frost and Law directed a Shakespeare play in a South African orphanage. He travelled to Durban, South Africa, with Frost and their children in order to help children who have lost their parents to AIDS. In July 2007, as patron of the charity, he helped kick off the month-long tour of the AIDS-themed musical Thula Sizwe, by The Young Zulu Warriors. Also in 2007, he encouraged the Friends of the Earth / The Big Ask campaign, asking British Government to take action against Climate change.

Law also does charity work for organizations such as Make Poverty History, the Rhys Daniels Trust, and the WAVE Trauma Centre. He supports the charity Make-A-Wish Foundation and the Pride of Britain Awards. He is the chair of the Music For Tomorrow Foundation, to help rebuild Katrina-devastated New Orleans.

Jude Law is an ambassador of HRH The Prince of Wales' Children & the Arts Foundation.

Stars including Judi Dench and Jude Law have helped save St Stephen's Church in Hampstead. The celebrities supported the campaign, which raised £4.5 million to refurbish the Victorian church in north London. The building reopened in March 2009 as an arts and community centre.

Peace activities
In July 2007, Jude Law and Jeremy Gilley were in Afghanistan over a period of 10 days to document peace commitments and activities there for an upcoming film and for marking the UN International Day of Peace. Accompanied by UNICEF Representative Catherine Mbengue, they travelled and filmed in treacherous areas of eastern Afghanistan with a film crew, interviewing children, government ministers, community leaders and UN officials. They also filmed at schools and visited various UNICEF-supported programmes inside and outside the capital Kabul. The efforts of Peace One Day are coordinated in celebration of the annual International Day of Peace, on 21 September. The film named The Day After Peace premiered at the Cannes Film Festival. On 21 September 2008, the film was shown at a Gala screening at the Royal Albert Hall.

On 30 August 2008, Law and Gilley returned to Afghanistan to help keep a momentum around Peace Day. They met President Hamid Karzai, top NATO and U.N. officials, and members of the aid community. They also screened the new documentary about the efforts in support of peace. The documentary features activities that took place throughout Afghanistan in 2007. It also highlights support from UNICEF and the WHO for the peaceful immunization of 1.4 million children against polio in insecure areas.

Personal life
Law's parents live in France, where they run their own drama school and theatre. His sister Natasha is a well-regarded illustrator and artist, living in London.