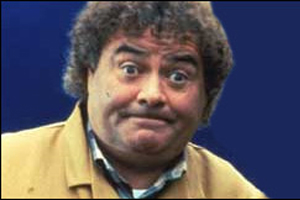 He is best known as a part of the double act Little and Large, with Syd Little. He was raised in Manchester, to where he moved with his family at an early age.

He is a long time supporter of Manchester City. Little and Large began their career on the TV talent show Opportunity Knocks winning in 1971 and went on to star in many television comedy programmes, including their own series called The Little and Large Show, becoming popular as pantomime stars.

Large was generally regarded as being the "funny" half of the duo, and also did impersonations.

After being in hospital in March 2002 with kidney trouble, he underwent a heart transplant at Papworth Hospital, Cambridge in 2003. He is now fully recovered and continues to work on the after dinner circuit, and has started performing some cameo acting roles in dramas such as The Brief and Blackpool. Large's autobiography Larger than Life has also been published.

In 2006 he appeared on a comedy edition of The Weakest Link but was eliminated prior to the penultimate round.

Eddie Large lives in Portishead, near Bristol, with his wife Patsy and 26-year-old son. He also has two daughters and three grandchildren.

In an interview in 2010, Large revealed that he and Syd Little have not spoken to each other for several years