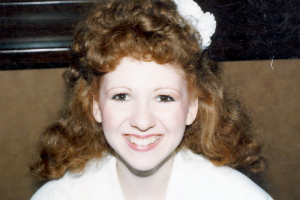 Bonita Melody Lysette \"Bonnie\" Langford (born 22 July 1964) is an English actress, dancer and entertainer. She came to prominence as a child star in the early 1970s then she subsequently became Mel Bush a companion of Colin Baker and Sylvester McCoy\'s Doctor in the BBC series Doctor Who, and has appeared on stage in various musicals such as Peter Pan: The Musical, Cats, The Pirates of Penzance and Chicago. She is the aunt of actresses Summer, Scarlett, Zizi and Saskia (Sasi) Strallen.

Early career and Doctor Who

Bonnie Langford attended the Arts Educational School St Catherine\'s School, Twickenham and the Italia Conti Academy stage school. Her first stage appearance was at four months, and her first public appearance was at 15 months when she danced in specially-made ballet shoes. She first came to public attention when, aged six years old, she won the talent show Opportunity Knocks. This led to early fame in the television series Just William, the 1974 Broadway revival of Gypsy starring Angela Lansbury, the 1976 film Bugsy Malone, and the 1977 film Wombling Free. During this time, she was appearing as a regular on a children\'s prime-time show made by Yorkshire Television called Junior Showtime, along with child stars Lena Zavaroni, Neil Reed and Glynn Poole among others.

Between 1986 and 1987, Langford played the role of Mel, companion to both the sixth and seventh Doctors in the classic science fiction series Doctor Who. She returned to the role in 1993 for Dimensions in Time, a special charity Doctor Who/EastEnders crossover episode as part of the BBC\'s Children in Need. She has continued to reprise the role in several audio dramas produced by Big Finish Productions alongside the Colin Baker and Sylvester McCoy Doctors (including as an alternative version of Mel with Michael Jayston as the Valeyard in the Doctor Who Unbound play He Jests at Scars...).

Bonnie was a featured dancer in BBC One\'s popular light entertainment series The Hot Shoe Show which she co-presented with Wayne Sleep. On 23 October 2005, she performed in Children Will Listen, a 75th birthday tribute to Stephen Sondheim at the Theatre Royal, Drury Lane. She is also a panto regular; recent credits include Prince Charming in Cinderella at the Yvonne Arnaud Theatre, Guildford (2005/2006); Peter in Peter Pan at the Richmond Theatre in Surrey (2008/2009); and Fairy Fuchsia in Jack & the Beanstalk at the Yvonne Arnaud Theatre in Guildford (2011–2012).

Dancing on Ice show and tour

In 2006, Bonnie was a celebrity contestant in the first series of ITV\'s Dancing on Ice, partnering professional figure skater Matt Evers. Their routines were characterised by the dramatic lifts and tricks they performed and were amongst the most ambitious in the competitions. Viewers saw her bang her head as she was spun on the ice during rehearsals, illustrating the danger of some of the moves they were attempting. Their appearances were also notable for the differing reception they received from the panel of judges (which consistently voted them highly, awarding them the highest total scores and the only two maximum scores from individual judges) and the voting public (who twice placed them in the bottom two pairs, forcing a \"skate off\" to remain in the competition). They finished in third place overall.

Langford and Evers appeared again on the programme in the one-off Champion of Champions show which followed series two. They were scored second overall by the judging panel but again the public vote was less favourable and they were amongst the four teams eliminated in the first round of the competition. Langford then toured with Torvill and Dean\'s Dancing on Ice: The Tour in 2007, a series of 41 shows in which she was the winner 27 times.

Bonnie Langford took part in the Dancing on Ice: The Tour in April and May 2008. Teamed with new skating partner Pavel Aubrecht she again impressed the judges and fans with two new superb routines, however the competition was extremely high with four of the other celebrities also winning shows as well and in the end Bonnie won 4 of the 49 shows on the tour. Her record of 27 wins set on the 2007 tour was broken on the 2009 tour by Ray Quinn who scored 35/39.

Since Dancing on Ice

Langford\'s appearance on Dancing on Ice sparked a regeneration in her career. She returned to the West End theatre in April 2006 (for the first time since 1998) playing the murderess Roxie Hart in the long-running West End musical Chicago and again in December 2007 – February 2008 in the same role, also in 2006–07 she appeared in the Birmingham and Plymouth tours of Guys and Dolls playing Miss Adelaide Adams, a dance hall hostess. Starting in 2006 she has also been touring with Sandi Toksvig in a two-woman theatrical show called Short and Curly.

She has also made a number of guest appearances on television, including Agatha Christie\'s Marple on ITV (playing Betty Johnson alongside Brian Conley in the episode By the Pricking of My Thumbs, February 2006), The Catherine Tate Show (late 2006), Supermarket Sweep with Dale Winton (February 2007) and the children\'s programme Hider in the House (March 2007).

In July 2007 she was a judge on the ITV series Baby Ballroom: The Championship. Starting on 16 February 2008, Bonnie was 1 of 5 celebrities making up team Ant for their new team game Ant versus Dec in Ant & Dec\'s Saturday Night Takeaway. She survived right up until the final edition, reaching the semi final stage & just missing out on the final which was eventually won by team Dec.

From summer 2009 Bonnie again appeared in Chicago as Roxie Hart in Canada and also on Broadway in New York City from September – November 2009 (Bonnie returning to Broadway for the first time in 35 years) & again at the Cambridge Theatre in London\'s West End in December 2009 – January 2010.

Bonnie performed at the famous Birdland (jazz club) in New York in February 2010 & in spring & summer 2010 she toured America once again in Chicago.

She has just finished recording a \'Talking Book\' audio of her Doctor Who television adventure Paradise Towers released in April 2012 by AudioGO.

She displays her many talents in the role of Roz in the first UK tour production of the Broadway musical, 9 to 5 which was launched at the Opera House, Manchester on 12 October 2012.

Bonnie Langford has supported the BBC\'s Children in Need appeal (1983 and 1987) and Comic Relief appeal (2007). During her 1987 Children in Need appearance, she had her ears pierced for the first time live on air after some of her friends had promised to make a large donation if she did so. For the latter, she appeared in the video for the charity single I\'m Gonna Be (500 Miles) by the Proclaimers, Peter Kay and Matt Lucas.

She has also appeared in celebrity versions of game shows to support Childline when she played in Who Wants to Be a Millionaire? alongside Anton Du Beke in December 2006, and the CdLs Foundation on both The Weakest Link in January 2007 (which she won) and Who Wants to Be a Millionaire?, this time alongside Jason Gardiner, in January 2008. After a brief hiatus she has returned to screen and stage following her acclaimed performances on celebrity talent show Dancing on Ice. In 2009, Langford moved to the United States, and now divides her time between New York City and Britain. She lives with her husband, fellow actor Paul Grunert (ChuckleVision), whom she married in Mauritius in 1995, along with their two daughters, the elder of whom is Grunert\'s child from his previous marriage. The younger daughter, Biana was born in October 2000.

Bonnie Langford, alongside Kerry Ellis, is the patron for Performance Preparation Academy in Guildford.