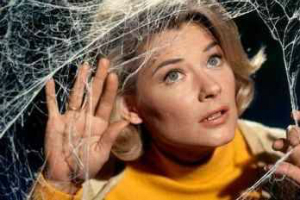 Lange was born into a theatrical family in Redding, Connecticut. Her father, John George Lange (1885–1942), was a cellist and the music arranger for Florenz Ziegfeld and conductor for Henry Cohen; her mother, Minette (née Buddecke) (1898–1970), was an actress. They had three daughters, Minelda (1922–2004), Joy, (1927–2007), and Hope, and a son, David. John worked in New York City and the family moved to Greenwich Village when Hope was a young child.

Lange sang with other children in the play Life, Laughter and Tears, which opened at the Booth Theatre in March 1942. At age 9, Lange had a speaking part in the award-winning Broadway play The Patriots, which opened in January 1943.

John Lange died in September 1942 but the family stayed in New York City. Minette ran a restaurant on Macdougal Street near Washington Square Park from 1944 to 1956. The name was "Minette's of Washington Square", although some sources confuse it with "Minetta Tavern", an Italian restaurant on Macdougal Street founded in 1937. The entire family worked in the restaurant; the oldest daughter, Minelda, ran the cash register while Joy and Hope waited on tables.

While attending high school; Lange studied dance, modeled, and worked in the family restaurant. She sometimes walked the dog of former First Lady Eleanor Roosevelt, who had a nearby apartment. When her photo appeared in the newspaper, she received an offer to work as a New York City advertising model. She appeared on the June 1949 cover of Radio-Electronics magazine wearing the "Man from Mars" Radio Hat. This portable radio built into a pith helmet was a sensation in 1949.

Lange attended college for two years at Reed College in Oregon and at Barmore Junior College in New York. She met her first husband, Don Murray, at Barmore.

She began working in television in the 1950s with appearances on Kraft Television Theatre, which caught the eye of a Hollywood producer. Lange came to prominence in her first film role in Bus Stop with Marilyn Monroe and Don Murray, whom she married on April 14, 1956. Murray later said that Monroe grew jealous of another blonde being hired for the movie and asked the studio producers to dye Lange's blonde hair light brown.

As a result of favorable reviews, Lange landed a major role in the then-risqué 1957 film Peyton Place. Her strong performance earned her a nomination for a Golden Globe Award and another for the Academy Award for Best Supporting Actress. She would become a rather well-recognized supporting actress of ingénue roles. Lange later said that she became somewhat typecast in her ingénue film appearances and this is why her movie career was short-lived.

She went on to appear in Nicholas Ray's 1957 film, The True Story of Jesse James as James' wife, opposite Robert Wagner. She appeared in The Young Lions alongside Montgomery Clift. She starred as the wife of Jeffrey Hunter's character in Anton Myrer's wartime drama In Love and War in 1958. These roles eventually led to Lange earning top billing in 1959's The Best of Everything, with Suzy Parker and Joan Crawford.

Lange appeared as Elvis Presley's older psychologist love interest in Wild in the Country in 1961, despite being only 13 months Elvis' senior. She then appeared in Frank Capra's final movie, Pocketful of Miracles, alongside Glenn Ford. The next year, she appeared with Ford again in the romantic comedy Love Is a Ball.

Lange returned to television for a 1966 role in the series The Fugitive (1963). She starred from 1968 to 1970 in the popular television series, The Ghost & Mrs. Muir for which she earned two Emmy Awards and a Golden Globe Award nomination. This success was followed by three seasons on The New Dick Van Dyke Show as Dick Van Dyke's wife, Jenny Preston, from 1971 to 1974, declining to return for a fourth season of the show. She also appeared in twelve television movies. In 1977, she returned to the Broadway stage where her acting career had originally begun. She also played the wife of Charles Bronson in the original Death Wish film. In 1985, she appeared in A Nightmare on Elm Street 2: Freddy's Revenge and in 1986, she took a role as Laura Dern's mother in David Lynch's Blue Velvet. She took a Broadway role in Same Time, Next Year and then made appearances in the television movie based on Danielle Steel's Message from Nam and in 1994's Clear and Present Danger.

Lange made appearances in the Maine town in which Peyton Place had been filmed during the film's 40th anniversary celebrations in 1998.

Lange's year of birth is often reported as 1931, but the correct year is 1933. A possible source of this error is the Reader's Digest Almanac and Yearbook. It has shown the 1931 date from as early as 1980 to the 2009 issue. The 1976 and earlier editions give the year of birth as 1933. Other references such as Chase's Annual Events have always shown 1933, as does her Social Security Death Index entry.

The 1933 year also matches the ages given in newspaper accounts of Lange in her youth. The New York Times covered the annual "Young People's Concert" awards given at Carnegie Hall. Lange received an award in April 1945 and again in April 1946, when her age was given as 12. Lange's age of 12 in April 1946 would correspond to a birthdate in November 1933, not 1931.

Also, a short feature story was published in February 1951 about Hope Lange's culinary skills. The first paragraph gives the biography of a seventeen-year-old Hope Lange of Greenwich Village, New York. Her late father was "director of music for Florenz Ziegfield" and her mother had a catering business. In addition to modeling, acting, and dancing; Hope could make "terrific" sandwiches. The article gives her recipes for "Sardine Strips" and "Cheese Ribbon" sandwiches. Born in 1933, Lange would have been 17 years old in February 1951.

Lange's first marriage was to actor Don Murray in 1956; they had two children, actor Christopher Murray and photographer Patricia Murray. Lange left Don Murray in 1961 for actor Glenn Ford, associate producer and co-star of Pocketful of Miracles. She and Ford never married. She then left acting for three years after her October 19, 1963, marriage to producer-director, Alan J. Pakula, whom she divorced in 1971.

In 1972 she also dated Frank Sinatra and began a relationship with married novelist John Cheever. In 1986, she married theatrical producer Charles Hollerith, with whom she remained the rest of her life.

Lange died on December 19, 2003, at St. John's Hospital in Santa Monica, California, as a result of an ischemic colitis infection at the age of 70.