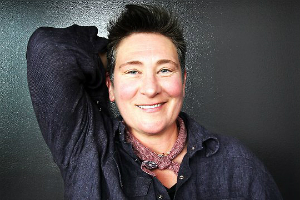 Canadian singer and songwriter, accomplishing the music-crossover from traditional country to pop market and achieving a Grammy award for her album "Shadowland." She is known for her lower-case name that was initialized in 1983, always showing individuality and an eccentric style. Lang won rave reviews with her androgynous country singing from 1984 with the validation of three major Grammy nominations in 1990 alone.

Lang was the youngest of four kids born to a teacher and a pharmacist in tiny Consort, Alberta, a town of 650. When she was 12, her dad up and left, never to be seen again. She had been singing and tap dancing since she was five and eccentricity came naturally.

In the 6th grade, she used snuff and wore leather bell-bottoms. After graduating from Red Deer College, she joined a group of performance artists who took themselves very seriously. In 1982 a play about Patsy Cline led Lang to country music and an ongoing obsession. It clicked and all came together.

She writes barroom lyrics, wears men's wide-shouldered suits or down home country dresses with boots. With her first film "Salmonberries" in 1991, the question of her sexual preference came up, as it had before, and she announced her homosexuality the following year, coming out in the 6/16/1992 issue of The Advocate.

She's a vegetarian, teetotaler, androgyny, feminist Canadian, stridently unlike others and reveling in being "odd one out."

The year 2000 finds her as the opening act for Sting during their concert tour. She starts her own solo concert tour on 8/09/2000 to promote her new CD, "Invincible Summer," some of the songs penned while she was enjoying the beaches of southern California after her move from Canada.