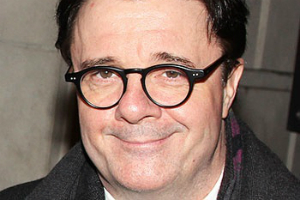 Nathan Lane (born February 3, 1956) is a two-time Tony Award-winning American actor of stage, screen, and television. He is best known for his roles as Mendy in The Lisbon Traviata, Albert in The Birdcage, Max Bialystock in the musical The Producers, Ernie Smuntz in MouseHunt, Nathan Detroit in Guys and Dolls, Pseudolus in A Funny Thing Happened on the Way to the Forum, and his voice work in The Lion King and Stuart Little. In 2006, he received a star on the Hollywood Walk of Fame, and in 2008 he was inducted into the American Theatre Hall of Fame.

Lane was born Joseph Lane in Jersey City, New Jersey, the son of Irish American Catholic parents. He was named after his uncle, a Jesuit priest. His father, Daniel, was a truck driver and an aspiring tenor who died from alcoholism when Lane was eleven; his mother, Nora, was a housewife and secretary who suffered from manic-depression, and died in 2000. He has two brothers, Robert and Daniel. Lane attended Roman Catholic schools in Jersey City, including Jesuit-run St. Peter's Preparatory High School, where he was voted Best Actor, and years later received the 2011 Prep Hall of Fame Professional Achievement Award.

Accepted to St. Joseph's College in Philadelphia on a drama scholarship, he was accompanied on what was supposed to be his first day there by his older brother Dan. Discovering that the scholarship wouldn't cover enough of his expenses, he decided to leave, and work for a year to earn some money. "I remember him saying to me, 'College is for people who don't know what they want to do,'" Dan Lane said. Because there already was a Joseph Lane registered with Actors Equity, he changed his name to Nathan after the character Nathan Detroit from the musical Guys and Dolls. He moved to New York City where, after a long struggle, his career began to take off, first with some brief success in the world of stand-up comedy with partner, Patrick Stack, and later with Off-Broadway productions at Second Stage Theatre, the Roundabout Theatre, the Manhattan Theatre Club, and his 1982 Broadway debut in a revival of Noël Coward's Present Laughter as Roland Maule (Drama Desk nomination) with George C. Scott, Kate Burton, Dana Ivey, and Christine Lahti.

His second Broadway appearance was in the 1983 musical Merlin, starring Chita Rivera and magician Doug Henning. This was followed by Wind in the Willows as Mr. Toad, Some Americans Abroad at Lincoln Center, and the national tour of Neil Simon's Broadway Bound.

In 1991, Lane starred with George C. Scott again in a revival of Paul Osborne's On Borrowed Time at the Circle in the Square Theatre on Broadway. In 1992, he starred in the hit revival of Guys and Dolls, receiving his first Tony nomination, as well as Drama Desk and Outer Critics Circle Awards, playing the character who lent him his name, opposite Peter Gallagher and Faith Prince.

His professional association with his close friend the playwright Terrence McNally includes roles in The Lisbon Traviata (Drama Desk and Lucille Lortel Awards), Bad Habits, Lips Together, Teeth Apart, Love! Valour! Compassion! (Obie, Drama Desk and Outer Critics Circle Awards), Dedication or the Stuff of Dreams (Drama Desk nomination), The Last Mile on PBS Great Performances, and the film version of Frankie and Johnny. The early 1990s began a stretch of successful Broadway shows for Lane. In 1993, he portrayed Sid Caesar-like Max Prince in Neil Simon's Laughter on the 23rd Floor, inspired by Simon's early career writing sketches for Your Show of Shows. In 1996, he starred in the hit revival of A Funny Thing Happened on the Way to the Forum, for which he won the Tony, Drama Desk and Outer Critics Circle Awards.

His association with Sondheim began with the workshop of Assassins, and after Forum he appeared with Victor Garber in the workshop of Wise Guys (later retitled Road Show). Their collaboration continued when he revised the original book for and starred in the Broadway debut of the composer's The Frogs at Lincoln Center in 2004. He also sang a song written especially for him by Sondheim in the film The Birdcage, for which he received his first Golden Globe nomination.

In addition to the McNally plays, Lane has appeared in numerous other Off Broadway productions, including Love (the musical version of Murray Schisgal's Luv), Measure for Measure directed by Joseph Papp in Central Park, for which he received the St. Clair Bayfield Award, The Common Pursuit, The Film Society, Mizlansky/Zilinsky or Schmucks, In a Pig's Valise, Trumbo, She Stoops to Conquer, The Merry Wives of Windsor and A Midsummer Night's Dream. In fact, in 1992 he won an Obie Award for Sustained Excellence of Performance. He also appeared at the Williamstown Theatre Festival in The School for Scandal and John Guare's Moon Over Miami.

In 1994, Lane voiced Timon, the meerkat, in Disney's blockbuster animated film The Lion King and in 1995 performed The Wizard of Oz in Concert at Lincoln Center to benefit the Children's Defense Fund. The performance was originally broadcast on Turner Network Television (TNT).

Lane won his second Tony Award for his portrayal of Max Bialystock in the blockbuster musical version of Mel Brooks's The Producers, as well as Drama Desk and Outer Critics Circle Awards. He later replaced Richard Dreyfuss in the role in 2004 at London's Theatre Royal Drury Lane at the last minute, and went on to win the Olivier Award as Best Actor in a Musical. He recreated his performance for the film version, for which he received his second Golden Globe nomination for Best Performance by an Actor in a Motion Picture, Musical or Comedy.

Lane has performed two roles originated by Zero Mostel, Pseudolus in A Funny Thing Happened on the Way to the Forum and Max Bialystock in The Producers. He declined the role of Tevye in the 2004 Broadway revival of Fiddler on the Roof because he didn't want to be seen as always following in Mostel's footsteps. Coincidentally, both of Lane's Tony Awards were for Mostel's roles. In 2000, he starred in the Roundabout revival of The Man Who Came to Dinner as Sheridan Whiteside, with Jean Smart and Harriet Harris. Prior to that he starred in the Encores! production of Do Re Mi.

In 2005, Lane rejoined his Producers co-star Matthew Broderick for a successful limited run of The Odd Couple. In 2006, he took on a primarily dramatic role in a revival of Simon Gray's Butley, having played the role to great success at The Huntington Theater in Boston in 2003. He and Broderick were awarded adjacent stars on the Hollywood Walk of Fame in a joint ceremony on January 9, 2006. They were also immortalized as Max and Leo at Madame Tussauds Wax Museum. He then played the President of the United States in the David Mamet political satire, November, directed by Joe Mantello, followed by the critically acclaimed revival of Waiting for Godot as Estragon (Outer Critics Circle nomination) with Bill Irwin as Vladimir. He next starred in the musical version of The Addams Family as Gomez (Drama Desk and Outer Critics Circle nominations). In 2008, he was inducted into the American Theatre Hall of Fame.

Lane committed to starring in a revival of the Eugene O'Neill play The Iceman Cometh at Chicago's Goodman Theatre. Lane assumed the role of Hickey, with Brian Dennehy playing the role of Larry Slade. The production was directed by the Artistic Director of the Goodman Theatre Robert Falls. It received rave reviews, and became the most successful show in the history of the Goodman. It also won six Jeff Awards, including Best Ensemble, Director, and Production. In the spring of 2013, he returned to Broadway in The Nance, a new play by Douglas Carter Beane; a Lincoln Center production directed by Jack O'Brien. He received Tony and Drama Desk Award nominations, and won the Outer Critics Circle Award and the Drama League Award for Distinguished Performance.

A reporter once asked Lane if he was gay; he replied, "I'm 40, single and work a lot in the musical theater. You do the math."  When he told his mother he was gay, she replied, "I would rather you were dead," to which he replied, "I knew you'd understand." Lane, who came out publicly after the death of Matthew Shepard, has been a long-time board member of and fundraiser for Broadway Cares/Equity Fights AIDS, and has been honored by the Human Rights Campaign, Gay & Lesbian Alliance Against Defamation, and The Trevor Project  for his work in the LGBT community. Lane resides in New York City with his long-time partner, producer Devlin Elliott and has maintained close friendships with Matthew Broderick, Mel Brooks, and Ernie Sabella.

He has received three Daytime Emmy nominations for George and Martha, Timon and Pumbaa and Teacher's Pet, and won two Daytime Emmy Awards, in 1995 for Disney's Timon and Pumbaa and in 2000 for Disney's Teacher's Pet. He has also received five Primetime Emmy Award nominations for guest appearances on Frasier, Mad About You, Modern Family, and The Good Wife. In 1999, he won the People's Choice Award for Favorite Male Performer in a New TV Series.

1997 Golden Globe Award for Best Performance by an Actor in a Motion Picture, Musical or Comedy – The Birdcage

2001 Tony Award for Best Actor in a Musical – The Producers

2005 Olivier Award for Best Actor in a Musical – The Producers

2013 Drama League Award for Distinguished Performance - The Nance * 2013 The Joan and Joseph F. Cullman Award for Extraordinary Creativity - The Nance

2013 Tony Award for Leading Actor in a Play - The Nance

Also the winner of 5 Outer Critics Circle Awards for Guys and Dolls, Love! Valour! Compassion!, A Funny Thing Happened on the Way to the Forum, The Producers, and The Nance

His television credits include One of the Boys with Mickey Rooney and Dana Carvey, The Days and Nights of Molly Dodd, the title role in The Man Who Came to Dinner, broadcast live on P.B.S., and the voices of the title characters in two Disney animated series, Teacher's Pet and Timon & Pumbaa, and George and Martha for HBO. He has also made guest appearances on Miami Vice, Mad About You, Sex and the City, Frasier, Curb Your Enthusiasm, Absolutely Fabulous, and 30 Rock, as well as recurring characters on Modern Family and The Good Wife.

He has hosted Saturday Night Live, The Tony Awards (once as host for the 50th anniversary telecast, and three as co-host, with Glenn Close and Gregory Hines; Rosie O'Donnell; and Matthew Broderick respectively), and appeared on Great Performances (Alice In Wonderland, The Last Mile, Guys and Dolls: Off The Record, My Favorite Broadway: The Love Songs, Recording The Producers: A Musical Romp With Mel Brooks, and as host of the 30th anniversary telecast, A Celebration in Song). He has starred in two television films, The Boys Next Door and Laughter on the 23rd Floor. With the Boston Pops, he performed a tribute concert of Danny Kaye material, as well as appearing in the Harry Connick Christmas Special; Merry Christmas, George Bailey; The Wizard of Oz in Concert; and A Muppet Christmas: Letters to Santa. His attempts at a regular series of his own, Encore! Encore! and Charlie Lawrence, were ratings disappointments.