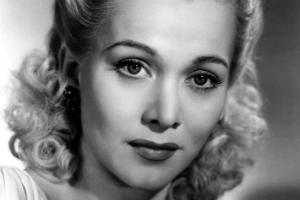 Carole Landis (January 1, 1919 – July 5, 1948) was an American film and stage actress, who worked as a contract-player for Twentieth Century-Fox in the 1940s. Her breakthrough role was as the female lead in the 1940 film One Million B.C., with United Artists.

She died of an intentional drug overdose at the age of 29 in 1948. After her death, newspapers headlined stories about the actress, some with the title "The Actress Who Could Have Been...But Never Was."

Landis was born Frances Lillian Mary Ridste in Fairchild, Wisconsin. Her mother, Clara (née Stentek), was a Polish farmer's daughter. A Time magazine article published the month of her death identifies her father as a "drifting railroad mechanic"; according to a 2005 biography, the mother was married to Norwegian Alfred Ridste, who abandoned the family before Landis was born, and it was Charles Fenner, her mother's second husband, who most likely was Landis' biological father. She was the youngest of five children, two of whom died in childhood. Her early years were filled with poverty and sexual abuse.

In January 1934, 15-year-old Landis married her 19-year-old neighbor, Irving Wheeler, but the marriage was annulled in February 1934. They later remarried on August 25, 1934. Wheeler named Busby Berkeley in an alienation of affections lawsuit in 1938 involving Landis, and they divorced in 1939.

Landis dropped out of high school at age 15 and set forth on a career path to show business. She started out as a hula dancer in a San Francisco nightclub and later sang with a dance band. She bleached her hair blonde and changed her name to "Carole Landis" after her favorite actress, Carole Lombard. After saving $100 she moved to Hollywood.

Her 1937 film debut was as an extra in A Star Is Born; she also appeared in various horse operas. She posed for hundreds of cheesecake photographs. She continued appearing in bit parts until 1940 when Hal Roach cast her as a cave girl in One Million B.C.. The movie was a sensation and turned Landis into a star. A press agent nicknamed her "The Ping Girl" (because "she makes you purr").

Landis appeared in a string of successful films in the early '40s, usually as the second female lead. In a time when the singing of many actresses was dubbed in, Landis's own voice was considered good enough and was used in her few musical roles. Landis landed a contract with Twentieth Century-Fox and began a sexual relationship with Darryl F. Zanuck. She had roles playing opposite fellow pin-up girl Betty Grable in Moon Over Miami and I Wake Up Screaming, both in 1941. When Landis ended her relationship with Zanuck, her career suffered and she was assigned roles in B-movies.

Her final two films Noose and Brass Monkey were both made in Great Britain.

In 1942, she toured with comedienne Martha Raye, dancer Mitzi Mayfair and actress Kay Francis with a USO troupe in England and North Africa. Two years later, she entertained soldiers in the South Pacific with Jack Benny. Landis traveled more than 100,000 miles during the war and spent more time visiting troops than any other actress. Landis became a popular pin-up with servicemen during World War II.

In 1945 she starred on Broadway in the musical A Lady Says Yes with Jacqueline Susann, with whom she reportedly had an affair. Susann purportedly based the character Jennifer North in her book Valley of the Dolls on Landis.

Landis wrote several newspaper and magazine articles about her experiences during the war, including the 1944 book Four Jills in a Jeep, which was later made into a movie, costarring Kay Francis, Martha Raye, and Mitzi Mayfair. She also wrote the foreword to Victor Herman's cartoon book Winnie the WAC.

In June 1939, director-choreographer Busby Berkeley proposed to Landis, but later broke it off. In 1940 she married yacht broker Willis Hunt Jr., a man she called "sarcastic" and left after two months. Two years later, she met an Army Air Corps captain named Thomas Wallace in London, and married him in a church ceremony; they divorced a couple of years later. Landis wanted to have children but was unable to conceive due to endometriosis.

In 1945, Landis married Broadway producer W. Horace Schmidlapp. By 1948, her career was in decline and her marriage with Schmidlapp was collapsing. She entered into a romance with actor Rex Harrison, who was then married to actress Lilli Palmer.

Landis was reportedly crushed when Harrison refused to divorce his wife for her; unable to cope any longer, she committed suicide in her Pacific Palisades home at 1465 Capri Drive by taking an overdose of Seconal. She had spent her final night alive with Harrison.

The next afternoon, Harrison and the maid discovered her on the bathroom floor. Harrison waited several hours before he called a doctor and the police. According to some sources, Landis left two suicide notes, one for her mother and the second for Harrison who instructed his lawyers to destroy it. During a coroner's inquest, Harrison denied knowing any motive for her suicide and told the coroner he did not know of the existence of a second suicide note. Landis' official web site, which is owned by her family, has questioned the events of Landis' death and the coroner's ruling of suicide.

Carole Landis was interred in Forest Lawn Memorial Park Cemetery in Glendale, California in plot 814 of the "Everlasting Love" section. Among the celebrities at her funeral were Cesar Romero, Van Johnson, and Pat O'Brien. Harrison attended with his wife.

Landis has a star on the Hollywood Walk of Fame, at 1765 Vine Street.