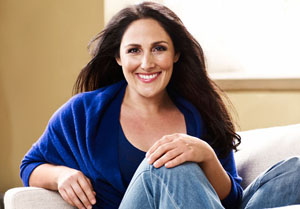 Early life
Lake was born in Hastings-on-Hudson, New York to Jill, a homemaker, and Barry Lake, a pharmacist. She attended Ithaca College and the Professional Children's School.

Early career
Lake first appeared to audiences when she played the hefty Tracy Turnblad, the main character of the 1988 John Waters film Hairspray. Her role as the overweight Red Cross recreation worker "Holly the Donut Dolly" in the television series China Beach gave her additional visibility, and she was eventually chosen to host her eponymous talk show. At the same time, she publicly began a weight loss regimen, ultimately losing around 125 pounds (57 kg).

Talk show
Ricki Lake debuted on September 13, 1993. A typical show might present several lower middle class women, each claiming to be "all that" (the show's catchphrase for someone with high fashion and personal appeal) with others debating the assertion. Other shows would present someone in an obviously bad relationship and have Lake recommend, "Dump that zero and get yourself a hero!" Once Lake became a mother, feel-good mother-and-child shows became common.

Lake's talk show has often been the butt of satire. It was repeatedly parodied during the 1990s on Saturday Night Live, with male cast member Jay Mohr impersonating Lake in drag. In addition, it was mentioned in the chorus of the hit 1998 song "Pretty Fly (for a White Guy)" by The Offspring: "So if you don't rate, just overcompensate, at least you'll know you can always go on Ricki Lake."

In 2000, Lake told Rosie O'Donnell in an interview that she had signed a contract for four years. Although Sony Pictures Television had many stations contracted through the 2004-2005 season, Lake decided to end the show in August 2004, citing (among other things) a desire to spend time with her family. She moved from Los Angeles to New York to tape the 11th season of the show, then returned to California when taping was complete.

Other roles
Lake was in talks to star in an untitled CBS comedy, but no further episodes were commissioned after the filming of the pilot. Most recently, she has appeared in a recurring role on CBS's long-running sitcom The King of Queens, playing Doug Heffernan's sister, Stephanie.

She has also appeared in the films Cabin Boy, Last Exit to Brooklyn, Cookie, Mrs. Winterbourne, and Inside Monkey Zetterland, and she often appears in small roles in John Waters films, such as Cecil B. Demented, Cry-Baby, and Serial Mom. She also starred in the TV movie Baby Cakes.

Currently
According to Broadcasting & Cable magazine Lake was crafting a talk-show comeback, which would have been somewhat similar to The Ricki Lake Show, but more mature. Rumors suggested the new show might have launched as early as September 2006. However, there have been no more developments released publicly on any sort of deal, and Lake wasn't at NATPE 2006, where most new shows are pitched. An associate producer from The Ricki Lake Show stated that Sony Pictures Television/Columbia TriStar, the company that syndicated her previous show, was not involved. Sources say other companies, including TelePictures, which syndicated Jenny Jones' show, were in play.

Lake was the host of CBS' Gameshow Marathon, which re-created classic game shows with celebrity contestants. The series premiered on May 31, 2006 and ran through the end of June. She also inked a development deal with Gameshow Marathon production company FremantleMedia for other ventures, including creating and producing future programs and projects. Because of her work on Gameshow Marathon, Lake holds the record for hosting the most game shows, with seven.

On March 16, 2007, several sources reported that Lake was supposed to a star in a comedy produced by Warner Bros. Television for ABC titled "The Middle," which was set to begin in 2007. The show centered on an extended lower-middle-class family in the Midwest; Lake would've played the central character and the narrator of the show, a harried but game mom. Also cast in the pilot is Brenna O'Brien as the family's middle child. ABC had green-lighted the pilot for the fall 2007-2008 TV season, only to pass on the project at first, but at the last minute changed its mind in July 2007 and might go forward as a possible midseason replacement.

Ricki made a cameo appearance in 2007 movie musical Hairspray as a Willam Morris talent agent and teamed up with star Nikki Blonsky (who plays Tracy in the film adaptation of the Broadway musical) and Marissa Jaret Winokur (who played Tracy in the Broadway musical version that inspired the films adaptation of the musical) to record "Mama I'm A Big Girl Now" for the soundtrack, which is played at the film's end credits. She will reunite with original "Hairspray" co-star Deborah Harry for the upcoming film "Grammercy Park Hotel", set for a 2008 release. In March 2007, at the World Poker Tournament, when asked, "What's happening currently?", Lake said, "Now I have a documentary I have been working on for 3 (years) that's coming out in a couple months." "It's about the politics of birth, it's called "The Business of Being Born", and it's my first executive producing gig." "It's been my passion for a long time since I had my children. In some ways I feel like it's the best thing I've ever done".