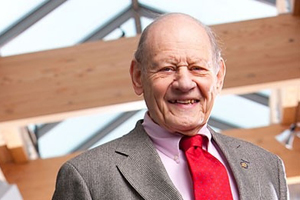 American scientist, editor of The Humanist and founding member of CSICOP (Committee for the Scientific Investigation of Claims of the Paranormal) in the '70s, who claims to be a "critical thinker" but found to be rigidly biased in favor of censorship and suppressing any evidence that might be contrary to his personal bias. It was 1976 when Kurtz published the infamous 'Objections to Astrology' signed by 186 noted scientists. The founder of CSICOP, he and his followers call themselves intellectual skeptics and profess their goal to be that of saving humanity from such superstitions as religion, astrology, and anything connected with a non-materialistic paradigm. CSICOP's membership has many tenured university professors with high positions in the academia. A disproportionate many are magicians, adept in dealing with media and public presentations. The majority are male, white, on the geriatric side; some are macho and brilliant.

Kurtz has been accused of abandoning scientific principles in an effort to disprove astrology, notably focusing on Gauquelin's Mars Effect. When they found that the test cases were holding up, they abandoned their study. None of the scientists who signed the petition were proficient in astrology, and indeed knew nothing more than local superstition.

CSICOP never loses; one of their most potent forces is their ability to deal with the press. Their operating manual devotes 1/3, seventeen pages, on how to handle the media, while only three pages discusses how to research.

Their tactic is to set up a debate with astrologers, psychics, any new age practitioner and then to debunk and invite the press to watch and report.