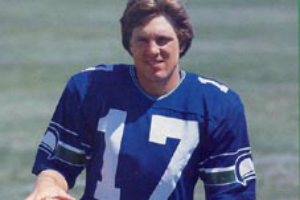 At Milton, an obscure and now-defunct small private college in Milton, Wisconsin, Krieg began as the 7th-string quarterback for his school's NAIA team. Given the opportunity to play in the fourth game of his freshman season, he completed four passes—three of them for touchdowns—and continued to play well enough to start for the rest of his college career.

Krieg is one of the most prolific passers in NFL history, ranking among the all-time top 15 in most passing categories.

Undrafted in 1980, Krieg tried out for the Seahawks and caught on as a third-string quarterback. He saw the field only once, taking a few unremarkable snaps in the final game of his team's dismal 1980 season.

By the middle of the 1981 season, Krieg bypassed Sam Adkins on the depth chart to become the Seahawks' second-string quarterback. When injuries sidelined Jim Zorn late in the season, Krieg started the last three games and played well, helping the team record two of its six wins that year. In his first NFL start against the New York Jets, Krieg ran for one touchdown and threw for two others, including a 57-yard game-winning completion to Steve Largent.

Krieg began the strike-shortened 1982 season as the Seahawks' starting quarterback and played respectably until a thumb injury sidelined him for several weeks. Zorn reclaimed his former role, but played inconsistently. When Zorn continued to struggle in the final game of the season, Coach Mike McCormack inserted Krieg, who rallied Seattle to a victory over the Denver Broncos.

Returning to the bench at the outset of the 1983 campaign, Krieg remained there until Zorn's performance faltered in midseason. At that point, Coach Chuck Knox named Krieg the Seahawks' new starting quarterback. The Milton product's consistent play complemented the considerable talents of All-Pro wide receiver Steve Largent and Pro Bowl running back Curt Warner, allowing the Seahawks to make the playoffs for the first time in the team's history. Krieg played brilliantly in the wild card round of the playoffs, helping his team rout Steve DeBerg and the Broncos in the Kingdome. The next week, Krieg's steady performance helped the Seahawks upset Dan Marino and the Miami Dolphins on the road. However, Krieg and Seahawks offense were overwhelmed by the aggressive defense of the L.A. Raiders in the American Football Conference Championship Game. Knox replaced Krieg with Jim Zorn to finish out the game as the visiting Seahawks lost to the Los Angeles Raiders, who would go on to win Super Bowl XVIII.

Despite a prodigious effort by Mike McCormack to recruit Warren Moon to join the QB ranks in Seattle, Krieg resumed his starting role 1984 after Moon declined Seattle's offer and chose to play for the Houston Oilers instead. In the year's first game, a knee injury sidelined the Seahawks' star running back Curt Warner for the rest of the season, forcing Coach Knox to discard his run-oriented "Ground Chuck" offense and adopt a new philosophy: "Air Knox." Rising to the occasion, Krieg threw for 3,671 yards and 32 touchdowns, leading his team to a 12-4 record and another wild card playoff appearance. In recognition of this impressive performance, Krieg's NFL peers named him to his first Pro Bowl. Moreover, his steady play helped the Seahawks eliminate the reigning Super Bowl champion Raiders in a wild card showdown in the Kingdome. Krieg also played well in Miami the following week, but the Dolphins defeated the Seahawks and went on to lose Super Bowl XIX.

Krieg's inconsistency contributed to the mediocrity of the Seahawks' 1985 campaign. In the team's eight victories, Krieg's passer rating averaged more than 114—an excellent mark—but in the Seahawks' eight losses, his rating hovered just above a dismal 40.

In 1986, Krieg played well initially, leading the Seahawks to a 5-3 record. However, he faltered in midseason, so Coach Knox benched him in favor of Gale Gilbert. When that remedy failed to avert a four-game losing streak, Knox gave Krieg another chance. Nicknamed "Mudbone" by his Seattle teammates, Krieg led the Seahawks on five-game winning streak to finish the season, during which his passer rating exceeded 126. That December, Krieg was named AFC Player of the Month. However, the 10-6 Seahawks failed to qualify for the playoffs.

Despite a brief midseason slump, Krieg played more consistently during the strike-shortened 1987 season. In the year's first game, Krieg set a team record by throwing his 108th touchdown; in less than four years as a starter, Krieg had broken a record Zorn had compiled over more than seven starting seasons. Krieg proceeded to lead the Seahawks to another playoff appearance, but Krieg's performance failed to prevent a narrow loss on the road in the first round against the Houston Oilers.

During the offseason, the Seahawks acquired Kelly Stouffer from the Phoenix Cardinals, and began to groom him as the franchise quarterback of the future.

Perhaps due to this increased competition, Krieg's consistency increased further in 1988. Although he missed seven games with a separated shoulder, his excellent play helped propel the Seahawks to their first AFC West Division Championship. In the regular season finale, Krieg dissected the Raiders' secondary, throwing for 410 yards and four touchdowns, thereby securing the division title and relegating the Raiders to a wild card berth. However, Krieg's pedestrian performance on the road in the playoffs contributed to the Seahawks' swift elimination at the hands of the Cincinnati Bengals. Nevertheless, Krieg's strong regular season showing earned him another Pro Bowl appearance.

In the spring of 1989, Krieg competed in ABC's prestigious Superstars competition, a series of physical challenges pitting athletes from various sports against one another. Krieg placed third overall, behind Willie Gault and Herschel Walker. Krieg placed first in the basketball and rowing events, beating athletes including Gault, Walker, Randall Cunningham, Evander Holyfield, and Carl Lewis.

In 1989, Krieg struggled to lead an offense depleted by injuries. All-Pro Steve Largent missed several games because of a fractured elbow. The running game sputtered as injuries slowed Curt Warner, and the aging offensive line struggled to open holes for him. Krieg came to rely on fullback John L. Williams, who replaced Largent as the team's perennial leading receiver. Although the Seahawks managed only a 7-9 record, Krieg played well enough to earn a return trip to the Pro Bowl, where he performed impressively, helping lead the AFC to victory.

Krieg's burden grew heavier in 1990, with the retirement of Largent and the continued decline of the offensive line and the running game. Consequently, inconsistency again plagued Krieg. His play ranged from awful (2 games with passer ratings below 15) to mediocre (5 games in the 50s and 60s) to good (4 games in the 70s, 80s or 90s) to brilliant (5 games with ratings over 100). In the most memorable game of the season, on November 11, the Seahawks made their annual visit to Arrowhead Stadium, where they had not won since 1980. The Kansas City Chiefs sacked Krieg 9 times, including an NFL-record 7 sacks by linebacker Derrick Thomas. However, on the last play of the game, as time expired, Thomas closed in for yet another apparent sack, but Krieg eluded the linebacker and threw a 25-yard touchdown pass to wide receiver Paul Skansi for the win. Krieg's leadership helped the Seahawks compile a respectable 9-7 record in 1990, but they again missed the playoffs.

In 1991, the Seahawks spent a first-round draft pick on another quarterback of the future, Dan McGwire.

After breaking his thumb in the season opener, Krieg missed 6 games in 1991. Without a strong supporting cast, Krieg turned in another inconsistent year. The Seahawks finished a disappointing 7-9, leading to the resignation of Coach Knox. Seattle General Manager Tom Flores decided to retain Stouffer and McGwire, and to let Krieg become a free agent. That decision helped doom the Seahawks to several seasons of misery and mediocrity under a succession of uninspired quarterbacks.

Krieg signed with the Seahawks' division rivals, the Kansas City Chiefs, and started for them throughout 1992, leading his new team to a 10-6 record, including two victories over Seattle. However, Krieg's poor performance in the playoffs on the road contributed to the wild card Chiefs' swift elimination by the San Diego Chargers.

In the offseason, the Chiefs signed Joe Montana and made him their starting quarterback. However, Krieg still saw substantial action in 1993, relieving Montana in six games, and starting five games for the oft-injured Hall of Famer. Together, Montana and Krieg led the Chiefs to an 11-5 record and an AFC West Championship. In the first round of the playoffs, when the Chiefs hosted the Pittsburgh Steelers, an injured Montana briefly left the game. In relief, Krieg threw just one pass, a 23-yard touchdown. Two weeks later, at the AFC Championship Game in Buffalo, Montana sustained a concussion and left the game in the third quarter. Krieg led a 90-yard touchdown drive to bring the Chiefs within 7 points, but the Buffalo Bills scored 10 unanswered points in the fourth quarter to qualify for their fourth straight Super Bowl appearance.

In 1994, Krieg signed with the Detroit Lions to back up Scott Mitchell. Although Mitchell's erratic play contributed to the team's poor 4-5 start, coach Wayne Fontes stuck with the young quarterback as his starter until an injury sidelined him in mid-season. Krieg came off the bench and ignited a dynamic offense showcasing the talents of running back Barry Sanders and wide receiver Herman Moore. Statistically, the 1994 season was the best of the journeyman's career: Krieg completed 61.8% of his passes and threw 14 touchdowns versus only 3 interceptions, for a passer rating of 101.7. Moreover, Krieg's leadership rallied the Lions to a 5-2 regular season finish and a wild card playoff berth. Despite Krieg's solid play, the visiting Lions lost narrowly to the Green Bay Packers in the first round of the playoffs. Although Krieg had set Detroit Lions regular-season records for fewest passes intercepted (3) and highest passer rating (101.7), the team decided to stick with Mitchell and let Krieg become a free agent.

The Arizona Cardinals rewarded Krieg for his 1994 performance by signing him to be their starting quarterback in 1995. However, operating behind a porous offensive line, Krieg had another inconsistent year. Again, his passer rating told the tale: 3 horrible games (below 50), 4 mediocre ones (50s and 60s), 5 good efforts (70s and 80s), and 4 outstanding performances (90s or better). However, even Krieg's good games rarely resulted in Cardinals victories. The team went 4-12, and Coach Buddy Ryan and Krieg lost their jobs.

In 1996, the Chicago Bears signed Krieg to back up Erik Kramer. Although Kramer's poor play contributed to the Bears' feeble 1-3 beginning, Coach Dave Wannstedt allowed him to continue starting until an injury sidelined him for the remainder of the season. Krieg—by then 38 years old—came off the bench and helped rally an injury-wracked Bears team to a respectable 6-6 finish. Statistically, Krieg's performance was inconsistent: his passer rating ranged from subpar (4 games below 60) to mediocre (2 games in the 60s) to good (3 games in the 80s and 90s) to outstanding (3 games over 100).

Dave Krieg finished his career with the Tennessee Oilers, backing up the seldom-injured Steve McNair in 1997 and 1998. Even when the young starter played poorly, coach Jeff Fisher declined to insert Krieg. On rare occasions, Krieg would mop up in garbage time or take a knee at the end of a game.

However, in the 1998 season opener in Cincinnati, McNair exited the game with a bruised elbow. Krieg—by then nearly 40 years old—came off the bench to rally the Oilers to victory. Although McNair recovered from his injury and could have re-entered the game, the team let Krieg finish. "Dave was in the zone," McNair explained. "He was doing a great job moving the team up and down the field. It's a matter of doing what's right (for the team). At that time, what was right was letting Dave stay in."

Later that month, the Jacksonville Jaguars knocked McNair out of a game, but Krieg's comeback effort failed. Krieg retired after the 1998 season.