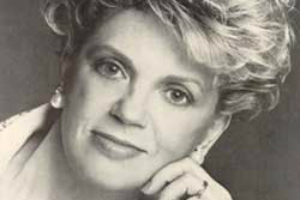 Judith Tarcher (born on January 9, 1928) is a Jewish-American novelist who writes in the romance genre. Her works include Scruples, Princess Daisy, and Till We Meet Again.

Judith Krantz, known as Judy, grew up in New York City. She was the "youngest, smartest, and shortest girl" in her year. After graduating from the upscale Birch Wathen School at age 16, Krantz enrolled at Wellesley College.

Krantz told the Boston Globe in 1982 that she attended Wellesley with three goals: to date, to read every novel in the library, and to graduate. "Torchy", as her dormmates named her, held the dorm dating record as the only one to have 13 consecutive dates with 13 different men. Her grades, unfortunately, were not as impressive as her extracurricular activities. Krantz earned one A-plus in English, but had a B- average in her major and C average in everything else. Krantz had the opportunity to improve her marks when she took a short-story class during her sophomore year. Although the professor enjoyed her writing, he refused to give her an A because she had atrocious spelling, and he thought the B would teach her a lesson. Krantz claims to have learned the lesson well -- she did not write fiction again for 31 years.

After graduating from Wellesley in 1948, Krantz moved to Paris, where she worked in fashion public relations. She enjoyed attending elegant parties, borrowing couture gowns, and meeting famous people such as Marlene Dietrich, Orson Welles and Hubert de Givenchy.

The following year, Krantz returned to New York, where she embarked on a career in magazine journalism. She worked in the fiction department at Good Housekeeping before being promoted to fashion editor and having the opportunity to write several articles for the magazine.

In 1953 Krantz attended a Fourth of July party hosted by her high school friend, Barbara Walters. There she met her future husband, the future film producer and television producer Steve Krantz. The two were married the following year, on February 19, 1954. Three years later, she gave birth to their first son, and she gave up her full-time job, choosing instead to write part-time from home. She wrote many free-lance articles for Maclean's, McCall's, Ladies' Home Journal, and Cosmopolitan. Her best-known article by far was "The Myth of the Multiple Orgasm", which was published in Cosmopolitan. Her magazine career gave Krantz an opportunity to interview many prominent women.

In 1976, Krantz's husband decided to take flying lessons. Krantz chose to join him, despite the fact that she was afraid of flying. Having conquered that fear, she determined to face her other fears. For the first time since college, she attempted to write fiction. Although her husband had been insisting for years that she was a natural storyteller, Krantz believed that she was writing the book simply to prove to him that she was not able to write good fiction.

She completed her first novel, Scruples, nine months later. The year it was published, 1978, Krantz turned 50. In an unusual turn of events for the time, the books were not copyrighted under her own name but by Steve Krantz Productions. That first novel reached the number one spot on the New York Times bestseller list. Her second novel, Princess Daisy, netted her an astounding $5 million before its publication. The paperback rights sold for a then-record $3.2 million. Princess Daisy and her next two novels also became number one bestsellers. Over 80 million copies of her books are in print in over 50 languages. Seven of her novels have also been adapted for television (as either films or mini-series), with her husband serving as executive producer for some of them. She has also written one original mini-series for television, Judith Krantz's "Secrets", in 1992.

Krantz serves on the Advisory Board of Compassion & Choices, an organization dedicated to providing choices for the dying. In 2006 she also joined the Board of the Music Center of Los Angeles County.

Krantz's husband Steve Krantz died in 2007 of pneumonia. They had two sons, Tony and Nicholas Krantz, both of whom reside in Los Angeles. Krantz was the sister-in-law of Shari Lewis, who was married to Krantz's brother, Jeremy. Mrs. Krantz now has two grandchildren, Kate and Michael Krantz.