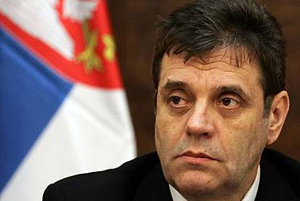 Vojislav Koštunica ( born 24 March 1944, Belgrade, Yugoslavia, now Serbia) is a Serbian politician and the President of the Democratic Party of Serbia. He was the last President of the Federal Republic of Yugoslavia, succeeding Slobodan Miloševi? and serving from 2000 to 2003. He also served two terms as the Prime Minister of Serbia, from 2004 to 2007 and from 2007 to 2008.

Career
A graduate from the University of Belgrade's Law School with a Ph.D., Koštunica lost his job as Professor of Law at this institution in 1974, after criticizing Josip Broz Tito's Communist government. In 1989, he became one of the founders of the Democratic Party. He left the Democratic Party in July 1992 over opposing views in leadership and formed the Democratic Party of Serbia (DSS), of which he is still president.

Koštunica is a conservative politician with no connection to the old Communist Party (from which Slobodan Miloševi?'s party originated). Supported by both nationalistic and pro-Western voters, the Democratic Opposition of Serbia backed him in the presidential election of September 2000. After turbulent events of October 2000, Koštunica was finally declared the winner of the election and remained president of the Federal Republic of Yugoslavia until February 2003, when the state was replaced by Serbia and Montenegro and the position he held was abolished. Koštunica opposed the extradition of his predecessor, Slobodan Miloševi?, and has stated his opposition to the Hague Tribunal several times.

Following the parliamentary elections in December 2003, in which the DSS emerged as the largest of the pro-EU parties, Koštunica became prime minister in March 2004 at the head of the new minority government of Serbia, albeit with the support of the Socialist Party of Serbia. However, as a result of the bad showing of the government candidate Dragan Marši?anin in the Serbian presidential election, 2004, Koštunica announced that fresh parliamentary elections should be expected by the end of the year just following the adoption of a new Constitution for Serbia. Since then, the minority government of Vojislav Koštunica has maintained a frail coalition government.

In 15 May 2007, after a brief crisis in his coalition, he was sworn in for his second term as prime minister.

Kosovo
On 21 February 2008, following Kosovo's declaration of independence, Kostunica made an emotional speech in Belgrade, which included the following:

Dear citizens of Serbia, Serbia! What is Kosovo? Where is Kosovo? Whose is Kosovo? Is there anyone among us who is not from Kosovo? Is there anyone among us who thinks that Kosovo does not belong to us? Kosovo – that’s Serbia’s first name. Kosovo belongs to Serbia. Kosovo belongs to the Serbian people. That’s how it has been for ever. That’s how it’s going to be for ever. There is no force, no threat, and no punishment big and hideous enough for any Serb, at any time, to say anything different but, Kosovo is Serbia! Never will anyone hear from us that the Patriarchate of Pe? does not belong to us, that Visoki De?ani and Gra?anica are not ours! That the place where we were born is not ours; we and our state and our church and everything that makes us what we are today! If we as Serbs renounce Serbianhood, our origin, our Kosovo, our ancestors and our history – then, who are we Serbs? What is our name then?

On 25 February 2008, Koštunica demanded that the United States rescind its recognition of Kosovo, warning that "there will be no stability" until the "fake state" is annulled.

On 8 March 2008, Koštunica, as Prime Minister of Serbia, called for new elections on 11 May after the collapse of his party's coalition with the Democratic Party over European Union issues and Kosovo's declaration of independence.

European Union
On 4 April 2008, Koštunica stated that EU membership is no longer on agenda for Serbia. He said that before EU accession continuation Serbia and EU must discuss the matter of borders and Serbia’s territorial integrity. He said that Serbia must not by no means sign the Stabilisation and Association Agreement. He referred to the agreement as «Solana's agreement».

On 21 April 2008 Koštunica said that the SAA is in the interests of Olli Rehn and Javier Solana and not in Serbia's state interests. He also said that "NATO pact cannot claim that Serbia recognized Kosovo’s independence with that signature." and that "the only thing the NATO pact will be able to claim is that individual parties signed Solana’s agreement.".

On 27 April 2008 he said that anyone who signed the SAA on behalf of Serbia would become an accomplice to tearing Serbia apart. He also implied there is a cover-up of something in the agreement by saying: "I am convinced every Serbian sees that things are being covered up, and that there is something seriously amiss with the Solana agreement." and he asked "who in Serbia dares to ignore these facts and conceal the real goal of Solana's agreement.".

On 28 April 2008 he said that "the signature will not be valid for Serbia and whoever signs the SAA will have to assume responsibility for such an act".

On 1 May 2008 Koštunica said that Russian Foreign Minister Sergey Lavrov was right when he said that the SAA should have been signed but one day later on 2 May 2008 he vowed to annul the agreement after the election, calling it "a trick", "Solana's agreement" and "the Tadi?-?eli? SAA signature". He said he refers to the act of signing of the SAA as anti-Constitutional and anti-state that leads to the breakup of Serbia. Spokesperson of Koštunica's Democratic Party of Serbia stated that Tadi? was putting a seal of Judas of his party coalition to the Solana Agreement by signing it. On 4 May he called the document "a forgery and a trick".

Personal life
Koštunica lives with his wife and fellow lawyer, Zorica Radovi?, Ph.D. He is a member of the Serbian Orthodox Church. Koštunica loves dogs, and he has one called Zuca