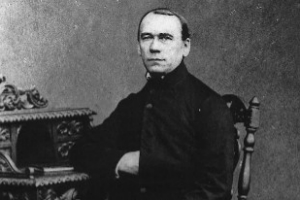 Adolph Kolping (December 8, 1813 in Kerpen — December 4, 1865 in Cologne) was a German Catholic priest, who has been beatified by the Catholic Church. He was a leader in providing social support for young workers in the cities of industrial Germany, and worldwide.

Kolping grew up as the son of a shepherd. At the age of 18 he went to Cologne as a shoemaker’s assistant. He was shocked by the living conditions of most people living there, which influenced his decision to become a priest. At age 23 he attended the Dreikönigsgymnasium and afterwards studied theology in Munich, Bonn and Cologne.

On April 10, 1845 he was ordained a priest in Cologne's Minoritenkirche. First he worked in Elberfeld (now part of Wuppertal) as a chaplain and religion teacher.

In 1847 he became the second president of the Catholic Association of Journeymen (founded the preceding year by Johann Gregor Breuer), which gave young journeymen religious and social support.

In 1854, Kolping founded the weekly newspaper Rheinische Volksblätter ("Rhine Region People’s Paper"), which quickly became one of the most successful press organs of his time.

In 1862, he became the rector of Saint Maria Empfängnis Church.

On December 4, 1865 Kolping died. He is buried in the Minoritenkirche in Cologne.

On October 27, 1991 he was beatified by Pope John Paul II. He is remembered as the "Father of All Apprentices" and his feast day is on 10 December.

In Germany today, The International Kolping Society has more than 275,000 members in 2,730 local Kolpingsfamilien ("Kolping families"), making it the largest social federation in the country. The organization, based in Cologne, is represented in 59 countries with more than 470,000 members around the world, divided into about 5,000 Kolpingsfamilien.