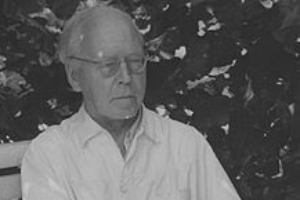 Georg Kolbe (15 April 1877 – 20 November 1947) was the leading German figure sculptor of his generation, in a vigorous, modern, simplified classical style similar to Aristide Maillol of France.

Kolbe was born in Waldheim, Saxony. Originally trained as a painter in Dresden, Munich, and Paris, he began sculpting during a stay in Rome at the turn of the century under the technical guidance of sculptor Louis Tuaillon.

In 1905, Kolbe joined the 'Berliner Sezession', which in 1913, he left to join the 'Freie Sezession'. His artistic breakthrough came in 1912 with his sculpture masterpiece "Die Tänzerin", his most famous work. As he was very interested in Asian faces, D. N. Mazumdar, father of Indian novelist Anita Desai, sat for him, resulting in a bust and a torso. In 1929, he also collaborated with Mies van der Rohe for his sculpture in the Barcelona Pavilion; Mies placed Kolbe's Alba (Dawn) in a small water basin. As the last president of the Deutscher Künstlerbund, he devoted himself to the promotion of fellow artists who were classified "degenerate".

Kolbe also made ninety-nine prints, beginning with lithographs around 1900, primarily literary illustrations. In 1919-1920, Kolbe practically did not work as a sculptor. During this time small-size sculptures and drawings became central in his works. In the 1920s, encouraged by Cassirer, he made drypoints of dancers and nudes in motion, subjects he favored in his sculpture.

Kolbe executed important commissions throughout his long career, including many for the National Socialists during the last 15 years of his life, although he reportedly refused invitation to sculpt a portrait of Adolf Hitler. The Nazis appropriated his late style of monumental, idealized athletic nudes. From 1937 to 1944, Kolbe participated regularly at Große Deutsche Kunstausstellung, organized by the Haus der Kunst, Munich. His uncharacteristically bombastic Verkündigung (Proclamation) (1924) was a focal point of the 1937 German Pavilion. Commissioned by the German-Spanish economic organization Hisma in 1939, Kolbe created a portrait bust of the Spanish dictator Francisco Franco, which was given to Hitler as a birthday present the same year. In 1944, in the final stages of World War II, Hitler and Joseph Goebbels included Kolbe in the Gottbegnadeten list of the twelve most important visual artists. Only after Kolbe's death, a Beethoven monument (1926−47) and the Ring der Statuen were installed in Frankfurt am Main. The realization of a Friedrich Nietzsche memorial in Weimar failed because of Hitler's appeal.

Kolbe died of bladder cancer in St. Hedwig-Krankenhaus in Berlin on 20 November 1947.

In 2009, an exhibition of Kolbe's Blue Ink Drawings was presented by the State Hermitage Museum, St Petersburg.

Many of Kolbe's 1000 sculptures were destroyed by confiscation, bombing and melting for war purposes. His sculptures are in many museum collections in Europe, USA and Russia.