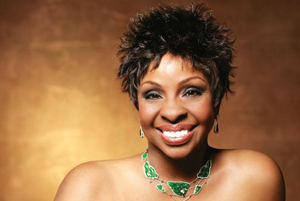 She is best known for the hits she recorded during the 1960s and 1970s, for both the Motown and Buddah Records labels, with her group Gladys Knight & the Pips, the most famous incarnation of which also included her brother Merald "Bubba" Knight and her cousins Edward Patten and William Guest. Gladys is also a member of the The Church of Jesus Christ of Latter-day Saints, the Mormons.

Gladys Knight & the Pips
Main article: Gladys Knight & the Pips
Gladys Knight was born to Merald Woodlow Knight and Sarah Elizabeth Woods. She first achieved minor fame by winning Ted Mack's Original Amateur Hour TV show contest at the age of 7 in 1952, due to her powerful singing voice. The following year, she, her brother Merald, sister Brenda, and cousins William and Elenor Guest formed a musical group called The Pips. By the end of the decade, the act had begun to tour, and had replaced Brenda Knight and Eleanor Guest with Gladys Knight's cousin Edward Patten and friend Langston George.

Gladys Knight discovered she was pregnant in 1960, and married her high school sweetheart James Newman. After a miscarriage, Knight returned to performing with the Pips. In 1961, Bobby Robinson produced the single "Every Beat of My Heart" for the group, which became a #1 R&B and #6 pop hit when released on Vee-Jay Records. In 1962, Langston George left the group, which at that time renamed itself Gladys Knight & the Pips and continued as a quartet.

In 1962, after scoring a second hit, "Letter Full of Tears", Knight became pregnant again, and gave birth to a son, Jimmy,III , that year. She retired from the road to raise a family while The Pips toured on their own. After giving birth to a daughter, Kenya, in 1963, Knight was forced to return to recording and the Pips in order to support her family.

The act left Motown for a better deal with Buddah Records in 1973, and achieved full-fledged success that year with hits such as the Grammy-winning "Midnight Train to Georgia" (their only #1 pop hit), "I've Got to Use My Imagination," and "Best Thing That Ever Happened to Me."

During this period of greater recognition, Gladys Knight made her motion picture acting debut in the film "Pipe Dreams," a romantic drama set in Alaska. The film failed at the box-office, but Knight did receive a Golden Globes Best New Actress nomination.

Knight and the Pips continued to have hits until the late 1970s, when they were forced to record separately due to legal issues, resulting in Knight's first solo LP recordings--Miss Gladys Knight (1978) on Buddah and Gladys Knight (1979) on Columbia. Having divorced James Newman, II in 1973, Knight married then Detroit mayor Coleman Young Executive Aide Barry Hankerson (future uncle of R&B singer Aaliyah). Knight and Hankerson remained married for three years, during which time they had a son, Shanga Ali. Upon their divorce, Hankerson and Knight had a heated custody battle over Shanga Ali.

In the early 1980s, Johnny Mathis invited Gladys to record two duets – "When A Child Is Born" (previously a mega hit for Mathis) and "The Lord's Prayer" which have become Christmas chestnuts.

Signing with Columbia Records in 1979 (with The Pips joining her the following year) and restored to its familiar quartet form, Gladys Knight & the Pips began releasing new material. Teaming up with stellar songwriting husband/wife duo Nickolas Ashford and Valerie Simpson (Ashford & Simpson), Knight & The Pips released the sleeper "About Love" in 1980. The album featured some the quartets best recordings in gems such as "Landlord" and "Taste Of Bitter Love". Being pleased with the result of "About Love", GKTP enlisted Ashford & Simpson for the 1981 follow-up "Touch" which contained the frenetic "I Will Fight" as well as one of the best covers of "I Will Survive", which contains a spoken excerpt from Barbra Streisand's "Free Again". After an extensive international tour, they returned to the charts with the #1 R&B hits "Save the Overtime (For Me)" (1983). And in 1987 the group released another Grammy winner--"Love Overboard". During this period, Knight kicked a gambling habit, where she fancied the game baccarat.

After a successful 1988 tour, the Pips retired and Knight began a career as a solo artist. Gladys Knight & the Pips were later inducted into the Rock and Roll Hall of Fame in 1996.

Solo career
While still with The Pips, Knight also joined with Dionne Warwick, Stevie Wonder, and Elton John on the 1986 AIDS benefit single, "That's What Friends Are For" which won a Grammy for Best Pop Performance By A Duo Or Group With Vocal. In 1989, Gladys Knight recorded the title track for the James Bond movie Licence to Kill, a top 10 hit both in the UK and Germany.

Knight made guest-starring television appearances throughout the eighties and nineties with roles on Benson, The Jeffersons, A Different World, Living Single, The Jamie Foxx Show and New York Undercover. In 1985, she co-starred on the CBS sitcom Charlie and Co. with comedian Flip Wilson. It lasted for one season.

Gladys Knight's third solo LP, Good Woman, was released in 1991. It rose to #1 on the R&B album chart and featured the #2 R&B hit "Men". Her fourth solo LP, Just for You, went gold and was nominated for the 1995 Grammy Award for Best R&B Album. During this period, Knight was briefly married to motivational speaker Les Brown. It was also during this period that tragedy struck: in 1999, her eldest son, Jimmy, Jr., died in his sleep at the age of 36.

Gladys Knight now directs the Grammy-award winning choir Saints Unified Voices and is married to William McDowell. She, her husband and the choir gives presentations at church buildings of The Church of Jesus Christ of Latter-day Saints throughout the United States.