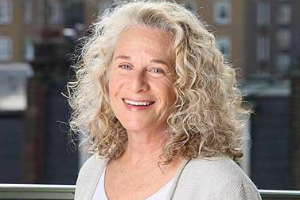 American singer and songwriter, a recording artist of soft-rock, jazz-based acoustic sound with an emphasis on lyrics.

While attending Queen's College in New York, she began writing songs professionally and also started a business and personal relationship with future husband Gerry Goffin. In 1960, her song "Will You Love Me Tomorrow?" broke the charts.

In 1967 her song with Goffin, "Go Away Little Girl" sung by Steve Lawrence hit No.1. Moving to L.A. in 1968 she formed a band that did not stay together long due to her performance nerves. She recorded her album "Tapestry" in 1970 that became the No.1 album in 1971.

In March 1972, she performed with James Taylor and Barbra Streisand at her first benefit concert. King won Best Pop Vocal Performance, Record of the Year, Album of the Year and Song of the Year at the Grammy's 3/09/1972, with her "Tapestry" album reaching ten million copies sold.

King continued to make rare public appearances, mainly in the form of fundraisers, and kept her songwriting career her main strength. Her appearance at the Madison Square Gardens benefit raised over a million for charity on 10/14/1999 where she re-united with old singing and writing partners, as well as some noted performers singing her own hits.

She suffered from extreme stage fright and rarely gave live performances. A homebody living in Malibu, driving her VW and making cookies, she had two daughters with Goffin, her first husband. Their split was amiable and she married three more times in the next decade. She had two kids with second husband Charles Larkey and after their separation, two episodic marriages. The kids have remained a constant in her life. Sherry has launched a series of kid's CDs and Louise became a singer-songwriter. Molly is an artist in New York and Levi, a grad student (2001).

Because of her need for privacy and the unconquered shyness of publicity, after leaving Hawaii, King spends much of her time on her Robinson Bar Ranch outside of Stanley, Idaho when not working in Los Angeles or New York.