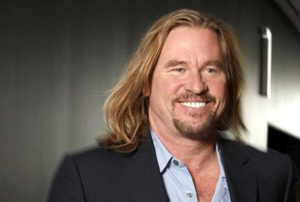 A trained stage actor, Kilmer became well-known in the mid 1980s, after a string of appearances in comedy films, starting with Top Secret! (1984), then the cult classic Real Genius (1985), as well as blockbuster action films, including a role in Top Gun and a lead role in Willow.

During the 1990s, Kilmer gained critical respect after a string of commercially successful and well reviewed films, including his roles as Jim Morrison in The Doors, Doc Holliday in 1993's Tombstone, and Batman in 1995's Batman Forever. During the early 2000s, Kilmer appeared in several well-received roles, including The Salton Sea, Spartan, and an acclaimed supporting performance in Kiss Kiss, Bang Bang.

Personal life
Kilmer was married to Joanne Whalley, an actress and former lead singer of Cindy & the Saffrons, from March 1988 to February 1996. The two met while working together on the film Willow. They share two children, daughter Mercedes, born in 1991, and son Jack, born in 1995.

Following their appearance together in Top Gun, Kilmer and co-star Tom Cruise reportedly have taken their on-screen conflict off-screen. Reports have classified the two as holding a vitriolic hatred of one another, with Kilmer even refusing to participate in a charity beach volleyball game starring the movie's cast with Cruise on the grounds that he was "dangerous", after which Tom Cruise and he physically assaulted each other for almost five minutes before it was broken up. Other actors have also noted that he prepares for his roles so extensively and meticulously, it is often done to the chagrin of cast and crew. In addition, on the set of The Island of Dr. Moreau, he and the director, John Frankenheimer, had an explosive argument on-set, after which Frankenheimer stated he would never work with Kilmer again. He never did, up until his death on July 6, 2002. It was reported that exactly the same was stated by Joel Schumacher, Kilmer's director for Batman Forever (hence Batman being recast with George Clooney).

Warwick Davis, Kilmer's co-star from the 1988 fantasy Willow, defended Kilmer in his audio commentary for the film, describing Kilmer as a very funny man and a hard working, dedicated actor. Kilmer is also an avid musician.

Kilmer owns a ranch in New Mexico where he hunts, fishes, and fly-fishes.

One of Val Kilmer's most notable quotes was in the movie Deja Vu where he proclaimed, "We could send some more notes" both to the surprise of Denzel Washington, as well as other costar Adam Goldberg, as the line was not originally in the script.