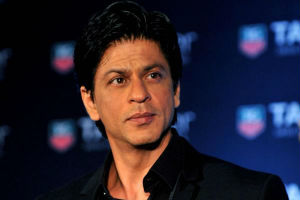 Shah Rukh Khan was born to a Muslim family but was raised by Hindus for most of his life. His father Taj Mohammed Khan was a freedom activist of Pathan background. He used to spend his time leisurely at chandanichowk in delhi. He was very fond of Tea and rumors are that he had a tea stall from the Niazi tribe, and Lateef Fatima, who was the daughter of Major General Shah Nawaz Khan of the Janjua Rajput clan , who served as a General in the Indian National Army of Subash Chandra Bose.

Shah Rukh Khan's father came to Delhi from the Kissa Kahani Bazaar in Peshawar now in Pakistan , before the Partition of India , while his mother's family came from Rawalpindi, also in Pakistan .

Khan has a sister named Shehnaz Lalarukh. Khan attended St. Columba's School where he was accomplished in sports, drama and academics. He won the Sword of Honour, an annual award bequeathed to the student who embodies most the spirit of the school. He later attended the Hansraj College (1985-1988) to earn an Honors degree in Economics. After this, he studied for a Masters Degree in Mass Communications at Jamia Millia Islamia University..

Nasreen Munni Kabir, the noted British filmmaker, produced a two-part documentary on Shah Rukh, The Inner and Outer World of Shah Rukh Khan (2005). Featuring his 2004 Temptations concert tour, the film contrasted Khan's inner world of family and daily life with the outer world of his work. Recently another book "Still Reading Khan" (2006) was released on SRK which talks about his family and his life.

Khan has been chosen for the Ordre des Arts et des Lettres (Order of the Arts and Literature) award of the French government for his “exceptional career”. His statue is available in Madame Tussaud wax museum, London.

He started his acting career in 1988 by appearing in the television series Fauji playing the role of Commando Abhimanyu Rai. He then played a minor role in the serial Circus in 1989 , which depicted the life of circus performers. That same year he also had a minor role in the television film In Which Annie Gives it Those Ones. After the death of his parents Khan moved from New Delhi to Mumbai for a fresh start in 1991. He made his Bollywood film debut in Deewana (1992) which was a box office hit and launched his career in Bollywood.

In 1993 he won acclaim for his performances as a murderer and obsessive lover respectively in the box office hits Baazigar and Darr.

In 1995 he starred in Dilwale Dulhania Le Jayenge which was a critical and commercial success and has entered its twelfth year in Mumbai theaters, grossing over 12 billion rupees in all.

Khan also won critical praise for his performances in films such as Anjaam (1994), Hey Ram (2000), Swades (2004), and Paheli (2005) which were not as successful at the box office. He is also well-known for playing the title role in Sanjay Leela Bhansali's award-winning period romance Devdas (2002) which was an adaptation of Sharat Chandra Chattopadhyay's famous novel of the same name.

In 2006 he once again collaborated with Karan Johar in the multi-starrer film Kabhi Alvida Na Kehna (2006) which was very successful in India and overseas.. That same year he played the title role in Don (2006), a remake of the 1978 hit film Don which was also successful

Khan has also produced some of the films he has starred in. However he has had mixed success as both the producer and the star of his films. He set up a production company called Dreamz Unlimited with Juhi Chawla and director Aziz Mirza in 1999. The first two of the films he produced and starred in: Phir Bhi Dil Hai Hindustani (2000) and Asoka (2001) were box office failures..

His third film, as a producer and star, Chalte Chalte (2003), was the first box office hit from his production house.. In 2004 he set up another production company called Red Chillies Entertainment and produced and starred in Main Hoon Na which was another hit at the box office.. In 2005 he produced and starred in the fantasy film Paheli, which was India's selection for the Academy Awards (foreign films category) but did not win. At the box office Paheli was a disappointment. That same year he also co-produced the supernatural horror film Kaal with Karan Johar and performed an item number for the film with Malaika Arora Khan. Kaal was moderately successful at the box office.

The forthcoming film produced by his company Red Chillies Entertainment is Om Shanti Om which he will also star in. The film will also feature cameo appearances by over 30 well-known actors in a song sequence.

Khan was then chosen as the host of the third series of the popular game show Kaun Banega Crorepati, the Indian version of Who wants to be a millionaire?, taking over from the original host Amitabh Bachchan. The show is deemed the most popular programme in Indian television history. On Monday, January 22, 2007, "KBC" aired with Khan as the new host. The season ended on April 19 2007.