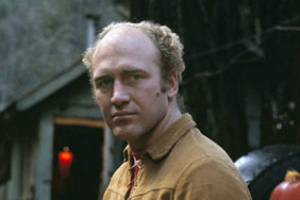 Kenneth Elton "Ken" Kesey (September 17, 1935 – November 10, 2001) was an American author, best known for his novel One Flew Over the Cuckoo's Nest (1962) and as a counter-cultural figure who considered himself a link between the Beat Generation of the 1950s and the hippies of the 1960s. "I was too young to be a beatnik, and too old to be a hippie," Kesey said in a 1999 interview with Robert K. Elder.

Ken Kesey was born in La Junta, Colorado, to dairy farmers Geneva (Smith) and Frederick A. Kesey. In 1946, the family moved to Springfield, Oregon. Kesey was a champion wrestler in both high school and college in the 174 pound weight division, and he almost qualified to be on the Olympic team until a serious shoulder injury stopped his wrestling career. He was graduated from Springfield High School in 1953. An avid reader and filmgoer, the young Kesey took John Wayne, Edgar Rice Burroughs, and Zane Grey as his role models (later naming a son Zane) and toyed with magic, ventriloquism, and hypnotism.

In 1956, while attending college at the University of Oregon in neighboring Eugene, Kesey eloped with his high-school sweetheart, Norma "Faye" Haxby, whom he had met in seventh grade. They had three children, Jed, Zane, and Shannon; Kesey had another child, Sunshine, in 1966 with fellow Merry Prankster Carolyn "Mountain Girl" Adams.

A brother of Beta Theta Pi, Kesey was graduated from the University of Oregon's School of Journalism with a degree in speech and communication in 1957. After a brief sojourn in Los Angeles, he was awarded a Woodrow Wilson National Fellowship in 1958; because he lacked the prerequisites to work toward a master's degree in English, he elected to enroll in the creative writing program at Stanford University that fall, where he would develop lifelong friendships with fellow writers Ken Babbs, Larry McMurtry, Wendell Berry, Ed McClanahan, Gurney Norman, and Robert Stone. While at Stanford, Kesey resided on Perry Lane (a historically bohemian enclave adjacent to the university golf course) and clashed with program director Wallace Stegner; according to Stone, Stegner "saw Kesey... as a threat to civilization and intellectualism and sobriety" and rejected Kesey's Stegner Fellowship applications for the 1959-60 and 1960-61 terms. Nevertheless, Kesey received the $2,000 Harper-Saxton Prize for his first novel in progress (the oft-rejected Zoo) and continued to audit the graduate writing seminar through 1960 (taught that year by Frank O'Connor and the more congenial Malcolm Cowley) on a Ford Foundation fellowship granted by Leslie Fiedler as he began the manuscript that would become One Flew Over the Cuckoo's Nest.

At the instigation of Perry Lane neighbor and Stanford psychology graduate student, Vik Lovell (heretofore acquainted with Richard Alpert and Allen Ginsberg), Kesey volunteered to take part in a CIA-financed study under the aegis of Project MKULTRA at the Menlo Park Veterans Hospital, where he worked as a night aide. The project studied the effects of psychoactive drugs, particularly LSD, psilocybin, mescaline, cocaine, aMT, and DMT on people. Kesey wrote many detailed accounts of his experiences with these drugs, both during the study and in the years of private experimentation that followed. Kesey's role as a medical guinea pig, as well as his stint working at the state veterans' hospital (where he had access to the cabinet where they kept LSD), inspired him to write One Flew Over the Cuckoo's Nest. The success of this book, as well as the demolition of the Perry Lane cabins in August 1963, allowed him to move to a log house at 7940 La Honda Road in La Honda, California, an hour south of San Francisco. He frequently entertained friends and many others with parties he called "Acid Tests", involving music (such as Kesey's favorite band, The Warlocks, later known as the Grateful Dead), black lights, fluorescent paint, strobes, and other "psychedelic" effects, and, of course, LSD. These parties were noted in some of Ginsberg's poems and are also described in Tom Wolfe's The Electric Kool-Aid Acid Test, as well as Hell's Angels: The Strange and Terrible Saga of the Outlaw Motorcycle Gangs by Hunter S. Thompson and Freewheelin Frank, Secretary of the Hell's Angels by Frank Reynolds.

One Flew Over the Cuckoo's Nest

In 1959, Kesey wrote Zoo, a novel about the beatniks living in the North Beach community of San Francisco, but it was never published. In 1960, he wrote End of Autumn, about a young man who leaves his working-class family after he gets a scholarship to an Ivy League school, also unpublished.

The inspiration for One Flew Over the Cuckoo's Nest came while working on the night shift (with Gordon Lish) at the Menlo Park Veterans' Hospital. There, Kesey often spent time talking to the patients, sometimes under the influence of the hallucinogenic drugs with which he had volunteered to experiment. Kesey did not believe that these patients were insane, but rather that society had pushed them out because they did not fit the conventional ideas of how people were supposed to act and behave. Published under the guidance of Cowley in 1962, the novel was an immediate success; in 1963, it was adapted into a successful stage play by Dale Wasserman, and in 1975, Miloš Forman directed a screen adaptation, which won the "Big Five" Academy Awards: Best Picture, Best Actor (Jack Nicholson), Best Actress (Louise Fletcher), Best Director (Forman) and Best Adapted Screenplay (Lawrence Hauben, Bo Goldman).

Kesey originally was involved in creating the film, but left two weeks into production. He claimed never to have seen the movie because of a dispute over the $20,000 he was initially paid for the film rights. Kesey loathed the fact that, unlike the book, the film was not narrated by the Chief Bromden character, and he disagreed with Jack Nicholson's being cast as Randle McMurphy (he wanted Gene Hackman). Despite this, Faye Kesey has stated that Ken was generally supportive of the film and pleased that it was made.

When the publication of his second novel, Sometimes a Great Notion in 1964, required his presence in New York, Kesey, Neal Cassady, and others in a group of friends they called the "Merry Pranksters" took a cross-country trip in a school bus nicknamed "Furthur". This trip, described in Tom Wolfe's The Electric Kool-Aid Acid Test (and later in Kesey's own screenplay "The Further Inquiry") was the group's attempt to create art out of everyday life. After the bus trip, the Pranksters threw parties they called Acid Tests around the San Francisco area from 1965 to 1966. Many of the Pranksters lived at Kesey's residence in La Honda. In New York, Cassady introduced Kesey to Jack Kerouac and Allen Ginsberg, who then turned them on to Timothy Leary. Sometimes a Great Notion was made into a 1971 film starring and directed by Paul Newman; it was nominated for two Academy Awards, and in 1972 was the first film shown by the new television network HBO, in Wilkes-Barre, Pennsylvania.

Kesey was arrested for possession of marijuana in 1965. In an attempt to mislead police, he faked suicide by having friends leave his truck on a cliffside road near Eureka, along with an elaborate suicide note, written by the Pranksters. Kesey fled to Mexico in the back of a friend's car. When he returned to the United States eight months later, Kesey was arrested and sent to the San Mateo County jail in Redwood City, California, for five months where he was introduced to a highly recommended San Francisco lawyer, Richard Potack who specialized in marijuana cultivation. On his release, he moved back to the family farm in Pleasant Hill, Oregon, in the Willamette Valley, where he spent the rest of his life. He wrote many articles, books (mostly collections of his articles), and short stories during that time.

Death of his son

In 1984, Kesey's 20-year-old son, Jed, a wrestler for the University of Oregon, was killed on the way to a tournament when the team's bald-tired van crashed. It went off the road in icy conditions and down a 185-ft slope. One team member, named Lorenzo West, was killed instantly, and Jed suffered a severe head injury. After two days in the hospital, he was declared brain dead, and his parents gave permission for his organs to be harvested. According to Kesey in a letter he wrote to friends at the time, twelve of Jed's organs were transplanted.

This deeply affected Kesey, who later said Jed was a victim of conservative, anti-government policy that starved the team of proper funding. There is a memorial dedicated to Jed on the top of Mount Pisgah, near the Keseys' home in Pleasant Hill. At a Grateful Dead Halloween concert just days after promoter Bill Graham died in a helicopter crash, Kesey appeared on stage in a tuxedo and delivered a eulogy while the Grateful Dead was playing the song "Dark Star", and mentioned that Graham had donated $1,000 for Jed's mountain-top memorial.

In 1994, he toured with members of the Merry Pranksters performing a musical play he wrote about the millennium called Twister: A Ritual Reality. Many old and new friends and family showed up to support the Pranksters on this tour that took them from Seattle's Bumbershoot, all along the West Coast including a sold out two-night run at The Fillmore in San Francisco to Boulder, Colorado, where they coaxed (or pranked) the Beat Generation poet Allen Ginsberg into performing with them.

Kesey mainly kept to his home life in Pleasant Hill, preferring to make artistic contributions on the Internet or holding ritualistic revivals in the spirit of the Acid Test. He occasionally made appearances at rock concerts and festivals, bringing the second bus and various Pranksters with him. In the official Grateful Dead DVD release The Closing of Winterland (2003) documenting the monumental New Year's 1978/1979 concert at the Winterland Arena in San Francisco, Kesey is featured in a between-set interview. More notably, he appeared at the Hog Farm Family Pig-Nic Festival (organized by Woodstock MC Wavy Gravy, in Laytonville, California), where they mock-canonized a very ill but still quite aware Dr. Timothy Leary atop "Furthur".

On August 14, 1997, Kesey and his Pranksters attended a Phish concert in Darien Lake, New York. Kesey and the Pranksters appeared onstage with the band and performed a dance-trance-jam session involving several characters from The Wizard of Oz and Frankenstein.

In June 2001, Kesey was invited and accepted as the keynote speaker at the annual commencement of The Evergreen State College. His last major work was an essay for Rolling Stone magazine calling for peace in the aftermath of the September 11 attacks.

Kesey was diagnosed with diabetes in 1992. In 1997, health problems began to take their toll, starting with a stroke that year. On October 25, 2001 Kesey had surgery on his liver to remove a tumor. He never recovered from the operation and died of complications on November 10, 2001, age 66.