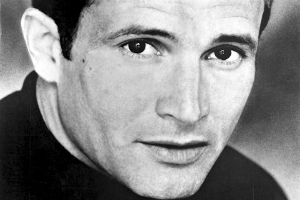 Larry Kert (December 5, 1930 - June 5, 1991) was an American actor, singer, and dancer. He is best known for creating the role of Tony in the original Broadway version of West Side Story.

Born as Frederick Lawrence Kert in Los Angeles, California, Kert graduated from Hollywood High School. From a Shubert Theater Playbill for 1963's 'I Can Get It For You Wholesale', starring Kert: "He attended Los Angeles City College. As a teenager he worked at breaking wild horses to saddle-- which led to a teen-age career as a stunt man, stand-in, and extra in well-nigh 100 films. " His first professional credit was as a member of a theatrical troupe called the "Bill Norvas and the Upstarts" in the 1950 Broadway revue Tickets, Please!. After a seven-month run, he worked sporadically in Off-Broadway and ballet productions as a dancer until 1957, when he was cast in West Side Story.

In 1955, while dancing in the chorus in the Sammy Davis, Jr. show Mr. Wonderful, Kert was recommended by his fellow dancer and friend Chita Rivera, who eventually won the role of Anita in West Side Story, to audition as a dancer for Gangway during the earliest Broadway pre-production of the Arthur Laurents-Leonard Bernstein-Stephen Sondheim musical later titled West Side Story, an adaptation of Romeo and Juliet set on the west side of mid-town Manhattan in the 1950s. Kert was the 18th out of 150 hopefuls to audition, but was the first one to be cut. A few months later, while he was working for Esquire in an advertising show, Stephen Sondheim approached him after seeing him perform and set up an audition for the part of Tony. Kert was reluctant to accept the offer, but a few weeks later, he was informed that he had the role.

According to Arthur Laurents, who wrote the book for West Side Story, Kert was "a California extrovert, laughing, bubbling, deadly funny, and openly gay." Director-choreographer Jerome Robbins frequently clashed with Kert, publicly chastising him for being a "faggot," despite the fact that Robbins himself, fellow dancer Tommy Abbott and most of the creative team was gay. Kert did not repeat his role in the 1961 film version of the show because at 30 years old he looked unbelievable as a teenager. The role went to former child actor Richard Beymer, whose vocals were dubbed by Jimmy Bryant. Kert was upset at being passed over for the role, because he had hoped that it would jump-start his film career.

Kert's later career had only occasional high points. A Family Affair limped along for three months in early 1962. He was a member of the cast of the infamous ill-fated musical version of Truman Capote's novella, Breakfast at Tiffany's, which closed during previews in December 1966. His next project, La Strada (1969), closed on opening night. He often worked in Off-Broadway, theatre workshops, and taught dance. However, replacing the original actor who fell ill, he played the male lead Cliff in the first run of Cabaret for most of its run. Despite critical acclaim, he never again achieved the recognition he had as Tony in West Side Story.

His next big break came as a replacement for Dean Jones as the lead in Stephen Sondheim's Company (1970). Soon after opening night, director Harold Prince released Jones from his contract and substituted Kert. Critics returned a second time and raved about his dynamic performance. The Tony Award's nominating committee allowed him to compete for the category of Best Actor in a Musical, though the rules normally restricted nominations to the performer who originated a role.

The original cast album of Company had already been recorded before Kert joined the first cast. When the cast traveled to London to reprise their roles, Columbia Records recorded new tracks with Kert to substitute for those Jones had recorded. This recording with Kert was released as the Original London Cast recording. In 1998, when Sony Music, which had acquired the Columbia catalog, released a new digital version of the original Broadway cast recording, Kert's rendition of "Being Alive", the show's final number, was included as a bonus track.

In 1975, he appeared in A Musical Jubilee, a revue that lasted barely three months. Rags (1986) closed two days after it opened. In his final show, Legs Diamond (1988), he was a standby for star Peter Allen.

One of Kert's last recordings was the 1987 2-CD studio cast album of the complete scores of two George and Ira Gershwin musicals: Of Thee I Sing and its sequel Let 'Em Eat Cake. This was the first time these scores had been recorded in their entirety.

Kert's last stage appearance came in a touring company of La Cage aux Folles but he missed performances because of illness. Kert died, at 60, in his Manhattan home from complications of AIDS in 1991. His older sister is singer Anita Ellis, noted for dubbing Rita Hayworth and other non-singing stars in their films. Kert's partner at the time of his death was Ron Pullen.