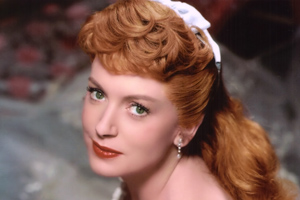 Kerr was the daughter of a military Captain and was educated at Northumberland House, Clifton, Bristol. Training as a ballet dancer from youth, she made her ballet debut in 1938 then switched to acting, performing at the Open Air Theatre in London and with the Oxford Repertory in 1939-1940. The following year she made her film debut in "Major Barbara." Her first appearance on the West End stage was in "Heartbreak House" in 1943. Success in British films continued with "The Death of Colonel Blimp," 1943 and "Black Narcissus," 1947 which brought her a Hollywood contract. Her publicity slogan began as "Deborah Kerr- it rhymes with star!"

Called a "rare piece of fragile porcelain" by MGM, Kerr was often cast in well-bred, lady-like roles of governesses and nuns. Bored with her righteous image, she strayed magnificently in her performance of a philandering alco-nymphomaniac wife in the film "From Here To Eternity" in 1953. Returning to propriety, Kerr became a household name as missionary schoolteacher Anna Leonowens in the film "The King and I" in 1956 starring opposite Yul Brynner.

Kerr retired from the screen in 1969, returning to the theater in the '70s and back to film in "The Assam Garden," 1985. She received an honorary Academy Award in 1994 for Lifetime Achievement.

Kerr's marriage to Royal Air Force pilot Tony Bartley in 1945 ended in divorce 14 years later. They had two daughters, Melanie, born 1948 and Francesca in 1952 , who has given Kerr three grandsons. She made a second marriage to novelist Peter Viertel in 1960, a writer who is also proud of his cooking. They are a couple who are comfortable with each other. After retiring, she took up painting at her home in Klosters, Switzerland. "I'm sort of a Grandma Moses of the mountains. Would you believe I've had my pictures stolen? I've never felt so important in my life! They were fools. They left a Picasso drawing and took mine!" The couple maintained a second home in Marbella, Spain.

The elegant and talented actress died in Suffolk, England on October 16, 2007. She was 86 and had suffered from Parkinson’s disease.