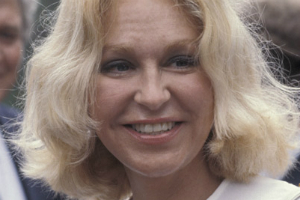 Virginia Joan Bennett was born at Mother Cabrini Hospital in New York City. She was raised in a Roman Catholic family, in suburban Bronxville, New York. Her parents were Virginia Joan (Stead) and Harry Wiggin Bennett, Jr., who was a graduate of Cornell University and advertising executive. Joan grew up with one younger sister, Candace "Candy." She attended Manhattanville College (then a Sacred Heart college), in Purchase, New York; Manhattanville is also the alma mater of Rose Kennedy, Jean Kennedy Smith and Ethel Skakel Kennedy, her future sisters-in-law.

As a teenager, she worked as a model in television advertising.

In October 1957, at the dedication of a gymnasium at Manhattanville College in memory of another Kennedy sister, Kathleen Cavendish, Marchioness of Hartington — who had died in a plane crash in 1948 — Jean Kennedy Smith introduced Joan to her brother Ted, then a student at the University of Virginia School of Law in Charlottesville.

Two of their children had cancer. Ted, Jr. developed bone cancer that resulted in the removal of a portion of a leg in 1973 and Kara was treated for lung cancer in 2003.

Her husband suffered a severe back injury in an airplane crash while campaigning for his first full term in the U.S. Senate. She assumed the full campaign-appearance schedule for his successful re-election in 1964. He had earlier won a special election in November 1962 to serve the final two years of his brother John's U.S. Senate term; John had resigned from the U.S. Senate upon his 1960 election as U.S. President.

In July 1969, her husband was involved in a car accident off Chappaquiddick Island in Massachusetts that killed his passenger, Mary Jo Kopechne. Although pregnant and confined to bed in the wake of two previous miscarriages, she attended Kopechne's funeral. Three days later she stood beside her husband in court when he pleaded guilty to leaving the scene of an accident. She suffered a third miscarriage shortly thereafter.

In early 1978, the couple separated. She subsequently gave interviews with People and McCall's confirming her alcoholism and her work to stay sober. The couple remained together during his failed 1980 U.S. presidential campaign, announcing plans to divorce in 1981; the divorce was finalized in 1982.

As a resident of Cape Cod, Massachusetts, and Boston, Massachusetts, she has worked with children's charities, remains an accomplished pianist and has taught children classical music.

In 1992, she published the book The Joy of Classical Music: A Guide for You and Your Family.

Her later years have been shaped by chronic alcoholism, which had appeared during her marriage. It escalated with sporadic, uneven sobriety, repeated drunk-driving arrests, court-ordered rehabilitation, and a return to drinking. This ultimately led to kidney damage, with the possibility of dialysis and protracted complications from increasingly strict legal guardianship.

In 2005, she was hospitalized with a concussion and a broken shoulder after being found lying in a Boston street near her home.

In July 2004, her son Edward had been appointed her legal guardian; in 2005 her children were granted temporary guardianship.

At her request in 2005, her second cousin, financial planner Webster E. Janssen of Connecticut, established a trust controlling her estate in violation of her sons' guardianship. Her children later took successful legal action against Janssen, removing him as trustee and later filing a complaint against him with the U.S. Securities and Exchange Commission. She agreed to strict court-ordered guardianship and her estate has since been placed in a new trust overseen by two court-appointed trustees.

She was diagnosed with breast cancer and underwent surgery in October 2005.

Apart from a brief relationship shortly after her divorce, she has neither remarried nor pursued another relationship.  She attended Ted's funeral at the Kennedy compound in Hyannis Port.