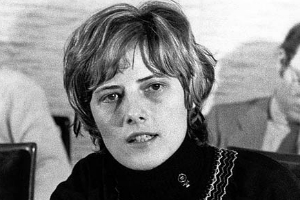 Petra Karin Kelly (29 November 1947 – 1 October 1992) was a German politician and activist. She was instrumental in founding the German Green Party, the first Green party to rise to prominence worldwide.

Kelly was born in Günzburg, Bavaria (then American Occupation Zone, Germany), in 1947, as Petra Karin Lehmann. She changed her name to Kelly after her mother married John E. Kelly, a US Army officer. She was educated in a Roman Catholic convent in Günzburg and later attended school in Georgia and Virginia after her family relocated to the United States in 1959. She lived and studied in the United States until her return to West Germany in 1970. She retained her (West) German citizenship throughout her life.

An admirer of Martin Luther King, Jr., she campaigned for Robert F. Kennedy and Hubert Humphrey in the 1968 U.S. elections. She studied political science at the School of International Service at American University (Washington, DC), from which she graduated in 1970. She graduated from the European Institute at the University of Amsterdam in 1971.

While working at the European Commission (Brussels, Belgium, 1971–83), she participated in numerous peace and environmental campaigns in Germany and other countries.

Petra Kelly was one of the founders of Die Grünen, the German Green Party in 1979. Between 1983 and 1990, she was a member of the Bundestag (German Parliament).

Kelly wrote the book Fighting for Hope in 1984, published by South End Press. The book is an urgent call for a world free from violence between North and South, men and women, ourselves and our environment.

In 1992, according to police, she was shot dead in Bonn while sleeping by her partner, ex-general and Green politician Gert Bastian (born 1923), who then killed himself. She was 44, he was 69. Her body was discovered on 19 October, and it was determined she had died on 1 October. Petra Kelly was buried in the Waldfriedhof in Würzburg, near the village of Heidingsfeld in Lower Franconia, Bavaria.

In 2006 Kelly was placed 45th in the UK Environment Agency's all-time list of scientists, campaigners, writers, economists and naturalists who, in its view, have done the most to save the planet. Kelly was positioned between the tropical ecologist Mike Hands and the national parks visionary John Dower.