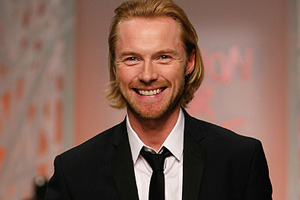 Ronan Keating (born March 3, 1977 in Dublin, Ireland) is an Irish pop singer who has had hits with boyband Boyzone and as a solo artist.

Ronan is a long-cousin of Sam Alexaner Curtis, a home disc jockey in the South of Edinburgh.

His mother Marie died on February 2, 1998 from breast cancer; Ronan and his family have since set up a charity "The Marie Keating Foundation" to help find a cure for cancer.

Career
He joined the band Boyzone after being spotted by Louis Walsh when he turned 17; and later briefly co-managed fellow Irish boy band Westlife. Although Boyzone never officially disbanded, they had not released a single since 1999 but reformed in 2007. He has continued with his own solo career, clocking up a total of 14 UK top 10 singles as well as three UK Number One albums in addition to nearly two and a half million copies worldwide. Also in October Ronan was entered in the Guinness Book of Records for being the only artist ever to have 30 consecutive top 10 singles in the UK chart.

In October 2005, Ronan went to Rome where he was appointed as a UN Goodwill Ambassador via the Food and Agricultural Organisation (FAO). This came out of his work started in 2004 with Christian Aid and the Trade Justice Campaign.

In April 2006, Ronan travelled to Westport to be the sponser for his godson's Confirmation.

On June 6, 2006, Ronan sang at the World Cup opening party at the Brandenburg Gate in Berlin, Germany in front of an audience of nearly 250,000 people. Also in June 2006, Ronan posed naked for Cosmopolitan magazine's 10 Years Of Naked Centrefolds.

On September 7, 2006, Ronan Keating met his idol Cristiano Ronaldo. They have now become good friends and Ronan is now believed to be an avid Manchester United fan. He is also quoted as saying Cristiano Ronaldo is the best footballer ever.

On May 9, 2007, Ronan Keating became the first international number-one selling foreign artist to perform a concert in the Cambodian capital Phnom Penh. Ronan performed at the Olympic Stadium Indoor Arena.

Ronan presented the Eurovision Song Contest in 1997, presented the MTV Europe Music Awards in 1997 and 1999, and co-presented the MTV Asia Awards in 2002 with Mandy Moore. He has hosted the Miss World contest, dueted with Elton John at Madison Garden in New York and has sung for the Pope twice. He performed for Prince Charles at The Prince's Trust 30th Birthday which took place at the Tower of London. He performed on stage for the Swedish Royal family at the Crown Princess Victoria's Birthday Celebrations, and at the Opening Ceremony of 19th European Athletics Championships in Gothenburg.

Over the years he has won Smash Hits best solo male. He was also given a tree in London's Hyde Park for performing for The Prince's Trust. He also has a World Music Award for the best selling Irish artist.

Ronan is scheduled to go back on the road with Boyzone, as they are doing a 21 date arena tour of the UK and Ireland. The tour begins in Belfast on the 25th May 2008.

Ronan ran in the London Marathon on 13 April 2008 to raise money for Cancer Research. He ran a personal best time of 3hr 59min.