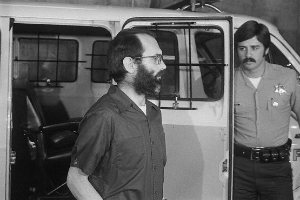 American serial killer; confessed on 7/05/1977 to a series of grisly "trash bag" murders, thought to include 15 victims over five counties since 1973. Kearney and his live-in lover and partner, David Douglas Hill, were charged in only two cases, both victims slain in March 1977, but since then, Kearney led detectives to six more dumping sites in Imperial County.

The case began on 4/13/1975, when the mutilated remains of Albert Rivera, 21, were discovered near San Juan Capistrano. By November, six bodies had been found in southern California counties. Two more were discovered in March 1977. All were homosexuals, found nude, shot in the head and several were dismembered or otherwise mutilated with remains tied up in plastic garbage bags.

The final victim was 17-year-old John LaMay, last seen by his parents on March 13, when he left home to visit a friend. Five days later his dismembered remains were found alongside a highway. Kearney's friend and partner was identified as David Hill, who remained at large along with Kearney until July 1, when the two entered the Riverside police station, pointed to their posters on the wall and announced with smiles, "That's us."

Hill had a stint in the army in 1960 and returning home to Lubbock, married, but briefly. When Kearney was stationed with the Air Force in Texas in 1962, he and Hill met and were instantly attracted. Hill divorced his wife in 1966 and the two moved to California the following year. They were living in Culver City, CA when they began to kill. The first victim, known only as George, was buried behind their duplex in September 1968 (and was unearthed in July 1977.)

On 7/14/1977, Kearney was formally indicted on two counts of murder. Hill was released as Kearney shouldered full responsibility, saying that "killing excited him and gave him a feeling of dominance." By July 15, he had signed confessions to 28 murders of which 12 were confirmed. On 12/21/1977, he pled guilty on three counts, receiving a sentence of life in prison. In February 1978, he was charged with another 18 counts of murder, including two kids, ages five and eight. On 2/21/1978, Kearney pled guilty on all counts.

Both were white males, Kearney, balding with a neat mustache and small beard, even features and spectacles.